I don’t usually write about multiple Guilty Pleasures in one post. But the sci-fi/action films, Battle: Los Angeles (2011) and Battleship (2012) have much in common, so this seemed to make perfect sense.

With that tagline, Battle: Los Angeles opens with scenes of meteor showers taking place around the globe. The thing is, these “meteors” are all landing in various oceans just off the coast of major cities. Does this seem like coordinated actions? Duh. At least the governments are wary enough to order mass evacuations.

These nasty aliens did not come to L.A. for sun and surf.

At Camp Pendleton in Southern California, war-weary Marine Staff Sergeant Michael Nantz (Aaron Eckhart) is about to begin his retirement as the meteors—which conceal alien ships—bombard the waters off L.A. Nantz is tasked with supporting a green second lieutenant as he leads a platoon north to see just what is going on. By the time they reach L.A. the aliens have revealed themselves, and they have not come here to take the Universal Studios tour. Using an array of devastating weapons, they have just about laid waste to the city.

Nantz’s platoon is ordered to rescue a number of civilians that are hiding in a Santa Monica police station, before the Air Force carpet bombs the entire area. (The aliens do not appear to have air support.) Advancing through a war zone, they suffer casualties but are able to reach the civilians. A chopper arrives to carry off the wounded marines but is destroyed in flight by alien drones. So much for no air support.

Therein lies the balance of the film. The remaining marines must escort the civilians, including a number of children, through the ravaged city. Predictably, the officer in charge will be killed, and Staff Sergeant Nantz will reluctantly take command of the platoon. The action is non-stop, and viewers will barely have a chance to breathe. 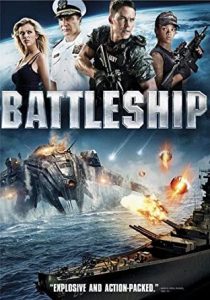 THE BATTLE FOR EARTH BEGINS AT SEA

In Battleship, loosely based on the old Hasbro board game, the nasty aliens arrive by invitation. (I’m not making this up.) A communications array, built by NASA on a Hawaii mountaintop, has been sending messages to a planetary system that appears to have an Earthlike planet. So down they come, hell-bent on colonization. Four humongous ships plummet into the ocean off Oahu (a fifth, deflecting off a satellite, crashes in Hong Kong) as the fleets from a number of countries take part in RIMPAC exercises.

An officer on the USS John Paul Jones, Alex Hopper (Taylor Kitsch; yeah, John Carter!) is in danger of receiving a disciplinary discharge due to some questionable behavior. When one of the alien warships surfaces, Hopper and his team investigates. The warship destroys a number of other nearby vessels, as well as the commander of Hopper’s ship, leaving him in charge—quite reluctantly, to be sure. The aliens then raise a force field around their warships (I’m not making this up!), leaving the John Paul Jones as the sole impediment. Hopper must dig deep to find a way of stopping the aliens.

That is one mother of a warship!

The alien ship that crashed was a communications vessel that would have immediately contacted its home planet after establishing how ineffective these Earthlings were in stopping them. Many more invaders would have been on their way. Now, the aliens would have to utilize the communications array on Oahu, but only after an orbiting satellite was in position, hours later. That’s how long Alex Hopper has to save the planet.

One subplot that I enjoyed: Hopper’s girlfriend, Sam, is a physical therapist and is working with a double amputee, Mick Canales, a retired U.S. Army officer. He is an embittered man with nothing left to live for, he believes. The strong-willed Sam (daughter of the Fleet’s admiral), urges him to hike with her up a mountain—yep, the one on which the communication array sits. You can take it from there. 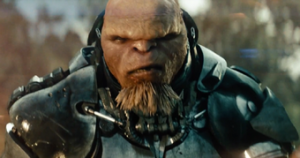 This alien appears a bit perturbed.

I’m sure you can see the similarities in these two films. Battleship even outdid Battle: Los Angeles in garnering a number of Razzie nominations. Still, I’ll be watching both of them a few more times before the good aliens—those on my Mother Ship—return to take me home.