The Florida city of St. Augustine, located on the Atlantic coast and founded in 1565 by explorers from Spain, is the oldest European-established and occupied settlement in the U.S. It is also home to one creepy old haunted lighthouse—if you can believe the legends.

A HAUNTING FOR ALL TIME 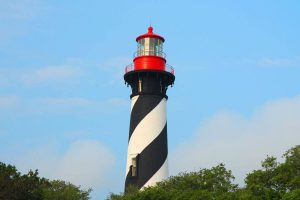 The lighthouse was built in 1824 on the site of an earlier Spanish watchtower. Its original owner, Dr. Alan Ballard, lived on the property throughout his life. His lighthouse keeper, Peter Rasmussen, was a cigar smoker, and long after his death the scent of his cigar smoke still wafts through the site.

Another one of Ballard’s keepers, Joseph Andreu, died in a fall from the lighthouse tower. His footsteps can be heard on the tower steps, and his spectral figure is sometimes spotted on the top of the lighthouse.

After the Civil War the government attempted to buy the lighthouse from Ballard. His refusal to sell prompted officials to threaten eminent domain and simply take it from him. This action pissed Ballard off no end. He moved into the lighthouse and vowed that he would never leave. Apparently he wasn’t kidding, because even after he died, his ghost was spotted countless times in the lighthouse and the on surrounding grounds. 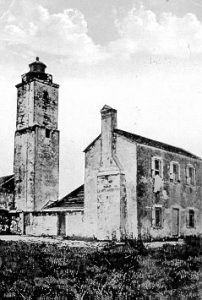 In the late nineteenth century a man named Hezekiah Pity was hired to perform renovations on the lighthouse. Pity often brought his two daughters, 15-year-old Mary and 13-year-old Eliza, along with him. The girls would play while their dad went about his work, their laughter echoing all around the grounds.

Pity used a cart to haul building supplies to the lighthouse, and he often warned the girls to stay clear of it, lest it slide down a hill to the bay. One day, feeling emboldened, the giggling teens climbed into the cart to mess around. Perhaps it was the added weight that caused it to break free from where their dad had tied it, but whatever the case, it hurtled down the hill and cast Mary and Eliza into the bay, where they drowned.

Well over a century later, the teens’ laughter can be heard echoing through the tower in the dead of night. Mary’s ghost has also been spotted walking the grounds, the older sister still dressed in the blue velvet gown and bow that she wore on the day she died. 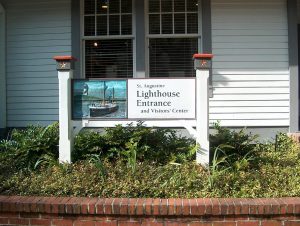 The newly renovated St. Augustine Lighthouse was put into service in 1874; the ghosts that perished there still remain. Although some paranormal researchers have tried to debunk most of the sightings, the lighthouse remains the subject of many ghost tales and supernatural legends. It has been featured on the TV series, Ghost Hunters, as well as Most Terrifying Places in America. The St. Augustine Lighthouse & Maritime Museum offers a “Dark of the Moon” ghost tour, as well as ghost-themed events. Check out their website.

If these tales are true, then the spirits that linger in and around the lighthouse are, sadly, tormented souls. Let us hope they can find some semblance of peace in order to move on.