H.G. Wells told some pretty amazing stories, considering how long ago he wrote them. This post first ran in 2014. 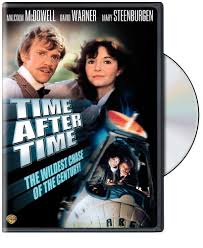 My previous posts in the “Films About Writers” series, Finding Forrester and Misery, featured fictional writers. In the 1979 movie, Time After Time, we have a real writer, H.G. Wells, put into a fictional story—with some interesting results.

Wells—referred to as Herbert, his first name, throughout the film—was a futurist who authored a number of sci-fi classics, including War of the Worlds, The Invisible Man, The First Men in the Moon, and, of course, The Time Machine, which inspired Time After Time. A strong believer in the equality of women, Wells also visualized a socialist utopia free of poverty and war.

A CHASE THROUGH TIME—TO CATCH JACK THE RIPPER 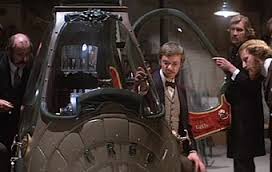 Herbert shows off his time machine.

The film opens in 1893, where the reign of terror by Jack the Ripper continues with another murder. The Ripper is a doctor named John Stevenson (David Warner), who happens to be a friend of Herbert Wells (Malcolm McDowell). His dastardly deed makes him late for a dinner party thrown by Herbert for a bunch of his colleagues, but he arrives in time to hear Herbert’s big announcement. Impatient to see his idea of utopia in action, Herbert has built a time machine in his basement to check it out. All except Stevenson scoff at him.

Scotland Yard tracks Stevenson to Herbert’s place, and bloody gloves are discovered in Stevenson’s medical bag. But where has Jack the Ripper gone? Yep, into the future in Herbert’s time machine. Fortunately, Herbert holds a key that would’ve kept the machine wherever the Ripper took it, so the machine returns to its origin. Herbert sees that the machine came back from 1979 San Francisco, so off he goes.

Surprise, Herbert turns up in a museum—in the middle of an exhibit honoring the life and work of H.G. Wells! At least he’ll know where the time machine is when he needs it. But once outside, he sees that his socialist utopia has failed to materialize. Wars, murders, bloodshed, pollution—the usual—dominate the 20th century. Bummer.

Herbert is rather taken by his fame.

But, first things first—find Jack the Ripper and drag him back to 1893 to answer for his crimes. Herbert guesses that Stevenson will try to cash old British pounds for dollars—something he also needs to do—so he visits bank after bank, but with no luck, until he stops at the Chartered Bank of London, where employee Amy Robbins (Mary Steenburgen), a liberated woman who finds the oddly dressed Herbert interesting, confirms that Stevenson had indeed stopped there. She had suggested a hotel to the Ripper, so off Herbert goes.

At the hotel, Herbert confronts his former friend. Stevenson feels right at home in this violent new world and plans on staying a while. He demands the return key from Herbert to prevent him from further pursuing him. They fight, but Stevenson flees after they’re interrupted by a hotel worker. A chase ensues; Stevenson is struck by a car, and Herbert believes that he has died. Not so, of course.

Herbert begins a relationship with Amy, who has aggressively come on to him. Although he advocated free love in the 19th century, he’s at first taken aback, but it goes well. Meanwhile, reports of women being brutally murdered begin showing up, and Herbert suspects that Stevenson is still around. He tells Amy to keep an eye out for him at the bank, and when the Ripper indeed returns to cash more money, her nervous behavior convinces him that she was the one who tipped Herbert off. Stevenson, who by this time has killed three women, manages to obtain her address. 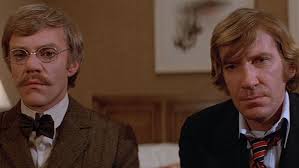 Herbert can’t seem to get through to Jack the Ripper.

Herbert decides to tell Amy the incredible truth, and she naturally thinks that he’s out of his mind. He takes her to the time machine and they travel three days into the future, where a newspaper reveals that she is the Ripper’s fifth victim. They return to the present, determined to save the fourth victim and, of course, Amy. She urges him to go to the police, which he does, but they think his story is bullshit and decide to keep an eye on him.

They arrive too late to save the fourth victim, and Herbert is arrested on suspicion of murder. His only concern is Amy’s well-being, but the cops won’t let him go. The terrified Amy is stalked in her apartment by the Ripper. When the cops finally check on her, they find a dismembered body. They release Herbert, who is devastated.

SPOILER ALERT: But the victim turns out to be a friend that Amy had invited for dinner. Stevenson is holding Amy hostage and says he’ll trade her for the return key, which Herbert gives him. Still, he holds on to her until he reaches the time machine, and Herbert continues to plead for her life. Amy breaks free, and Stevenson locks himself in the time machine. But before he can leave, Herbert yanks a “vaporizing equalizer” from the outside of the machine. (The plot point was foreshadowed earlier.) This device will send the occupant of the machine hurtling endlessly through time, destroying him. Goodbye Jack the Ripper.

The Ripper is not giving Amy a shave.

Herbert tells Amy that he will return to Victorian England and then destroy the machine. Amy pleads with him to come along. The final credits reveal that they were married.

While the 1970s special effects in Time After Time are kind of cheesy, the film is elevated by the excellent performances of its three stars. I hadn’t seen this film in a long time, and it was great revisiting an old friend.

A couple of side notes: H.G. Wells married one of his students in 1895. Her name was Amy Robbins. Also, Malcolm McDowell and Mary Steenburgen fell in love while filming Time After Time and were married for over a decade—an eon for a Hollywood marriage.