Authors, athletes, actors—heck, just about everyone in the public eye—all have a Number One Fan. Or two. Or a thousand. Even I had some Number One Fans back in the day. Sounds like an interesting topic for a post—which will appear next week.

Today we’ll talk about Paul Sheldon’s Number One Fan. Sheldon is a bestselling 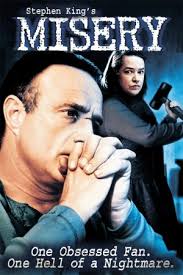 novelist in Stephen King’s 1987 claustrophobic novel, Misery, and in Rob Reiner’s excellent 1990 film version, with James Caan playing Sheldon. The spare title has a double meaning: it’s the name of the lead character, Misery Chastain, in Sheldon’s successful Victorian era romance novels, and it is the nightmare that Sheldon is about to endure in the story. William Goldman wrote an outstanding screenplay based on the book.

PAUL SHELDON USED TO WRITE FOR A LIVING—NOW, HE’S WRITING TO STAY ALIVE

Despite having great success with his Misery Chastain novels, Paul Sheldon has burned out in writing so many stories about her. He wants to write something more…well, serious. In the latest Misery novel, due out shortly, he’s killed the poor girl off, a great catharsis—and closure—for him.

A creature of habit, Paul has written nearly all of his books in a cozy cabin up in the Rockies. His new, serious novel is no exception. Having just finished it, he plans on driving back east to bring his New York literary agent (Lauren Bacall) the sole draft of the manuscript. Snow is falling as Paul drives down the winding mountain road, and it soon turns into a blizzard. The car goes off the road and rolls over. Critically injured, Paul is rescued by a heavily bundled figure and carried off. When he regains consciousness he finds himself in a warm bed inside a remote cabin. His broken legs and dislocated shoulder have been tended to by his rescuer, a nurse named Annie Wilkes, who stands smiling at his bedside, pain pills at the ready. 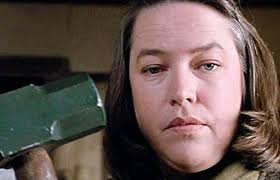 Annie is quite handy with tools.

Meet Annie Wilkes (Kathy Bates, in her brilliant, Academy Award-winning performance), who is at least twenty-seven cans short of a six-pack. Get the point? A whack job extraordinaire, Annie at first comes off as the sweetest, most caring person on the planet. She won’t even spout a cuss word, instead using adjectives like “oogy” and “cockadoody,” and she has a pet pig named Misery. Yes, she says, she’s let everyone know that Paul is there, but because of the horrible weather it would be best if he stayed put for a while, especially since she’s qualified to take care of him. She even reveals that she loves all of Paul’s Misery novels, that she’s his Number One Fan. Oh crap…

While we get a few glimpses of Annie’s odd behavior early on, Paul is grateful to her for saving his life. To thank her, he offers to let her read his new manuscript. Uh-oh, bad call. She goes off on him about the subject matter, and all of the bad language. Paul has now come to suspect that Annie is a bit…uh, disturbed.

With the weather improved, Annie drives off to town to pick up her copy of the new Misery novel. Though in pain, Paul works his way to the door with the hope of getting to a phone. Surprise: Annie has locked him in.

Annie returns with the book and is thrilled to begin reading it. Every few chapters or so she comes in to praise Paul for his wonderful writing. Paul can’t wait for her to finish the book…not!

Annie goes bat-shit crazy when she learns that Misery dies at the end, and she nearly puts a table upside Paul’s head. How could he do such a thing! She then reveals that she hadn’t notified anyone of what happened, that no one knows he is there and they likely believe that he’s dead. She doesn’t even have a workable phone.

Indeed, the local sheriff, Buster (Richard Farnsworth), has been searching for Paul. He’s found the car buried under the snow, and the consensus is that Paul managed to get out and wander off, only to die. His body will show up in the spring. But he wonders about the marks on the car door that indicated a crowbar might have been used to pry it open. Curious about this occasional visitor to his jurisdiction, he starts reading some of Paul’s novels. 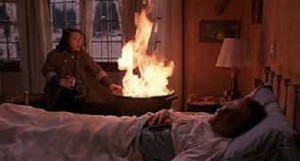 The next morning a calmer Annie hauls in a barbecue grill and tells Paul to burn his new manuscript. For emphasis she “accidently” splashes some lighter fluid on his bed. She also orders him to write a new book titled Misery’s Return, in which he’ll bring Misery back to life. Convinced that Annie is psycho enough to kill him, Paul agrees to both.

Now in a wheelchair, Paul manages to get out of his room while Annie is away. He stockpiles painkillers in his mattress (Annie has a shitload of them, stolen from the hospital where she worked) and manages to cajole Annie into a candlelight dinner, where he spikes her wine. But she accidently spills it.

Annie has set Paul up with an old typewriter and paper, but Paul insists on a different kind of paper, so off to town she goes. He explores the ground floor of her house again, this time finding a scrapbook. Shocker: Annie might have killed a fellow nursing student, and her husband, and a number of infants in the hospital, but each time she managed to beat the charges. (In King’s novel the possible body count for suspected serial killer Annie Wilkes was in the dozens.) She even quoted lines from some of Paul’s books during one of her trials. 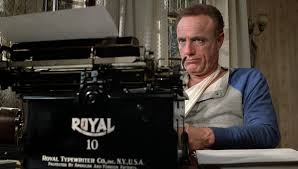 Paul tries to meet the deadline for his new book.

With the new Misery novel nearly done (in the book, King presents actual pages from Misery’s Return), Paul awakens one morning to find himself strapped to the bed. Annie has discovered that he’s gotten out and has decided to “hobble” him. The ensuing scene, in which she smashes both of his feet with a sledgehammer, is disturbing, and was voted Number 12 on Bravo’s 100 Scariest Movie Moments. Check out the video. (Could’ve been even worse: in the book she slices off a foot and a finger.)

SPOILER ALERT: The sharp-witted Sheriff Buster soon makes a connection between Paul and Annie. As he drives up to her cabin, Annie deposits Paul in the basement. Buster searches the place, and when he sees Paul in the basement, Annie takes him out with a shotgun. She then tells Paul that they must die together. He agrees, but only if he can finish the novel so they can “give Misery back to the world.”

Paul has concealed a can of lighter fluid. When the manuscript is done, he douses it and puts it on the floor. Annie had given him a match to light up his celebratory cigarette after finishing a book. He lights the manuscript, and when a screaming Annie gets down on the floor to save it, he clocks her with the heavy typewriter. But she’s a psycho bitch and doesn’t go down easily. He finally kills her with an iron statue of a pig. (The confrontation in King’s book is a bit more convoluted.)

Flash forward eighteen months: although walking with a cane, a dapper Paul Sheldon meets his agent for lunch in New York. His new, serious novel is a roaring success. Maybe he’ll write about his nightmare in Colorado, she suggests. Hell no, he replies. As they talk, a server approaches with a dessert tray. Oh shit, it’s Annie Wilkes! No, it’s another woman…just a trick of his troubled mind. The woman approaches the table, a smile on her face. Can you guess what she says to Paul?