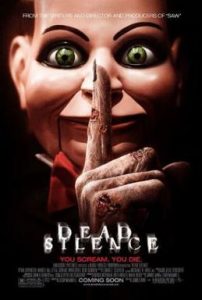 Horror producer/director James Wan has been associated with a number of successful films, including the Insidious franchise and the (mostly) awesome Conjuring Universe. But his 2007 effort, Dead Silence, is not exactly one of those successes. Bad reviews (20% on Rotten Tomatoes) and poor box office make this an ideal Guilty Pleasure because, as you well know by this time, I am easily entertained.

With that tagline, here is a brief overview of what could also have been called “Horror for Dummies.” A guy named Jamie Ashen and his pregnant wife, Lisa, find an anonymous gift on their doorstep: a ventriloquist’s dummy named Billy. Simply taking it at face value (oy!), Lisa starts playing with it as Jamie goes out to pick up their dinner. When she sees a strange figure in their apartment, Lisa screams. Jamie returns to find her dead, her tongue cut out. (I’m not making this up.)

Lipton (r) has no clue about what is going on.

Jamie is questioned by a homicide detective named Lipton but is released for lack of evidence. When he goes home and tears open the dummy’s box he finds a cryptic message about a deceased ventriloquist named Mary Shaw, who just happened to have lived in Jamie’s hometown of Raven’s Fair.

With Billy in tow (and Lipton on his tail), Jamie returns to Raven’s Fair and confronts his estranged, wheelchair-bound father, Edward, and his young wife, Ella, demanding to know what Mary Shaw had to do with the Ashen family. He doesn’t learn squat from them, but he finds out more from the local mortician, Henry Walker, and his senile wife, Marion, when he makes arrangements for Lisa’s funeral. Seems that Mary Shaw was a quite famous ventriloquist back in the day, but during one performance a young boy named Michael Ashen—Jamie’s uncle—announced that he could see Mary’s lips moving, which really pissed her off. (In a flashback we see both Mary and her dummy, Billy, talking at the same time…creepy!) Michael later disappears, and the family, blaming Mary, lynches her.

COMPANY IN THE GRAVEYARD

Henry Walker’s father was the mortician back then, and he followed Mary Shaw’s instructions to turn her dead body into a dummy (I’m not making this up) and bury her with her 101 other dummies (I’m not making this up). Henry’s senile wife somehow knows that Mary’s spirit is dangerous and will kill anyone who screams. (Don’t ask me how she knows this.)

Jamie goes to the graveyard and buries Billy next to Mary and all the other dummies, but of course Billy pops right back up. Meanwhile, Mary’s ghost kills Henry Walker and rips out his tongue. With Lipton still on his tail, Jamie heeds a weird phone call from “Henry” and goes out to an old, abandoned theater to meet him. All of the ultimate shit will hit the fan in this creepy building, as well as back at the Ashen mansion, where dear old dad is not quite what he appears to be. 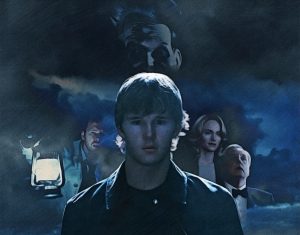 One reviewer noted that Dead Silence failed due to “…boring characters, bland dialogue, and an unnecessary and obvious twist ending.” Yeah, I suppose he hit the nail on the head. For me, this film qualified in the category of “so-bad-that-it’s-good,” because it sure provided a fair share of unintentional laughs. Ah, such is the world of Guilty Pleasures!