Bernie Smith Is Back!

Indeed he is, still the reluctant hero in my recently published novel, The Horrors of Harrmel. Bernie first appeared in my 2016 Sword & Planet spoof, The Wizard from Harrmel, where he was zapped up from an Iowa cornfield and deposited on the deadly planet of Persus. There, amid numerous weird and wild adventures, he and the woman of his dreams, the beautiful and brilliant Thanna Dora, must face off against the nastiest of the nasty, the evil wizard from the dark land of Harrmel—the notorious Heevit Upp! 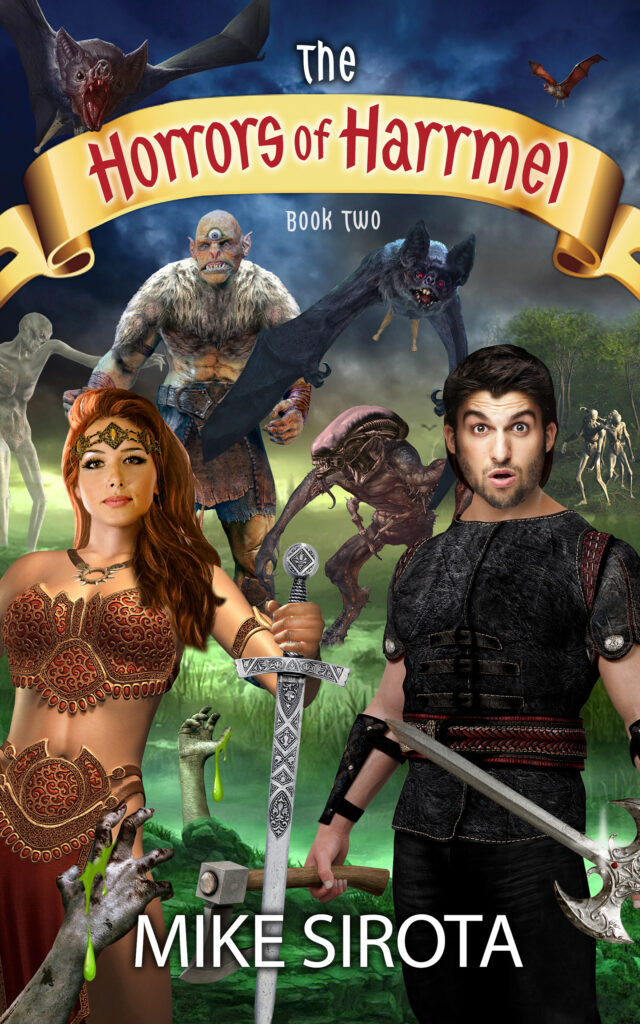 In The Horrors of Harrmel, Bernie and Thanna Dora journey into the dark land to find her long-lost father, Skreen Dor. Along the way they will encounter, among other nightmares, mole-guys, bat creatures, walking dead folks in a suicide forest, spastic specters in a spooky swamp, cannibals, big-ass bugs, dog-things, and more—before it starts getting really nasty. To save Thanna Dora’s dad they will ultimately have to face the evil wizards known as—the Uppidi. And that’s when it gets even worse.

Speaking of bat creatures, here is a scene from the story. Bernie and Thanna Dora are journeying through the dangerous caves of Harrmel when they enter a grotto where huge bats are hanging from the walls and ceiling:

We set off across the chamber, careful not to kick any rocks or stumble in a hole. I’d expected mounds of guano, as large as these creatures were, but nary a turd did we see. Nor did we smell any ammonia. As we reached the halfway point I thought, maybe these weren’t bats after all…

Nope, they were bats, because a dozen or so unfurled their wings and flapped leisurely down to the cavern floor, setting up a picket fence right in our path. Oh crap!

Standing frozen, with Thanna Dora squeezing my hand bloodless, I stared at the creatures. I’d read about flying foxes in grade school, and that’s what these things looked like, only one hell of a lot bigger. They had long snouts, wide eye sockets, and small ears; they kind of resembled pissed-off dogs. Their wingspan, I noticed on their way down, was about ten feet, nearly double that of an average flying fox. Instead of the usual forelimbs they stood—or tottered—on what I swear looked like the peglegs you see on pirates.

We took a few steps backward as more of the creatures flapped leisurely to the cavern floor. A quick glance over my shoulder revealed another picket fence. They continued to float downward, until the ceiling of the grotto was bare, and they surrounded us on all sides, though none stood any closer than thirty feet.

“My love, I believe we did not choose wisely this time,” Thanna Dora uttered, by way of…yeah, you know.

I held off drawing a weapon in order to see how this would play out. For another half-minute or so an eerie silence pervaded the chamber as these giant bats stared at us with their wide eyes. Then, a single bat broke free from the picket line in front of us and did a double Pegleg-the-Pirate clatter as it approached us slowly. Thanna Dora let go of my hand and grasped the hilt of her sword, but I would not let her draw it; not yet.

The bat stopped about ten feet away. It looked us up and down before opening its mouth. Wide. Lots of teeth, including some long, nasty canines. I grasped the hilt of my sword.

“Who the hell are you?” the bat hissed.

Okay, we let go of our weapons and just stared, because…the bat talked.

“Uh, no, sorry,” I managed to squeak out. “We hadn’t seen anyone in the caves for…well, for a long time, so you kind of took us by surprise.” 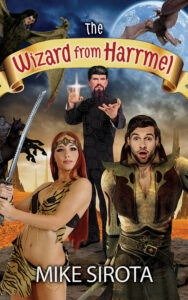 Thanna Dora, far more diplomatic than me, stepped forward and flashed her dazzling smile as she introduced us. “We are just passing through your lovely grotto—with your permission, of course—and will be gone in no time,” she added. Yes, my bride exceled at bullshit.

Clearly it worked, because the creature twisted its mouth into what I think was a smile and proffered a slight bow. “I am Akro Bhat, the leader of my people.” He turned and gestured toward the picket fence with one of his peglegs. Four of them tottered forward to join him. “This is my mate, Walkda Bhata, my two sons, Ding Bhat and Wom Baht, and my daughter, Hitda Bhata.”

They all looked identical in every way, so I had to hope there wouldn’t be a quiz later. All of them duplicated Akro Bhat’s nifty little bow, and we reciprocated in kind.

“Now, since it is not our way, I will not inquire as to your destination,” the leader said. “The two of you have my permission to pass through our home. You need simply pay the toll.”

“Yes, a toll. Surely you possess some items of value. We cannot let you pass for nothing. Do you think we’re batty or something?”

Again that loud hissing as all of them cracked up. “What you see is what we have.” I opened my pouch; Thanna Dora did the same. “Our dwindling food and water supplies, some medicinals, that’s about it.”

Akro Bhat said nothing for about a minute, which made us a mite nervous. Finally, after a sputtering hiss, he pointed a pegleg at Thanna Dora. “Very well then, we will keep your female. I am certain she will be tasty.”

Yes, just one more obstacle for Bernie Smith and his “amazing hill beauty” to overcome in this dreaded land. The Horrors of Harrmel is available from Amazon in eBook and paperback. Enjoy!