This Soggy Sequel Should’ve Been Deep-Sixed 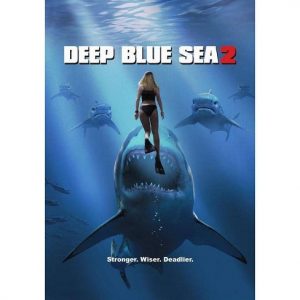 Like so many sequels before it, did the direct-to-video Deep Blue Sea 2 really need to be made? As a big fan of its predecessor, Deep Blue Sea, I of course had to watch it. (See my post, “Spiders, Bats, And Sharks: Critter Nirvana.”) Wow, what a downer. I should’ve taken its Rotten Tomatoes score of 0% (yes, zero!) as a warning.

While marketed as a sequel, Deep Blue Sea 2 bears a bunch of similarities to Deep Blue Sea. Experiments on sharks to make them larger and smarter are taking place at ocean-based facilities that are mostly submerged. Both are financed by rich guys, one an investor, the other a hands-on (mad) scientist. The latter’s goal is to enhance the intelligence of humans, while the investor is looking for big bucks for finding a cure for Alzheimer’s. A smorgasbord of men and women is there for the eating by the giant sharks in both films, and their offspring in the second one. In Deep Blue Sea the giant sharks hunt their victims through the corridors of the facility, while the offspring do most of the stalking in the sequel/remake. Body counts in both movies are high.

Indeed it does. Deep Blue Sea offered a solid cast that included Samuel L. Jackson (a personal favorite), Thomas Jane, Stellan Skarsgård, even LL Cool J. The cast of Deep Blue Sea 2 featured nobody I ever heard of, and it showed.

Two of those nobody-I-ever-heard-ofs really brought the film down for me. Their character names were Leslie and Daniel, a young newlywed couple, both neurobiologists. They spent the first part of the film joined at the hip (literally) nearly the whole time, and later, when the shark babies stalked the flooded corridors and the pair became separated, they just kept shouting each other’s name as they shlepped through the water. I thought it merciful (for viewers) when the babies chowed down on Leslie as a horrified Daniel watched through a window in a hatch. The forlorn guy would later be bitten in half by one of the mama sharks. 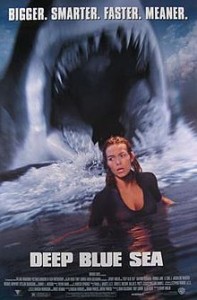 Speaking of those baby sharks (no, I won’t offer a link to that song here), their appearances provided a few unintentional laughs. They resembled oversized piranhas on steroids as they leaped out of the water like mullets. Nothing like a little comic relief is such a bloody film.

Yes, even I, the master of “Easily Entertained,” has his limits. But what the heck, Deep Blue Sea 2 is a shark movie, so it can’t be all bad. And believe it or not, someone must’ve thought enough of it to make Deep Blue Sea 3, another direct-to-video entry. Definitely a sequel, this one got much better reviews than its predecessor. However…

Let’s save that for another time.