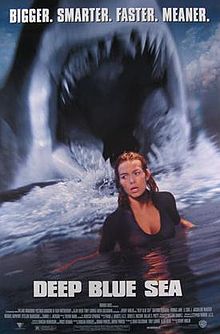 My dear bride is not into my kind of bad movies, so I usually watch them when she’s out. When she’s home, we watch mutually agreeable flicks. But this week she had work to do on her trusty laptop that required concentration, and she thus spake the words that I love to hear: “Watch whatever you want, but put the headphones on.”

The film, which made a shark-load of money, offers a serviceable cast: Thomas Jane, Stellan Skarsgård, LL Cool J, Samuel L. Jackson (does it seem like he’s played in almost every movie ever made since the 1980s?), and the main character, a British actress with the awesome name of Saffron Burrows. The story opens when four party animals on a boat are menaced by a huge shark. They all survive when a shark wrangler named Carter (Jane) shows up and blows it away.

Fast forward to a researcher named Susan (Burrows) trying to squeeze more funding for a project out of rich guy Franklin (Jackson), who has already thrown millions into it. Susan’s dad suffered and died from Alzheimer’s, and she’ll do anything (seriously) to develop a cure. She schleps Franklin to Aquatica, an isolated research facility far out at sea to show him the progress she and her team have made. If an upcoming test is successful, think of the gazillions Franklin’s company will make.

So what has Susan been doing? Seems she has discovered an enzyme in a shark’s brain that could cure Alzheimer’s. The thing is, a shark’s brain is rather small, so Susan has bypassed all ethics and protocol to genetically enlarge it—at the same time enlarging the beasties themselves, not to mention their brainpower. So what we have swimming around Aquatica are three smart sharks, each one the size of a Klingon Bird of Prey. A recipe for disaster? Ya think? 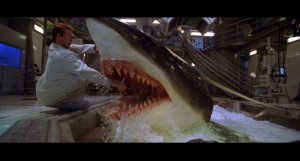 A scientist lends a hand (and arm) to a shark.

Carter manages to anesthetize one of the sharks, and Susan extracts the enzyme. The test proves successful, and the scientists celebrate as Franklin sees dollar signs dancing in his head. But alas, one of the scientists, Whitlock (Skarsgård), gets too close to the shark, which bites off his arm before sinking back into the depths.

The shit has hit the fan, and it only gets worse. As a rescue helicopter tries to lift the dismembered guy up (in a violent storm, no less), it is yanked down by a shark, where it crashes and burns, destroying the upper part of Aquatica. All of the others are in the third level below the surface, and they watch in horror as the shark, in a “Payback’s a bitch!” moment, spits Whitlock at the supposedly unbreakable glass—breaking it. Water pours in, driving Susan and four others into the corridors in an effort to escape. 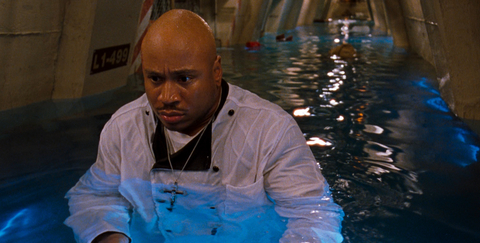 Preacher is doing some serious praying.

The only other character not with them is the cook, Preacher (LL Cool J), who has some of the best lines in the movie as he also tries to find a way out. (So does his parrot, with gems such as, “Up yours, asshole.”) He’ll hook up with whoever is left near the end.

The rest of it is somewhat predictable, with humans trying to reach the surface and the sharks—as well as countless tons of water—hounding them through various corridors and chambers. There is a body count on both sides, which I won’t get into—except for one, and I’ll issue a SPOILER ALERT before I mention it, because this scene has been rated quite high in a number of “Best Movie Deaths” lists. (Yes, they actually come out with these.) With hope ebbing, the weary group has gathered in a chamber that contains a pool leading into the containment tank or whatever. Franklin tries to rally the troops with an impassioned “Never give up, never surrender” kind of rah-rah speech. Just as everyone looks inspired, one of the sharks emerges from the pool in super-fast speed and swallows Franklin whole. Made me jump the first time I saw it!

Anyway, there are survivors—not many—and, in what I consider a refreshing surprise from what is usually the norm in these kinds of films, not who you’d expect.

A Guilty Pleasure? Oh yeah. But check out Deep Blue Sea. There are far worse ways to spend a little over an hour-and-a-half.