Myths And Legends: The Myrtles Plantation 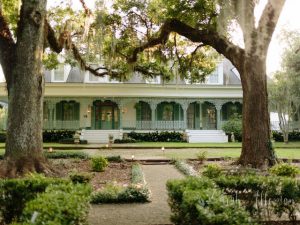 Built in 1796, the antebellum Myrtles Plantation in St. Francisville, Louisiana has a reputation as one of America’s most haunted houses. Currently a bed & breakfast, the main house is said to have been built above a Native American burial ground, and we all know what that means. One of its ghosts is a young Indian woman. And she’s not alone.

CHLOE AND THE POISONED CAKE

It is believed that ten people were murdered at Myrtles Plantation, and that at least a dozen ghosts haunt the grounds. The only confirmed murder is that of a man named William Winter, who occupied the house from 1865-1871. After being shot outside the house by a stranger he went back in, staggered up the staircase, and died on step #17. Reports of his footsteps on the stairs continue to this day.

Earlier, a slave named Chloe belonged to Clark and Sara Woodruff, the owners at that time. Legend has it that Clark forced Chloe to be his mistress, and one day, when Clark thought Chloe had been snooping around as he made a business deal, he had one of her ears cut off. Chloe wore a green turban to hide the damage. 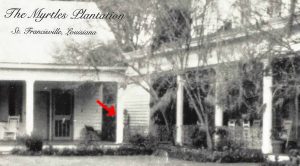 Does the spirit of Chloe still haunt the mansion?

Seeking revenge on her master, Chloe baked a cake and poisoned it with oleander. Clark never got to taste the cake, but Sara and their two daughters did, and they died. Fearing retribution, the plantation’s other slaves hung Chloe and threw her body into the Mississippi River.

Many believe that story was pure fiction. But others have reported that a Black woman wearing a green turban still haunts Myrtles Plantation, and that the spirits of Sara Woodruff and her children remain trapped in a large mirror, where they leave handprints as they beg for release.

The main house was ransacked by Union soldiers during the Civil War, and according to legend, at least three of them were killed there. A bloodstain approximately the size and shape of a human body still remains in a doorway, and anyone attempting to clean the stain is repelled. 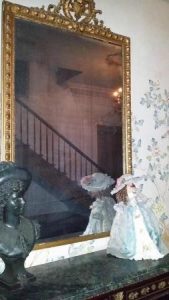 Are the spirits of Sara Woodruff and her children still trapped in this mirror?

A few years after the Civil War a young woman who had been staying at the house died in her room after seeking the ministrations of a local voodoo practitioner. Her ghost is often seen in this room, and legend tells us that she tries to practice voodoo on anyone staying there. Nope, not on my travel itinerary.

Myrtles Plantation appeared on an episode of Unsolved Mysteries in 2001. The show’s host, Robert Stack (yeah, Eliot Ness), reported all manner of technical difficulties during production. Since then, an episode of Ghost Hunters also featured the plantation. Ditto the two TV series Ghost Adventures and Most Terrifying Places in America.

Maybe it’s all a bunch of hokum, or perhaps some of it is founded in fact. (As the Ghostbusters once said, “We want to believe you.”) Whatever the case, the Myrtles Plantation in Louisiana remains a popular tourist attraction. Check out the website for more information.