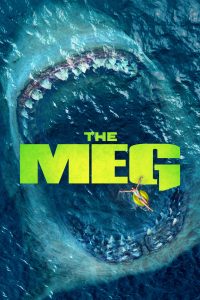 Okay, just to clarify, The Meg is a borderline Guilty Pleasure by virtue of its so-so reviews (one reviewer said, “…neither good enough, nor bad enough”), though it did do well at the box office, and a sequel is planned. Whatever; I would’ve enjoyed this creature feature no matter what.

PLEASED TO EAT YOU

With that tagline (one of many), here is a brief overview of the film. First off, “Meg” is short for Megalodon, a prehistoric shark about the size of Montana. Five years earlier it had attacked an underwater rescue vehicle piloted by Jonas Taylor (Jason Statham) as he tried to save the crew of a damaged submarine. Two of his men died, and Jonas was blamed for their deaths, even though he saved many others. His story about a gigantic creature attacking them and screwing up the rescue attempt just didn’t wash. 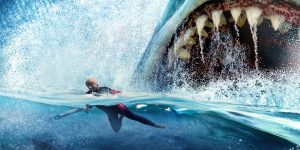 Taylor takes an ill-advised swim with the Meg.

In the present, the “retired” Taylor is living a beer-sotted life in Thailand when he is recruited to rescue the three-person crew of a research submersible that has been attacked by another Meg deep below a hydrogen sulfide layer in the Marianas Trench. He initially refuses, until he learns that the submersible’s pilot is his ex-wife, so off he goes.

Taylor manages to save his ex-wife and one of the researchers, though only because the other researcher sacrifices himself by luring the Meg away from Taylor’s submersible. Unfortunately, their passage through the hydrogen sulfide layer leaves a temporary opening, through which the huge beastie follows them up to their mostly underwater research facility. After scaring the crap out of everyone there it sets off for the mainland, intent on generating a whole lot of death, destruction, and damage. All that stands in its way is Taylor and his highly motivated crew. But can they perform the impossible? 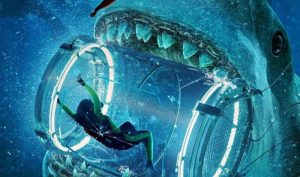 Trying to tranquilize the Meg from a shark cage…bad idea.

I’ll stop here. Suffice to say, there has been plenty of action up till this point, and it only increases exponentially. Believable? Well, hardly…but hey, this is escape fiction, and isn’t this why we watch action movies in the first place? The Meg—which, as I mentioned, will have a sequel coming out in a year or two—does not disappoint. 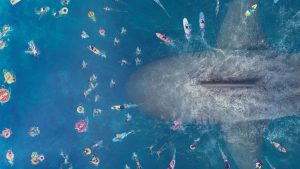 A movable feast for the beastie…