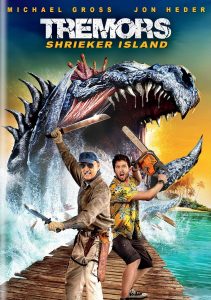 That title is a double entendre, don’t you know? In the first place, the giant worm-things known as graboids are back on the small screen in Tremors: Shrieker Island (2020), the seventh film in the long-running Tremors franchise. And second, when a graboid dies a really gross creature called a shrieker emerges from its carcass to carry on the lineage. But, of course, you knew that.

“ANOTHER DAY IN PARADISE”

With that tagline, here is a brief overview of this creature feature. A mega-rich asshole named Bill (few characters have last names in the film) owns a successful biotech company with a research facility on the coast of Thailand. This great white hunter keeps a game preserve just offshore on Dark Island, where he leads hunting expeditions for other mega-rich assholes. At present the “game” is a genetically enhanced graboid, which his scientists have made bigger and smarter. There are four on the island, led by one they dub the Queen, who is, according to one character “the size of Godzilla.”

After their first foray does not go well, Bill and his group return to base camp on the mainland. Researchers Jasmine and Jimmy (Jon Heder; yeah, Napoleon Dynamite), wondering what their boss is up to, head over to the island with one of their assistants. They find a dead graboid, its carcass burst open, and Jasmine knows what that means. It just so happens that she is Burt Gummer’s long-ago one-night stand and the mother of their son, Travis Welker. As they tear ass back to their boat, the assistant is killed by a shrieker. 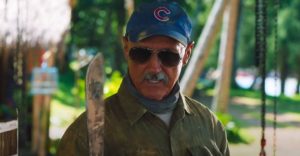 Burt is always up for the challenge, whatever the weaponry.

Jasmine sends Jimmy to find Burt Gummer (Michael Gross, who has been in all of the Tremors films as well as the thirteen-episode television series), now living a survivalist life in New Guinea. Burt initially turns them down, but as always his graboid-hating blood begins to boil, especially when he learns that they’ve been genetically enhanced. When he dons his beat-up Chicago Cubs cap, you know he means to kick some graboid and shrieker ass.

By this time the graboids, and the equally enhanced shriekers—their cries have the ability to kill—have reduced Bill’s hunting party considerably, rendering the great white hunter nearly psychotic in his desire to kill the beasties. Ultimately he’ll prove as much a challenge to Burt and his team as the creatures. 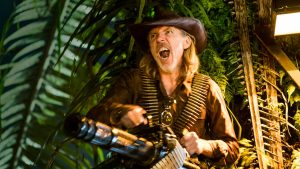 Great White Hunter Bill has gone off the deep end.

So can the great Burt Gummer and his motley team of biotech researchers pull this off? With their only weapons being what they find in an old World War II bunker? Quite a challenge…but you know Burt.

Okay, I’ll stop here. Just like its predecessors, Tremors: Shrieker Island is not what you’d call classic cinema, but who cares? It is a fun, exciting creature feature that fits nicely into graboid lore, and Michael Gross always appears to have tons of fun in his signature role. I’m glad the filmmakers keep churning them out. 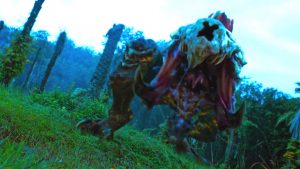 The genetically enhanced shriekers are bigger and meaner.