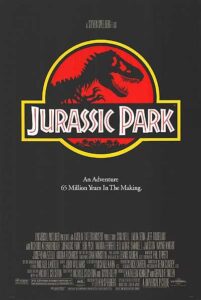 Paleobotanist Ellie Sattler (Laura Dern) uttered that awesome comeback line in Jurassic Park (1993). I’ll give you the full context shortly. There are a lot of great lines in what I consider the best of all the films in the Jurassic DinoVerse (my word). Here are a few more.

Hammond says, “All major theme parks have delays. When they opened Disneyland in 1956, nothing worked!” To which Malcolm replies, “Yeah, but John, if the ‘Pirates of the Caribbean’ breaks down, the pirates don’t eat the tourists.” “That is one big pile of shit.”

Continuing to be unimpressed, Malcolm lets loose this diatribe: “I’ll tell you the problem with the scientific power that you’re using here: it didn’t require any discipline to attain it. You read what others had done and you took the next step. You didn’t earn the knowledge for yourselves, so you don’t take any responsibility for it. You stood on the shoulders of geniuses to accomplish something as fast as you could, and before you even knew what you had you patented it, and packaged it, and slapped it on a plastic lunchbox, and now you’re selling it…” (Later on he rightly says, “Boy, do I hate being right all the time.”)

Gennaro, the lawyer representing Hammond’s investors, has gotten on board with the project, but Sattler and Grant are treading cautiously. The frustrated Hammond says, “I don’t believe it! You’re meant to come down here and defend me against these characters, and the only one I’ve got on my side is the bloodsucking lawyer!” 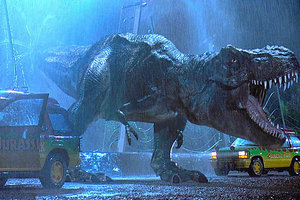 The T-Rex did not want to join the tour.

On a tour of the park, which up till now has not been successful, all of the participants abandon the touring cars to witness a sick triceratops being treated. Malcolm observes an enormous mound of dinosaur droppings: “That is one big pile of shit.”

The tour has fallen apart after a disgruntled computer programmer sabotages the system. A T-Rex has killed Gennaro and injured Malcolm. Sattler and game warden Robert Muldoon rescue Malcolm and speed off with the T-Rex in pursuit of their jeep as Malcolm opines, “Do you think they’ll have that on the tour?”

Hammond had informed everyone that the dinosaurs could not breed in the wild, because they were all females. But Grant, who had escaped the T-Rex with Hammond’s grandkids, Lex and Tim, is shocked at this discovery: “Oh my God, do you know what this is? This is a dinosaur egg. The dinosaurs are breeding!” (Well, Malcolm had said, “Life will find a way.”)

Jeff Goldblum, as Ian Malcolm, clearly has many of the film’s best lines. Early on Hammond had warned the others, “You’ll have to get used to Dr. Malcolm, he suffers from a deplorable excess of personality, especially for a mathematician.” 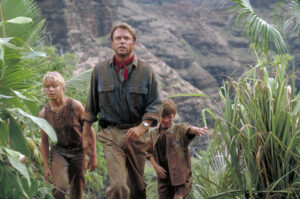 As the survivors of the disaster in Jurassic Park make their final escape, Alan Grant sarcastically says, “Hammond, after careful consideration I’ve decided not to endorse your park.” To which Hammond replies, “So have I.”

Jeff Goldblum’s character becomes the star in the second film, The Lost World: Jurassic Park, so you just know there are plenty of snappy one-liners. Maybe we’ll explore that in a future post.