Blowing Shit Up: The Final (I Hope) Rambo Film 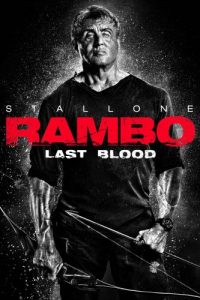 They titled the 2019 film Rambo: Last Blood, an obvious reference to the initial 1982 version, First Blood. I loved that film, based on the 1972 novel by David Morrell, and I was fine with the three sequels, the last of them in 2008, simply titled Rambo. Sylvester Stallone, who starred as the titular character in all of the films, was already long in tooth back then, so when he returned to the U.S. at the end of the movie and walked up the road to his father’s Arizona horse ranch, you had to figure that the franchise had finally run its course. Wrong-o!

Now I could’ve written about Rambo: Last Blood as a Guilty Pleasure, given its weak box office and awful reviews. But first off, it was hardly much of a pleasure to watch, and second, the earlier films all qualified for this particular series. (See my post: “Blowing Shit Up: The Rambo Films.”) And for sure, a lot of shit blows up in this film…though it takes a bit longer to get to the fireworks.

EVEN LONGER IN TOOTH 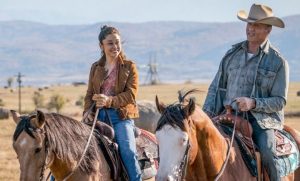 One last peaceful ride before all hell breaks loose.

Stallone keeps himself in excellent shape, but this time around his age was evident. (He’s seventy-three, same as yours truly.) In Rambo: Last Blood he’s living on his late father’s ranch with old friend/housekeeper Maria Beltran and her granddaughter, Gabriela. For Rambo, this is his only family. They are quite close.

Against Rambo’s wishes, Gabriela drives into Mexico to confront her father, who had walked out on the family years earlier. The asshole blows her off, and the disappointed girl is taken to a seedy club by her friend Gizelle, where she is drugged and kidnapped by a cartel that deals in sex trafficking.

When Gabriela does not return home the next day, as promised, Rambo drives down to Mexico and manages to find where they have taken her. Unarmed, he confronts the cartel, led by brothers Hugo and Victor Martinez. His actions seem kind of dumb, given that he’s unarmed, but whatever. They beat the crap out of him and take his wallet to learn where he lives. They also find a picture of Gabriela and swear that she will pay for his interference.

An unarmed Rambo faces down the cartel.

COME AND GET ME

Rambo is nursed back to health by a journalist named Carmen Delgado, who also has a grudge against the cartel. They had murdered her sister. After recovering he raids a brothel, kills a few guys, and rescues Gabriela, who by this time has been pumped full of heroin and raped multiple times. He drives her back to Arizona, but she dies before they arrive at the ranch. (That’s where the story totally lost me.)

Now enraged, Rambo reverts to Vietnam/Afghanistan/Burma mode and, after sending the grieving Maria to safety, rigs the ranch, including a series of tunnels that he had dug below the ground, with enough explosives to start a world war. He returns to Mexico well-armed and, with Carmen’s help, finds the home of Victor Martinez. He kills some bodyguards and decapitates Victor, then returns to his ranch to await the inevitable assault by Hugo and the cartel. 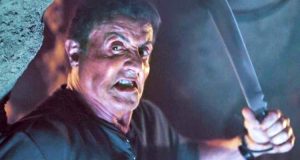 Rambo can do some nasty things with any weapon.

And yeah, they show up—at least 4,000 of them. Okay, I’m exaggerating, but there are a hell of a lot of thugs, and this is where all of the shit starts blowing up as Rambo takes them out one by one, in pairs, and in small groups of victims, saving Hugo for last. The carnage is beyond belief, even for a carnage-loving viewer like me. You won’t believe what he does to Hugo…

Anyway, I trust that Rambo: Last Blood will be the end of the line for the venerable series. Perhaps it is symbolic that, during the end credits, Rambo is seen riding his horse off into the sunset. I hope so.