Blowing Shit Up: The Rambo Films 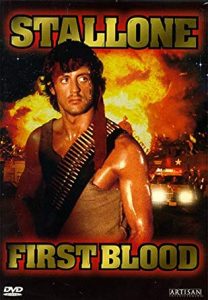 When bestselling author David Morrell wrote First Blood in 1972 I’ll bet he didn’t imagine the film series, starring Sylvester Stallone as decorated Vietnam vet John Rambo, extending into 2019. Wait, what?! They’re making a new Rambo film? That’s the word, with Stallone, who’ll be seventy-three next year, set to star, direct, and write the screenplay. Maybe Rambo will be seeking vengeance on the bad guys who stole all the walkers from his assisted living facility. But for now, let’s talk about all of the shit that blew up in the first four films.

The initial film, loosely based on the novel, is relatively quiet for a while with regard to blowing shit up. The sullen Rambo, whose service in Vietnam as part of a special ops unit earned him the Congressional Medal of Honor, among other accolades, is passing through the town of Hope, Washington and plans on stopping for a bite. But redneck sheriff Will Teasle (Brian Dennehy) wants no part of the scruffy-looking drifter in his burg, and he escorts Rambo to the town limits. When Rambo attempts to return, Teasle arrests him for vagrancy.

Now in jail, Rambo is treated harshly by Teasle’s deputies, and we see flashbacks of his time in a Viet Cong prison camp. Freaking, he beats the crap out of the deputies and escapes into the mountain wilderness. When Teasle and his men take up the pursuit, the skilled Rambo injures—but does not kill—all of them. 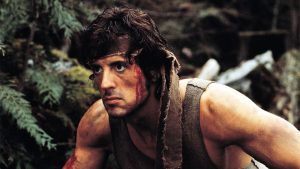 Rambo is ready for anything.

As over 200 law enforcement and National Guard personnel gather to hunt him down, Colonel Sam Trautman (Richard Crenna) arrives to warn Teasle what they’re up against. Trautman was Rambo’s CO in Vietnam and personally trained him. Teasle, obsessed with bringing Rambo down, ignores him, and the manhunt continues.

Shit begins to seriously blow up when some weekend warriors spot Rambo at the entrance of a mine and fire a rocket, which seals Rambo inside. As everyone outside celebrates, Rambo finds a way out at the other end. He hijacks a truck, drives into Hope and blows the living shit out of the town before Trautman talks him down, saves Teasle, and leads Rambo out in handcuffs. (Rambo and Teasle both die at the end of the novel, but Hollywood always smells sequels.) 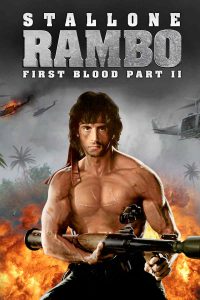 Rambo is doing hard time in prison when Trautman bails him out with the promise of a presidential pardon if he performs a service: go back into Vietnam to see if any POWs are still in a notorious Viet Cong prison. The mission is coordinated by asshole Marshall Murdock, a corrupt government official who does not want any POWs found so that the U.S. won’t have to pay reparations for their return.

Naturally, Rambo and his Vietnamese guide, a woman named Co Bao, spot POWs in the camp. They manage to spring one and head for their helicopter pickup as the Viet Cong take up the pursuit and shit starts blowing up all over the jungle. Murdock orders the chopper to abandon them, and once again Rambo is imprisoned and tortured—not only by the Viet Cong but also by their Russian advisors.

Co Bao helps him escape, but in their flight she is killed. Rambo now wages a one-man war on the Viet Cong and the Russians, and shit blows up like crazy as he destroys the prison camp and springs the POWs. He loads them on a stolen helicopter and faces off with the Russian leader on another chopper, and the carnage continues.

After taking out half the Vietnamese jungle and all of its bad guys he returns with the former POWs to the base in Thailand, where he goes looking for Murdock. All I’ll say is, a hell of a lot more shit blows up before Trautman can get Rambo under control. 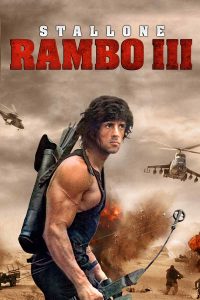 I can honestly say that more shit blows up in this one than in any of the other films, practically from beginning to end. Rambo, remaining in Thailand, has managed to find some peace living at a monastery with a group of Buddhist monks. Trautman shows up and asks him to aid in supplying weapons to the freedom fighters in Afghanistan, which has been invaded by the Soviet Union. Rambo refuses, but later on, when he learns that Trautman has been captured, he can’t get there fast enough.

Joining a large group of freedom fighters, Rambo sees what they’re up against when Soviet helicopters attack the camp and blow the shit out of it. He then makes his first attempt to rescue Trautman, who is being held at a remote fort. Tons of shit blows up, but he fails to get Trautman out. A second attempt is successful amid more shit blowing up, but eventually the Russians catch up to them with tanks and helicopters. That’s when a huge force of freedom fighters on horseback appear, and the ensuing battle is a Blowing-Shit-Up-Fest, with the good guys prevailing.

Yes, it took twenty years for the next film to appear. A longer-in-tooth Rambo is still in Thailand, living in a small village near the border of Burma (Myanmar), which is under violent military rule. A group of missionaries seeking to provide humanitarian aid to the poor villagers hires Rambo to take them downriver on his boat. Shit blows up when pirates attack and Rambo takes all of them out. He drops the missionaries off and returns to his village. 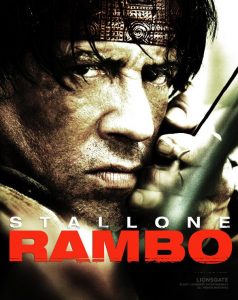 Naturally, the missionaries are captured and tortured by the bad guys. Rambo is tasked with taking a bunch of bad-ass mercenaries, hired by the church, back into Burma. He follows them into the jungle, of course, and saves some of their butts with a bow and arrow. At this point they’re trying not to alert other bad guys to their presence, so not much shit is blowing up.

They save what remains of the missionaries…quietly, at first, until the bad guys get wind of them and take up the pursuit. Another Blowing-Shit-Up-Fest ensues, culminating with the detonation of a Claymore mine that takes out half the country. The Burmese soldiers are effectively defeated, save for their brutal leader—whom Rambo quietly disembowels with a survival knife the size of Excalibur.

As I said, according to Stallone this is supposed to happen, release date Fall 2019. And no, it won’t take place in Rambo’s assisted living facility. Apparently, our hero will be taking on a Mexican drug cartel in order to save a friend’s daughter. If it flies, great. One thing we can be sure of: they’ll be Blowing Shit Up!