“What Are You, Like, 80?” Lines From The Indiana Jones Films, Part Three 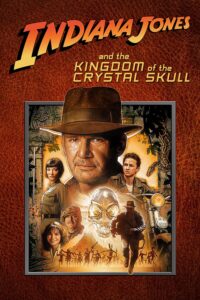 Actually, Harrison Ford will be 80+ when the fifth Indiana Jones film premieres next year. He was only in his mid-60s when he starred in Indiana Jones and the Kingdom of the Crystal Skull, the fourth film in the series, which followed a nineteen-year hiatus. Naturally, some “age” jokes were inevitable.

INDIANA JONES AND THE KINGDOM OF THE CRYSTAL SKULL (2008)

In 1957, after Indy is suspended from his teaching gig he is approached by Mutt Williams (Marion Ravenwood’s son, and his, though he doesn’t know this yet), who says that Indy’s old colleague, Harold Oxley, was kidnapped in Peru after finding a crystal skull. The Russians are also after the object, which could be alien in origin.

Indy and Mutt get the better of two Russian thugs, which prompts Mutt to say, “You know, for an old man you ain’t bad in a fight.” After Indy thanks him, Mutt asks, “What are you, like, 80?”

Indy and Spalko face off.

The leader of the Russian force, Col. Irina Spalko (Cate Blanchett), thinks the crystal skull will lead to world domination by the Soviets and offers this scary monologue: “Imagine. To peer across the world and know your enemy’s secrets. To place our thoughts into the minds of your leaders. Make your teachers teach the true version of history, your soldiers attack on our command. We’ll be everywhere at once, more powerful than a whisper, invading your dreams, thinking your thoughts for you while you sleep. We will change you, Dr. Jones, all of you, from the inside. We will turn you into us. And the best part? You won’t even know it’s happening.” 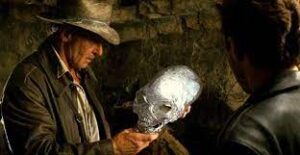 Indy is in awe of the crystal skull.

Indy asks Spalko, “You’re not from around here, are you?” Spalko says, “Where is it you would imagine I am from, Dr. Jones?” His answer: “Well, the way you’re sinking your teeth into those wubble-u’s, I should think maybe Eastern Ukraine.”

In Peru, Mutt is curious that Indy spoke to some natives in the Quechan dialect and asks when he learned it. Indy says, “I rode with Pancho Villa. A couple of his guys spoke it.” Mutt’s reply: “Bullshit!” Indy says, “You asked.”

Mutt is jumping around with scorpions all over him. Indy is not concerned: “Dance on your own time, will you?”

When Indy refuses to help Spalko, she hits one of his pressure points and has one of her men produce another prisoner: Marion Ravenwood (Karen Allen). The feisty woman’s first line: “Get your hands off me, you rotten Russki son of a bitch!” 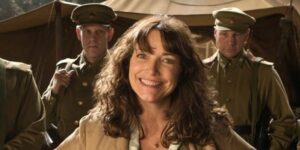 Marion is not thrilled to see Indy: “You still leaving a trail of human wreckage, or have you retired?” He says, “Why? You looking for a date?” Her reply: “With anybody but you!”

Indy and friends finally reach the ancient city of Akator, where they find 13 alien skeletons, one of them missing its head. These dimensional beings come to life when the crystal skull is returned to the latter and seek to offer some of their knowledge telepathically. The relentless Spalko shows up and demands, “I want to know!” over and over, and the aliens oblige. The overload into her brain kills the woman.

Despite some naysayers—this included a Razzie Award—Indiana Jones and the Kingdom of the Crystal Skull did well at the box office, and with many critics. I hope that Indiana Jones 5 will be just as well received.