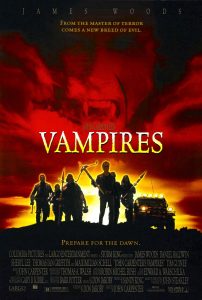 I could easily have presented the 1998 horror flick, Vampires (aka John Carpenter’s Vampires) as a Guilty Pleasure, since it met all of my parameters. (A D+ rating by audiences, no less!) But I gave it a pass because it was filmed in New Mexico, one of my favorite places, and the film’s scenery was totally cool. Apparently the bloodsuckers liked it too.

PREPARE FOR THE DAWN

With that tagline (one of many), here is a brief overview. A Vatican-funded team of vampire hunters, led by Jack Crow (James Woods) and his lieutenant, Tony Montoya (Daniel Baldwin), destroy a nest of “goons” (worker bee vampires) by impaling them and dragging them out into the sunshine, where there burst into flames and die. Crow is pissed because he did not find the master vampire, Jan Valek. As the crew drives off just after sunset, Valek pops out of the ground and is not too thrilled to find his nest destroyed. He and the others had been searching the Southwest for a holy relic, an ancient cross. 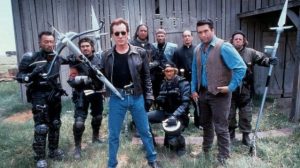 Crow and his team prepare to attack the nest.

As the crew parties with some hookers at a shithole motel, Valek shows up and kills just about everyone (seriously gross scene). He turns a hooker named Katrina, and he allows Crow to live because he believes that Crow’s connection with the Church will lead to his finding the relic, known as the Black Cross. Montoya escapes the carnage, along with Crow and Katrina.

Crow believes that Katrina, having been turned, will provide them with a psychic link to Valek. He orders Montoya to take her to a hotel and wait there until he speaks to his Vatican contact, Cardinal Alba. While holed up, Montoya falls for Katrina. When he tells her what Valek did, the horrified woman tries to kill herself. Montoya stops her but is bitten in the process. Uh-oh, we know what that means… 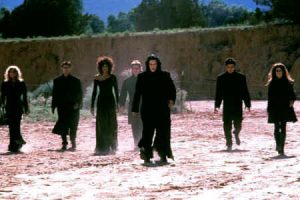 Valek leads the other master vampires.

Cardinal Alba tells Crow that Valek was a disgraced priest who, hundreds of years ago, was killed by the Church during a botched exorcism that turned him into the first vampire. Valek needs the Black Cross to complete the ritual and enable him to walk in the daylight, making him invincible. Alba wants Crow to form a new team, but the driven Crow (his father was turned, and Crow destroyed him after he killed his mother) says that he’ll do it himself. The cardinal gives in but insists that Crow take a young priest, Father Guiteau, along with him.

Crow rejoins Montoya as Katrina’s psychic link grows stronger. Through her, they learn that Valek has found the Black Cross at an obscure church, where he and a few masters that he picked up along the way have killed the head priest and a bunch of monks. (Major gross scene!) They’ve now taken over a small town, so off they go to confront Valek, his team of masters, and most of the townsfolk, who have been turned into goons. (A vampire slayer, a hooker, and a priest walk into a bar… Sorry.) Bad odds, don’t you think? 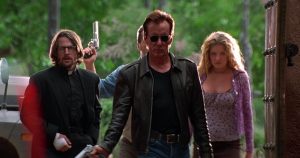 Crow and his small team have a daunting job ahead of them.

I’ll stop here. Plenty more to come, with shocking secrets revealed, more gross scenes that transcend both “seriously” and “major,” and an ending that, of course, shouted “sequel.” (Two direct-to-video sequels were made; I passed on them.) Vampires was far from the great John Carpenter’s best film, but if you’re into horror flicks it was watchable—and then there was that awesome New Mexico scenery…