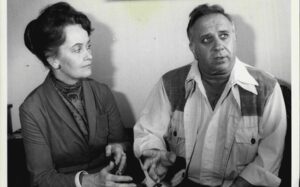 Back in 2019 I wrote about the seven films (at the time) that comprised what is called The Conjuring Universe. This is a multi-billion (with a “b”) franchise of horror movies “based on the true stories” of hauntings and demonic possession cases involving Lorraine and Ed Warren. Since then an eighth film, The Conjuring: The Devil Made Me Do It (2021) has been released, and there is more to come. I’ll talk about that film shortly, but first a refresher on the Warrens.

THE DEMONOLOGIST AND THE PSYCHIC

As mentioned, the stories are all “inspired by true events,” specifically from the case files of paranormal investigators Lorraine and Ed Warren. Ed, who passed away in 2006, called himself a demonologist. Lorraine, who died in 2019, was a psychic and medium. Together they claimed to have investigated thousands of hauntings and demonic possessions, most notably the Amityville house on Long Island (1976) and the Enfield poltergeist in England (1977). Skepticism about their work abounded all through their lives, especially regarding Amityville, which many debunked as a huge hoax. Still, that house created its own universe of seventeen films.

The 1981 true story that formed the basis for this film took place in Connecticut and involved the Glatzel family, as well as a young man named Arne Johnson, boyfriend of Debbie Glatzel. After moving into a rental home Debbie’s 11-year-old brother, David, was said to have been possessed by a demon, the latter creating much paranormal activity in the house. The Warrens were summoned, and after a number of exorcisms the demon left David’s body and apparently settled in Arne Johnson, who had been assisting with the rituals and urged the entity to take him.

Debbie worked as a dog groomer for a man named Alan Bono (Bruno Sauls in the film), and Arne did odd jobs for him. Arne had been showing some of the same odd behavior as David, and it culminated with him killing the intoxicated Bono (Sauls) by stabbing him over twenty times. Arne was arrested and charged with murder. 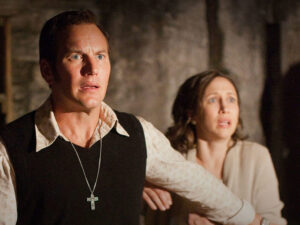 In the film, the Warrens (Vera Farmiga and Patrick Wilson, reprising their roles) begin their own investigation into what initially led to David’s possession, which involved a satanic cult and other seriously weird stuff. They also supported the assertion by Arne Johnson that he was not in control of himself when he killed Sauls, that the devil made him do it. This also happened for real, and it came to be known as the “Devil Made Me Do It” case, the first court case in U.S. history where the defense sought to prove Arne’s innocence based upon his claim of demonic possession. As you can imagine, the trial became known around the world and set off a media circus.

The events in the film regarding the Warrens’ investigation became fairly standard horror movie fare, with some predictable scares, though at times it did creep me out. The critics were kind of meh—not bad, not great. 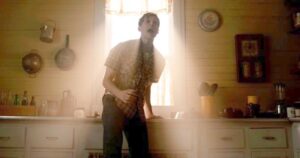 Arne Johnson (Ruairi O’Connor) is tormented by the demon.

Regarding the real trial, all that the film addressed was noted at the end. The judge rejected the demonic possession defense due to lack of evidence. In response Arne’s lawyers stated that Arne acted in self-defense. The jury, though not legally allowed to consider demonic possession, had to have been influenced from all that they had heard. They deliberated for three days, finally issuing a guilty verdict of first-degree manslaughter. Arne Johnson was sentenced to 10-20 years but served only five. He and Debbie were married, and they still live in Connecticut.

The Conjuring: The Devil Made Me Do It added $200+ million to the franchise’s coffers. And yes, there is more to come. A sequel to The Nun (2018) has just begun filming, and a story about the Crooked Man, a terrifying entity in The Conjuring 2 (2016), though delayed, is still in the works. The Conjuring Universe is not going away anytime soon—which makes this fan quite happy.