Throwback Thursday: Who Is The Real Monster?

This post, about a gripping film that depicts both a real and a metaphorical MONSTER, first ran in 2017. 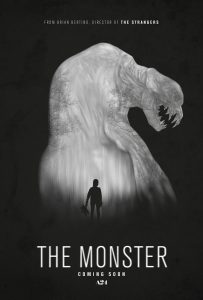 Yes, there is an actual monster in the gripping 2016 horror film, The Monster, the kind you once thought hid under your bed, or in your closet. But there is also a metaphorical monster in the person of Kathy, a Mother From Hell to ten-year-old Lizzy, who can’t wait to have her mom out of her life for good.

STAY IN THE LIGHT

With that tagline, the story opens as Lizzy (Ella Ballentine) cleans up after her mother, Kathy (Zoe Kazan), who has passed out in bed, as usual. Liquor bottles, beer cans, and ash trays full of cigarette butts are all over the house. Kathy is supposed to drive her daughter to her ex-husband’s house for his turn at custody. They are late, so Lizzy manages to awaken her mother, and they finally leave.

A series of key flashbacks throughout the film illustrate the nightmare relationship between the verbally and physically abusive, alcoholic Kathy and the otherwise sweet Lizzy. Imagine a child not wanting her mother to show up at her school play, a scene that results in the pair shouting “Fuck you!” at each other repeatedly. In one scene we also see Lizzy’s dad, who is not much better than Kathy, but enough that she’d rather go and live with him.

Lizzy’s dad, naturally, lives a gazillion miles away in the boonies. At a convenience store pit stop, Kathy shows the first sign of regret over their relationship by giving Lizzy her grandmother’s watch. It is implied that Kathy realizes her daughter will be better off living with the ex-husband. 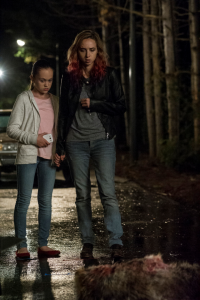 Lizzy and her mother don’t like what they’re seeing on the lonely road.

Late at night, driving along a deserted road through the woods in threatening weather, Kathy hits a wolf with the car. She is injured, the car damaged. Lizzy calls for an ambulance and a tow truck. While waiting, they approach the wolf and notice that its injuries appear to be from an attack by another animal, rather than the car hitting it. Whoa, back to the car!

The tow truck arrives first and Jesse, the driver, goes under the car to assess the damage. Lizzy notices that the wolf’s body is no longer there. She finds it in the woods just off the road, and as she stares at the now chewed up body we see a dark figure moving behind her. Back to the car again!

Suddenly, they no longer hear Jesse working. Kathy leaves the car and sees that he has disappeared. His severed arm is then tossed on the hood of the car, which freaks Lizzy out no end. Kathy, attempting to calm her terrified daughter, shows the first signs of a loving, protective mother. They both watch as an armless Jesse appears and attempts to get into his truck. The monster, now visible to them, pulls Jesse down and kills him. 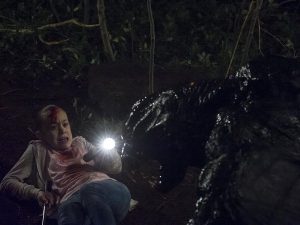 Lizzy has a big problem…

The monster now approaches their car and tries to pull Kathy out. An ambulance shows up, and its lights drive the monster back into the woods. Two EMTs move Lizzy and Kathy to their vehicle, but before they can leave, the monster attacks and kills the EMT team. Kathy, protecting her daughter, shines a flashlight into its (rather gross) face and scares it off. Despite her injuries, she gets behind the wheel of the ambulance and drives off. But the monster slams into the vehicle, sending it off the road and onto its side. Kathy is injured even more severely.

No spoiler alert…I don’t want to give away what follows. We’ve already seen a change in the relationship between the Mother From Hell and her abused daughter. What will happen now, when their very lives are at stake?

Despite its solid reviews, and the excellent performances by Kazan and young Ballentine, few people saw The Monster, which first came out on DirecTV Cinema before a limited theatrical run. (Real limited.) I hope it enjoys greater success on DVD, which it deserves.