Throwback Thursday: The Man Of A Thousand Screen Roles 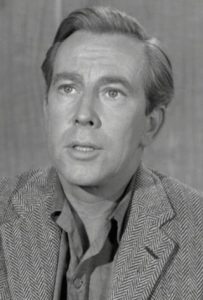 Before Samuel L. Jackson began acting in seemingly every movie made since the 1980s, there was Whit Bissell. This post first ran in 2017.

In one of my books from decades past I wrote about a late Hollywood character actor named Whit Bissell and said that he had played in every movie ever made. Okay, I was kidding, just as I am with the title of this post. But in reality Bissell played many hundreds of roles in movies and television from the early 1940s until he hung up his acting shoes in the mid-’80s, quite a few of them in films that I count among my favorites.

Whitner Nutting Bissell was born in New York City in 1909. He hit the stage during his college days at the University of North Carolina in Chapel Hill as part of a theater group associated with UNC. After some time on the Broadway stage he came to California around 1940 and began landing bit roles in a number of films, many of them uncredited. Possessing an air of authority (“fussy officiousness,” someone once called it), Bissell was regularly cast to play doctors, military officers, scientists (mad and otherwise), politicians, and judges.

Dr. Hill (r) listens to a frantic Miles Bennell in Invasion of the Body Snatchers.

Bissell made his mark (and became memorable to me) in the 1950s, a golden era for “B” movies, especially in science fiction and horror. It began in 1954 with the role of Dr. Edwin Thompson in the classic monster flick, Creature from the Black Lagoon. (The Gill Man was a guy in a rubber suit, but he scared the crap out of me.) Bissell’s character is guarding the creature when it escapes and messes up his face. He manages to drive it off but spends the rest of the film with his face covered by bandages.

Two years later, after a load of film and television roles, Bissell had a small but pivotal role in the awesome Invasion of the Body Snatchers (if you read this blog you know how I feel about that film). He appears (uncredited) in the “framing sequence” as Dr. Hill, a psychiatrist who listens to alleged nut job Miles Bennell’s story about humans being turned into pod people, and ultimately believes him. 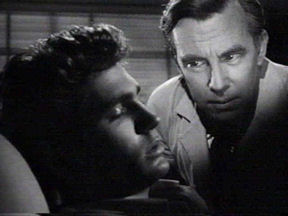 Dr. Brandon watches Michael Landon transform in I Was a Teenage Werewolf.

One year later, in 1957—again, after many other small roles—Bissell had more screen time as whacko scientist Dr. Alfred Brandon in, I Was a Teenage Werewolf, starring Michael Landon (yeah, Little Joe from Bonanza) as the lycanthrope. Made for about $6.43 (okay, $100k), the film made a couple million and was considered a box office smash.

Given this success, I Was a Teenage Frankenstein debuted later that same year. This time Whit Bissell got the starring role as Prof. Frankenstein. Though not as well received, the film has a memorable line spoken by Bissell’s character to the monster: “Answer me. You have a civil tongue in your head! I know—I sewed it in there!” 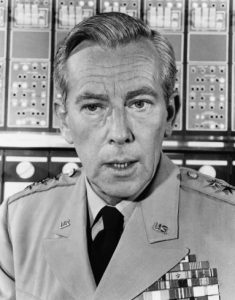 Bissell had many more small roles through the rest of the ’50s, culminating with his part as an undertaker in the classic 1960 western, The Magnificent Seven. (One of his lines: “I’ve always treated every man the same, just as another future customer.”) He showed his versatility when he portrayed Dr. Joseph Goebbels, the Nazi, on GE Theater. He even played different characters on the same TV shows, including three on Bachelor Father and four on Perry Mason. To call him “ubiquitous” would be an understatement.

Bissell’s longest-running gig came as General Heywood Kirk in the TV series, The Time Tunnel. He appeared in all thirty episodes during the show’s run in 1966-67.

And speaking of “Kirk,” Bissell appeared as another authoritative figure, Mr. Lurry, in the original Star Trek series episode, The Trouble with Tribbles. This, of course, immortalized him in Trekkie lore.

By this time anyone who watched television or went to the movies was familiar with Whit Bissell, if not by name then certainly by sight. His amazing number of screen roles continued all through the 1970s. He finally retired in 1984 after his last role on the TV series, Falcon Crest. 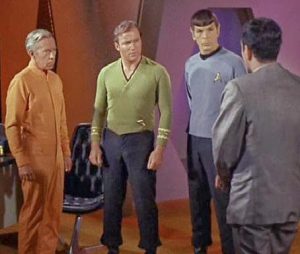 Mr. Lurry, with Kirk and Spock.

Whit Bissell passed away in 1996 from the effects of Parkinson’s disease. He was one of my favorites, my reason for wanting to share this post about his accomplishments. Maybe I was right in the first place; maybe he did appear in every movie ever made.