Long before the Great White Shark kept us out of the water, there was the Gill-Man. I first presented this post in 2017. 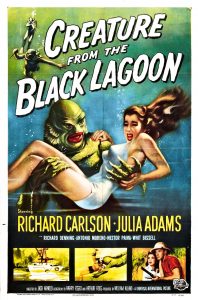 The science fiction and horror movies of the 1950s more than sufficed to scare the crap out of an impressionable kid like me. Foremost among them was the Gill-Man from the 1954 Universal-International classic, Creature from the Black Lagoon, even though most of us knew that the “piscine amphibious humanoid” was a guy in a rubber suit. (Two guys, actually—one on land, the other underwater.) The Gill-Man proved to be hugely popular, and the low-budget 3D film made a chunk of change, which meant that sequels were inevitable, even back then. That was unfortunate, as I’ll discuss shortly.

FROM THE AMAZON’S FORBIDDEN DEPTHS…

The story has Dr. Maia, a geologist, discovering a fossilized hand in an Amazon tributary at the same time that a “real” hand emerges unseen from the river. For the first time we hear the three creepy, elevating notes (da-Da-DAAA!) that accompanies every appearance by the Gill-Man in all of the movies. The geologist takes the hand to Dr. David Reed, an ichthyologist, and his assistant/girlfriend, Kay Lawrence. (A brainy woman in the 1950s…unique.) Intrigued, they put together an expedition with other scientists and head back to Maia’s camp on a tramp steamer, where they find his two guides mauled to death. Seems the Gill-Man paid them a visit. 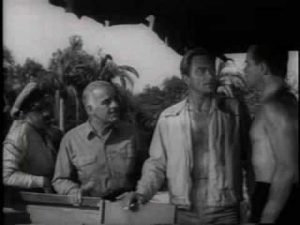 Tension grips the expedition to the Black Lagoon.

When the fossil site turns up nothing the expedition heads down the tributary to where it empties into a lagoon. Yep, this is where the Gill-Man hangs out most of the time. It stalks a couple of the scientists when they dive to look for fossils, and it gets super excited when Kay goes swimming. Looks like it hasn’t had a Gill-Woman in centuries.

Ultimately there are encounters, and some deaths—mostly expendable crew members on the boat—before they capture the Gill-Man, who promptly escapes and messes up the face of one of the scientists. Time to go, they decide; but the Gill-Man has blocked the lagoon entrance, and as they try to clear the way out, the scientist who financed the expedition goes after the creature and is killed. Kay is then abducted by the Gill-Man, who takes her to its cave. David and the others rescue Kay and shoot the shit out of the creature, who returns to the depths and is seen floating motionlessly to the bottom. End of story…well, this one, anyway. 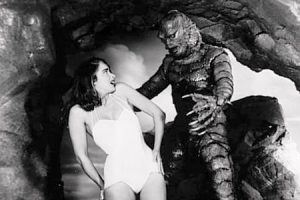 The Gill-Man is about to ruin Kay’s afternoon.

Creature from the Black Lagoon was a unique and welcome addition to the Universal-International monster-verse. It had great reviews, solid box office, and even spawned Gill-Man action figures and other merchandise. Over the years it wound up on a number of Top 100 lists. So how could they NOT make a sequel?

REVENGE OF THE CREATURE

The only 3D film released in 1955, Revenge of the Creature brought back just one character from the first movie: the captain of the tramp steamer. He takes a couple of guys to the Black Lagoon, where the Gill-Man is—gasp!—still alive. They capture it—rather easily—and take it to a marine theme park in Florida, where it is put on exhibition for all to gawk at. It will also be studied by Dr. Clete Ferguson and Helen Dobson, a graduate student writing a thesis.

This is where the series began to lose me. First, I found the exploitation of the Gill-Man by putting it on display a real turn-off. And while Clete and Helen seemed like nice people—they even fall for each other; what a surprise—their “study” of the creature included chaining it to the bottom of a pool and administering jolts of electricity with a shock stick. I found myself rooting for the Gill-Man to break free and bust a few heads.

The creature finally does escape and busts some heads, but only those dumb enough to challenge it. What it mainly wants is Helen (of course), and ultimately it snatches her from a dance club. Clete and the cops finally catch up to the Gill-Man on a beach, where it puts Helen down. It gets riddled with bullets, staggers out into the water, and (stop me if you heard this one) floats motionlessly down to the bottom. End of story…again? 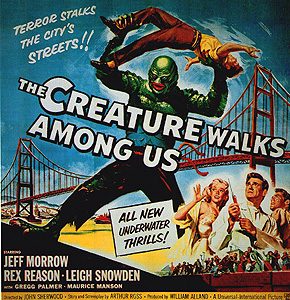 With that tagline, The Creature Walks Among Us premiered in 1956. The title itself is a misnomer, as the Gill-Man hardly does any walking in it. Seems that our monster is still alive somewhere in the Everglades, and lunatic scientist/rich guy, Dr. William Barton, with a team of other scientists (one is named Dr. Borg), plans on capturing it so that he can play Dr. Frankenstein and make it more “human.”

The middle-aged Barton is a nasty asshole who verbally and physically abuses his young, beautiful wife, Marcia. But, lest you think she’s a sympathetic character, in one early scene the scientists are below deck on Barton’s yacht when they hear gunshots from above. Seems that Marcia, bored with her life, has been shooting at porpoises but has only managed to kill two of them so far. What a creep!

So when they capture the Gill-Man by setting it on fire, I knew who I was pulling for in this story. They operate on the poor creature and, in Barton’s words, they change “…a sea creature into a land creature.” They even dress it up in pants and a shirt, for crying out loud. Oh, my poor Gill-Man! 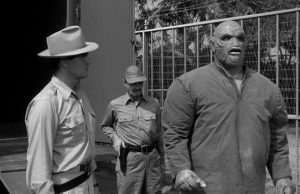 The Gill-Man: all dressed up and nowhere to go.

So from the Everglades they wind up at Barton’s sprawling ranch in Sausalito, near San Francisco, where the Gill-Man is penned up with some sheep. (I kid you not.) And here I am, hoping that the creature will take out everyone. (Not the sheep, though.) No need to go beyond this point. What a shame that the series had to end like this.

A FUTURE FOR THE GILL-MAN?

As far back as 1982 a remake of Creature from the Black Lagoon had been in development. But as is the way in Hollywood, “development” often turns into “development hell.” The idea was revived a half-dozen times or more through 2012, when a screenwriter was hired to create a new script. That also went down the tubes.

But with the ongoing popularity of the Marvel Universe and the Justice League of DC Comics, Universal Pictures has begun their own monster-verse of rebooted versions of their classic films. It began this year with The Mummy, starring Tom Cruise, and is supposed to continue with Bride of Frankenstein. Creature from the Black Lagoon already has a new script written, so hopefully the Gill-Man, that swingin’ piscine amphibious humanoid, will again be a rock star in the ’20s.