Throwback Thursday: Rancid Reviews—We Writers Just Have To Live With Them

Don’t we just love those readers who didn’t “get it” when they read our books? I first presented this post in 2016.

A rather recent rancid review prompted me to write this post. Sure, most writers are sensitive to criticism; I was like that too, back in the day. But I’ve been writing since the dawn of time and have learned to accept bad reviews as part of “the cost of doing business.” Still, rotten repulsive rancid reviews really rankle, right? 😊

My award-winning historical novel, Stone Woman: Winema and the Modocs, had garnered only praise—until recently. Then, a reviewer—apparently a Modoc descendent—went off on it, claiming it to be “historically inaccurate,” even going so far as to warn people not to read it. The key word here, of course, is NOVEL, which this individual apparently missed. While much of the background is right out of the history books, writing the story as fiction gave me the opportunity to add characters and dialogue, and to present scenes in a way that would make readers want to turn pages. I made no claim to writing a work of non-fiction here.

My (also award-winning) thriller, Freedom’s Hand, has been reviewed more than any of my other novels. For the most part they have been excellent, thoughtful reviews by readers who really “got” what I was out to accomplish in this complex story. Then, someone gave it one star on Amazon—because he took umbrage with the 60-word teaser! I had some dialogue with this individual, but he was adamant about not liking the teaser. He hadn’t even read the book. This seemed wrong, so for the first—and last—time I wrote a note to Amazon and asked them to pull it. Their response: the review fell within their proper guidelines and therefore would remain.

Another rancid review for Freedom’s Hand—the only other one—said that there wasn’t enough about World War II, and that the story was too violent. A story about a concentration camp and white supremacists too violent? And, as stated in both the teaser and the back cover copy, the story takes place fifty years after Auschwitz. What part of all this did the reader not understand?

IT’S THE INDIVIDUAL, NOT YOUR BOOK

One of my most successful writers has had far more reviews for her many novels than I have, the majority of them positive. There are crummy ones, of course, and for the most part she can deal with them.

But one person really got to her. The reviews were not just negative but hurtful and mean-spirited. Given that there were reviews on multiple books, I first wondered why this woman would keep on reading them if she hated the first one so much. That made no sense at all.

On Amazon you can read all of the reviews posted by an individual, so I thought it might be interesting to see what this person had to say about other writers’ books. Whoa, did I get an eyeful! Not only did she hate all the other books that she read, but everything else—clothing, appliances, you name it—that she purchased on Amazon. I would suggest this woman needs a serious attitude adjustment, or counseling. My writer was much relieved when I told her about this.

Some people feel empowered by writing negative reviews. Knowing that might make it easier for us to accept.

A BOOK FULL OF ROTTEN REVIEWS 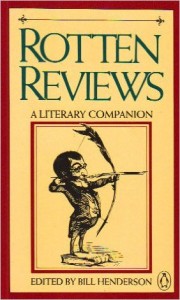 The reviews previously discussed here came from “amateur” readers—for want of a better word. How about professional reviewers? A neat little hardback from Pushcart Press titled Rotten Reviews: A Literary Companion—still available, I do believe—is a real eye-opener when it comes to the works of renowned authors. Here is just a sampling.

“We fancy that any real child might be more puzzled than enchanted by this stiff, overwrought story.” – Alice in Wonderland, by Lewis Carroll.

“Last winter I forced myself through his [novel]. It was a sheer dead pull from start to finish. It all seemed so insincere, such a transparent make-believe, a mere piece of acting.” – A Tale of Two Cities, by Charles Dickens.

“A little slack, a little soft, more than a little artificial, [this book] falls into the class of negligible novels.” – The Great Gatsby, by F. Scott Fitzgerald.

“A lugubrious and heavy-handed piece of propaganda.” – Brave New World, by Aldous Huxley.

“Recent war novels have accustomed us all to ugly words and images, but from the mouths of the very young and protected they sound peculiarly offensive…the ear refuses to believe.” – The Catcher in the Rye, by J.D. Salinger.

And on it goes. I’ve always maintained that critics of books and films are frustrated writers and actors, and guess what? I still believe it.