This is one sad spirit that I’m sure many folks wish they could help move on. The post first ran in 2019.

The accident that killed young Condie Cunningham over a century ago was no myth. But what followed would move the needle to the top of the “WEIRD” meter, where it remains to this day. 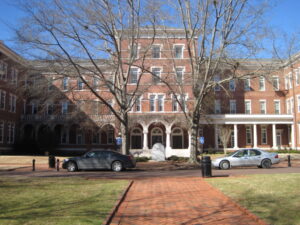 The University of Montevallo.

The University of Montevallo is a public, coeducational institution located in Montevallo, Alabama. It has a solid reputation, continually ranking high in many lists of “America’s Best Colleges.” Originally a “women only” technical college, it opened in 1896 as the Alabama Girls’ Industrial School (AGIS). It is here, in 1908, that the tragic story of Condie Cunningham begins.

Condie lived in a dorm room on the fourth floor of the main residence hall. One evening, a few other students gathered for a snack in the room shared by Condie and her roommate. They were sort of bending the school rules by doing this, but what the heck, it wasn’t the first time, and they had never been caught. As long as they kept the noise to a minimum…

The girls, sitting on the beds in their nightgowns, decided to make some hot chocolate and used a Bunsen burner to heat it up. A girl on Condie’s bed accidentally knocked over the burner. The bed caught fire first and quickly spread to Condie’s nightgown. Screaming, Condie hurried to the door and out into the hall. Had she dropped to the floor and rolled around, she likely would have avoided disaster. Instead, she raced down the hall, the fanned flames now consuming her. By the time her friends managed to put out the fire, Condie had suffered severe burns over her entire body. She somehow managed to survive for a day or so, but finally—and perhaps mercifully—she succumbed. 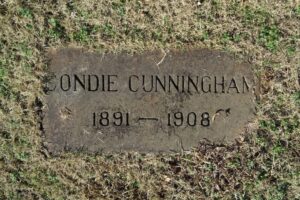 THE FACE IN THE DOOR

It is not unusual for the spirits of those who died sudden and violent deaths to be trapped in the place where they had perished. Condie Cunningham’s ghost soon took over the fourth floor of the residence hall. Her screams could be heard up and down the halls. So could her footsteps pounding the floor. There were even reports of a girl’s voice shrieking “Help me!”

Condie’s dorm room continued to be in use for a while…until a student who was staying there heard noises outside the door. She peered down the hall and saw the specter of a girl on fire running toward her. Screaming, she slammed the door, turned around—and discovered that her bed was on fire. The next morning the girl left the school. She never did return. 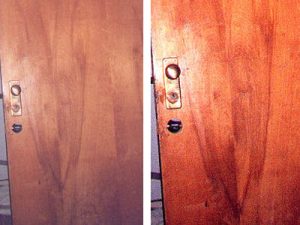 Perhaps the most unnerving thing of all to emerge from this tragedy was what happened to the door of Condie’s old room. Shortly after her death the image of Condie’s screaming face, with her hair still ablaze, appeared in the wood. The creeped-out headmistress had the door replaced, but soon afterward the face appeared once again. Subsequently the door was replaced a number of times, with the same results. The last door joined the others in a storage room, and to this day there is no door on Condie Cunningham’s old room. Even if it had a door, no University of Montevallo student would stay there.

Sadly, to this day students report paranormal activity at the university. Condie still runs up and down the halls, screaming. She is even seen and heard in the shower areas. Will the Girl on Fire ever find peace and move on? Hard to say…

There are quite a few video presentations about Condie Cunningham on YouTube, if you’re interested. The link that I included is to a brief one, but you’ll see plenty of others listed.