Since presenting this post in 2019 the sixth film in the franchise, Jurassic World Dominion, hit the big screen and came out on Blu-Ray. This alters my rankings a bit, as you’ll see. 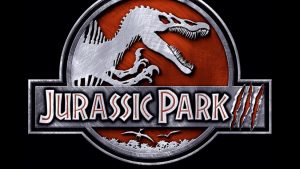 Yes, I’m going to rate the six films in the Jurassic Park franchise (IMHO, of course), but it is not going to be in a worst-to-first way. I love dinosaur movies in general, and these were all entertaining, so I think good-to-better-to-best would be more accurate. Here goes.

This one seems to be at the bottom of most lists. After the creative and financial success of the original film, and the continued solid box office of the second, a third film was inevitable. But creatively, it seemed as if the filmmakers were running out of ideas. 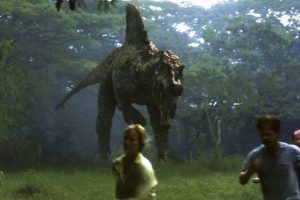 Running from dinosaurs is an ongoing theme.

Sam Neill, who played paleontologist Dr. Alan Grant in the first film but skipped the sequel, returned in this one, as did paleobotanist Dr. Ellie Sattler (Laura Dern) in a cameo role. Grant is hired by divorced couple Paul and Amanda Kirby (William H. Macy and Téa Leoni) to find their son, Eric, who disappeared on Isla Sorna with his parasailing instructor. Though he’d never been on that island—Jurassic Park was built on Isla Nublar—he agrees to give them a tour from the air when the Kirbys offer him a huge payday to fund his research.

Turns out the Kirbys are not rich, and their check would’ve bounced sky high. They are also incredibly annoying at best, and at worst they are responsible for the deaths of a number of people, not to mention the strongarm tactics their hired goons use with Grant when he advises them not to land the plane on the island.

But hey, there are dinosaurs galore, and the requisite chases, along with the scenes inside and outside the giant aviary, are cool. Also, the discovery that Grant makes about the intelligence of velociraptors will establish a theme that resurfaces years later in the Jurassic World films. 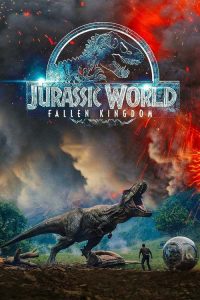 This sequel to Jurassic World (2015) reunites velociraptor trainer Owen Grady (Chris Pratt) and former park operations manager Claire Dearing (Bryce Dallas Howard). The theme park, rebuilt on Isla Nublar, had been destroyed in the previous film, and now an active volcano is about to obliterate the entire island. Claire, now a dinosaur activist, wants to save the remaining dinosaurs before they are killed and relocate them to a place where they can roam free.

To the supposed rescue comes Benjamin Lockwood, the former partner of John Hammond—the creator of Jurassic Park—who advises Claire and Owen that the undertaking has already begun, that only a few species—including velociraptors—remain on the island. They will go to Isla Nublar and help the extraction team remove as many dinosaurs as they can before the island joins Atlantis.

But unknown to Lockwood his slimy aide, Eli Mills, has other plans for the dinosaurs. He wants to auction them off to the worst of the worst from around the world, to be used as offensive weapons. Holy crap! (Plot-wise, this is kind of a reach.) 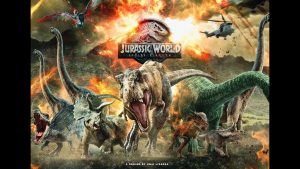 The fact that both theme parks, each costing billions of dollars, were built on an island with a potentially active volcano stretches the belief system. Did no one think to do a geological survey of Isla Nublar before making such an investment? That said, the scenes on the island as the volcano erupts are awesome, with some great CGI effects. Owen, Claire, and their team have to deal with both rampaging dinosaurs and some nasty mercenaries.

The other thing that left me incredulous is that the second half of the movie took place indoors. What, with dozens of massive dinosaurs? True, Lockwood’s ginormous mansion in Northern California made Buckingham Palace look like an outhouse, but still… This was where the auction took place, so all of the nasty folks in attendance provided a nice smorgasbord for the rampaging beasts. 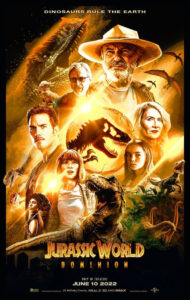 By now I’ve watched this entry a number of times, and I must say, I liked it better with each viewing—though it seemed obvious that the well of ideas for the franchise had begun to run dry. Four years after the events in Jurassic World: Fallen Kingdom we have dinosaurs roaming all over the planet, and people are not thrilled about it. Owen Grady and Claire Dearing are secretly raising—and protecting—Maisie Lockwood, the biogenetic granddaughter of Benjamin Lockwood. Owen and Claire continue their efforts to save the dinosaurs.

The villain of the piece is Lewis Dodgson, the asshole who first tried to steal InGen’s research all the way back in Jurassic Park. (Remember the Barbasol can?) He’s now the CEO of Biosyn Genetics, headquartered in Italy, where he’s established a dinosaur sanctuary and is supposedly using the dino DNA for the good of humanity. Nope, he has a God complex and wants to control, among other things, the world’s food supply. He’s bioengineered giant prehistoric locusts that are destroying crops everywhere—except for those crops that were planted with Biosyn seeds. He is a serious sociopath.

Enter the three main characters from the original film: Drs. Alan Grant, Ellie Sattler, and Ian Malcolm (Jeff Goldblum). They want to put a stop to Dodgson’s dastardly doings. Ultimately they’ll join forces with Owen and Claire. Those two have also traveled to Italy to rescue Maisie, whom Dodgson has kidnapped. The thing I liked most was that our three old-timers were not there to do cutesy cameos. They were totally involved in all aspects of the plot, and they did well. Seeing the old guard and the new guard working together was great. With that, and all of the exciting dinosaur action, I could forgive a somewhat convoluted plot.

We’ll continue “Jurassic Rankings” next week with “better” and “best.”