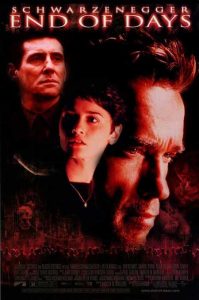 Ah, for the good old days, when the Governator made action movies… This post first ran in 2018.

Arnold Schwarzenegger in a horror movie? Yep, he starred in the 1999 clunker, End of Days. Wait, did I say clunker? Well, the reviews were uniformly bad, but since I’m easily entertained, that never bothered me. I get a kick out of this film, and in truth it is an action/horror story. And as we all know, the Governator does “action” well…or at least he did.

THE END IS NEAR

With that tagline, and no spoiler alert, here is a brief synopsis. In 1979 a comet arcing over the moon prophesizes the birth of a girl baby chosen to bear the child of Satan when he returns at the end of the millennium. The Pope tasks his cardinals with finding and protecting the girl, though a few of them, the Vatican Knights, are sworn to kill her. Neither faction will have any luck for twenty years.

But Satan’s minions find her easily, as the baby, who bears a certain birthmark, is born in—where else?—New York City. Her name is Christine York, and she will be protected until their master can ravage her in the last hour before New Year’s Eve, 1999. 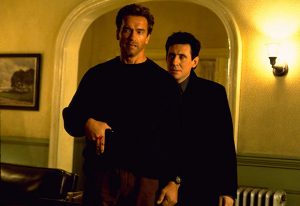 Satan can conjure up some wild promises.

Fast forward to a few days before the end of the millennium. Satan shows up early and inhabits the body of (what else?) a Wall Street banker (Gabriel Byrne). He causes a few mass deaths for his amusement while seeking out the potential mother of his child.

Jericho Cane (Arnie), who works for a private security company, is a depressed man. Once a cop, his wife and daughter were killed in a mob hit. Only his partner, Bobby, keeps him from committing suicide. They head for lower Manhattan, their job to protect the Wall Street guy whose body Satan inhabited. Jericho winds up taking a bullet for Satan (he was wearing body armor), who promptly disappears. The shooter turns out to be an elderly priest who, after Jericho corners him, shouts, “The thousand years has ended, the dark angel has been loosed from his prison.” Quite a feat, considering that his tongue had been torn out.

The innocent Christine York (Robin Tunney), now twenty, has suffered from weird visions and dreams most of her life. Now that the time is near, those visions include being ravaged by a strange man. She is a troubled young woman.

Jericho and Christine will not take “no” for an answer from Father Kovak.

Satan shows up at the hospital where the elderly priest, who had been sent by the Vatican, is being treated and crucifies him on the ceiling. When Jericho and Bobby show up, they discover that the priest had carved messages into his body. One of them appears to read, “Christ in New York,” which they finally figure out to mean “Christine York.” Off they go to find her.

Jericho and Bobby show up at Christine’s house as a bunch of Vatican Knights are just about to kill her. Some are taken down, others escape. Jericho stays inside with her, while Bobby watches the house from their van. Satan appears and blows up the van, apparently killing Bobby. Jericho and Christine escape, though not before Satan has a look at his new adversary: Jericho.

THE DEVIL MADE ME DO IT

Our hero takes Christine to the church where the elderly priest had been stationed. The head priest, Father Kovak (Rod Steiger), swears that they can protect the girl until the danger has passed. Jericho is dubious, but Christine chooses to remain in the church. 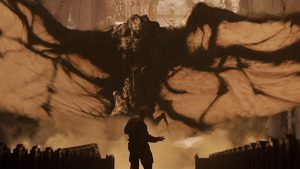 Satan finally reveals his true self. It ain’t pretty…

Jericho heads for his apartment, where he receives an unwanted visit from Satan, who shows him a vision of Jericho’s wife and daughter, now alive and kicking. Tell me where Christine is, Satan says, and all this can be yours again. Jericho nearly gives in but winds up throwing Satan out the window of his high-rise. (Hey, it’s Arnold!)

Surprise, Bobby shows up at Jericho’s front door, seemingly alive and well. Uh, the truth is, just before he turned into a charcoal briquette Bobby made a pact with Satan, who brought him back to life to serve the dark angel. He convinces Jericho that it really is his best friend, and off they go to the church—with both Satan and the nasty Vatican Knights bringing up the rear. Oh yeah, some definite “Holy Shit” moments (no pun intended) coming up…

So this is where I’ll stop, with plenty of action ahead, in case you’ve never seen this flick and are now highly motivated. End of Days hit the theaters in November of 1999, just about the time Y2K was in everyone’s thoughts. Computers worldwide would stop working, planes would fall from the skies, and all manner of paranoia would overwhelm the planet, so the idea that Satan would extend his evil rule was not that farfetched. Thankfully, 2000 came and went without a hitch or a glitch.