Who else—or WHAT else—roams the underground of Manhattan? This post first ran in 2017. 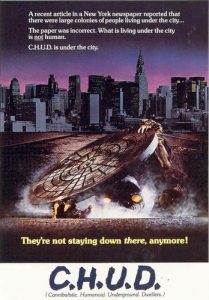 When I wrote about the late John Heard last week I mentioned that one of his earliest screen roles was in the 1984 horror movie, C.H.U.D. I would’ve eventually written about this weird film, given that it is one of my Guilty Pleasures—so why not now?

A woman is walking her dog late at night along a street in lower Manhattan. A manhole cover is lifted from below, and both woman and dog are pulled down by—something.

Photographer George Cooper (Heard) and his girlfriend, Lauren Daniels (Kim Greist) have just moved in to a nearby apartment building. George has taken a hiatus from shooting fashion models to photographing homeless people, specifically the “undergrounders” who live in the tunnels and sewers below the city. 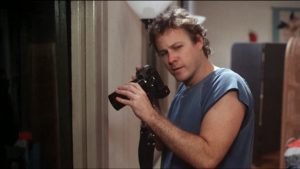 George may not want to photograph a CHUD.

Captain Bosch from the local police precinct has a special interest in a number of missing persons cases, including that of his wife—the woman who disappeared at the beginning of the film. Although he’s been told to keep a lid on everything by higher authorities, he is determined to investigate. He questions A.J. “The Reverend” Shepherd (Daniel Stern), who runs a soup kitchen for the homeless and knows them all, even the undergrounders. A.J. says that many of the latter have stopped coming up, and he believes there is a government cover-up going on, given some of the evidence that he’s discovered. What are they hiding down there? 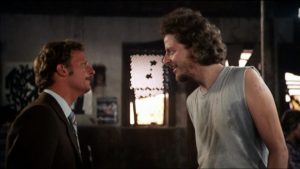 George is called to the precinct to bail out a woman, Mrs. Monroe, who trusts him. She is an undergrounder who tried to steal a gun from a cop. She tells George that the undergrounders need it for protection. From what? George wants to know. Mrs. Monroe takes him down into the tunnels, where they find her brother badly mutilated by—something. Later on George will lead a reporter into the tunnels, where the poor guy will get killed, while George becomes lost.

Bosch and A.J. take the latter’s evidence to a meeting with the top cops and a creep named Wilson, apparently from the Nuclear Regulatory Commission. This guy is so uptight that he must have a broomstick shoved up his ass. He denies that there is anything questionable under the city, even though Bosch has some of George’s photos (taken from his apartment) showing one of the mutilated undergrounders. This pisses A.J. and Bosch off no end. 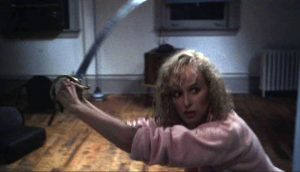 Wilson sends a crew down to clean things up, while Bosch dispatches cops with flamethrowers to accompany them. They encounter some of the creatures and inevitably become toast. Wilson finally admits that some of the undergrounders have been exposed to radiation and have mutated into the creatures that he calls CHUDs, an acronym for Cannibalistic Humanoid Underground Dwellers.

GAS THEM ALL, INCLUDING THE GOOD GUYS

A.J. has threatened to go to the press, so Wilson has ones of his goons follow him. The goon locks A.J. in his cellar. The only possible way out is through the tunnels—yep, the same ones haunted by the CHUDs. 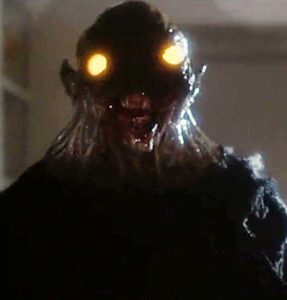 CHUDs just have a glow about them.

By this time all the shit has hit the fan. One of the CHUDs has surfaced in the basement of George and Lauren’s apartment building and is stalking the poor woman. Wilson has ordered gas poured into the tunnels to kill the CHUDs, as well as A.J. and George, even though he knows the men are trapped down there. He has all the manhole covers sealed so that neither the CHUDs nor the guys can escape. George and A.J. finally meet, and together they work at trying to get out of the underground. They also make a disturbing discovery and learn what C.H.U.D. really means.

No spoiler alert here, though I will make mention of one brief scene near the end. A couple of young cops in a diner are in the wrong place at the wrong time when some of the CHUDs come up. One of the cops, in an early bit role, is John Goodman.

C.H.U.D. is a goofy horror film that also has a few laughs, both intentional and unintentional. The critics were not kind, but it did make some money and even spawned a sequel. (C.H.U.D. II: Bud the CHUD. I kid you not!) Daniel Stern is always worth the price of admission, and he must have enjoyed working with John Heard, for they would later appear together in The Milagro Beanfield War and the Home Alone films. If you have 88 minutes to kill, check C.H.U.D. out.