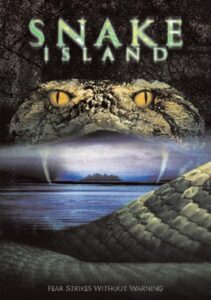 Why’d it have to be snakes! I first presented this slithery post in 2019.

Bestselling horror novelist Malcolm Page is on his way to Snake Island—which is also the title of this 2002 creature feature—to gather material for his next book. The other tourists and crew on this African river cruise are in awe of the guy; one crew member has already offered to jump his bones, but he gently tells her no.

Malcolm is played by William Katt, whose claim to fame was starring in the television series, The Greatest American Hero two decades earlier. He is the only “name” actor in the film, so what does that tell you? Anyway, Malcolm is about to find more than he bargained for in his research.

WHY’D IT HAVE TO BE SNAKES?

That’s what I’d like to know. Snakes creep me out big-time, so why am I always watching snake movies? In any case, when the cruise boat stops at the Snake Island dock, we know that the smorgasbord has just arrived. The goal is to drop off Malcolm, as well as have crewman Eddie check on his two partners at the Snake Island Lodge, before taking off down the river. The partners are not around, of course; they’ll be found later on, dead as doornails. And the island’s slithery population appears to be spying on the new arrivals at both the lodge and the dock. 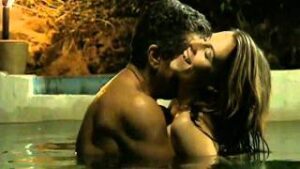 When an accident causes the boat’s fuel to escape, all of the tourists and crew join Malcolm and Eddie at the lodge. The snakes are just about waxing orgasmic at the sight of this movable feast. The tourists are bummed out at first by the delay, but the nice rooms at the lodge, along with an open bar, calm them down. A party ensues, with lots of T&A in evidence, and before long some of them start pairing off for the inevitable dancing in the sheets. The crew member who first propositioned Malcolm just about jumps his bones then and there, but our virtuous horror writer, who is about twice her age and married, again turns her down. (We writers must have great sex appeal.)

By this time snakes of all sizes, shapes, and colors have gathered in and around the lodge, even species that, according to herpetologists, don’t belong anywhere near Africa. The body count now accelerates as tourists and crew members alike get picked off one by one, or in pairs. A newlywed couple is preparing to have sex, the husband waiting impatiently in bed, the wife donning her red Vickie Secrets to turn him on even more. As she stands next to the bed it appears that she is succeeding, his burgeoning penis lifting the sheets on high. But no, hubby is dead, and the thing raising the bedding is a cobra—which immediately takes out the wife. 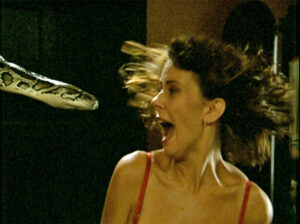 As you can imagine from the scene just described, Snake Island does not take itself too seriously. There are a number of laughs mixed in with the peril. But as is the norm with semi-cheesy creature features, you just keep your expectations low and you’ll enjoy it. To the filmmakers’ credit, the snakes are all real; no phony-looking CGI here. And the survivors are predictable, especially horror novelist Malcolm Page, who will go on to write another bestseller titled—what else?—Snake Island.