This film provides some big laughs while grossing viewers out. The post first ran in 2019. 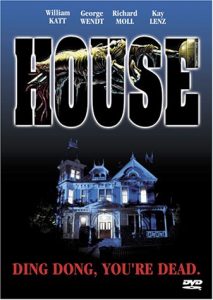 The 1986 comedy/horror flick, House, not only fits the bill as a film in which the main character is a writer, but more specifically, a horror writer. I’ve written about a bunch of movies in my “Films About Writers” series, and a number of them focus on those of us who write the scary stuff. Weird…

HORROR HAS FOUND A NEW HOME

Or not, because House, even with that tagline, mostly plays it for laughs. William Katt plays successful horror novelist Roger Cobb. (Katt also played a successful horror novelist in the film, Snake Island. Check out my recent post.) Early on we see him at a bookstore signing, where he is besieged by his adoring fans—they look mostly like rejects from old zombie movies. His literary agent is also on hand, his goal to noodge Roger into writing something new. He hasn’t done that for a while, and his publisher is getting antsy.

Roger, we learn, is a troubled man. He and his wife, Sandy, have been separated ever since their young son, Jimmy, vanished a while back when they were staying at his Aunt Elizabeth’s house, a creepy Victorian mansion. In addition, Roger is haunted by memories—and ghosts—of his service in Vietnam, specifically the loss of his friend, Big Ben. He wants to write about it, but so far all he has is a title, and a serious case of writer’s block. 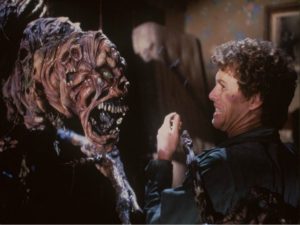 When Aunt Elizabeth, carrying on about how her house is haunted, hangs herself in it, Roger inherits the place, ghouls and all. Rather than sell the place he decides to move in, hoping he’ll find the motivation to write, and also to be closer to the place where he last saw his son. His initial success comes at a price, as graphic images of his war experiences bombard his senses.

OUT OF THE CLOSET

Before long, the things that Roger begins to experience in the old house come right out of the “Weird As Shit” file. Among them is the deformed, monstrous creature that pops out of a closet in Aunt Elizabeth’s bedroom every night at the stroke of twelve. Garden tools from the shed levitate and stalk Roger throughout the house. His wife appears, and after they talk she turns into a hideous creature that he blows away. He fights off gremlins that are trying to kidnap a neighbor’s kid whom he is babysitting. Needless to say, Roger is not faring too well in the sleep department. 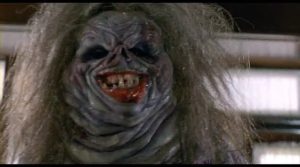 Is Roger’s wife having a bad hair day?

But the more his memories of Vietnam come flooding forward, the more Roger is able to start putting two and two together. His buddy, Big Ben, was badly wounded by Viet Cong while they were out on patrol. Knowing that being captured would mean they’d torture him, Big Ben pleads with Roger to kill him. But Roger is unable to do this, and Big Ben is ultimately tortured for two weeks before finally dying. As the enemy carries him away, Big Ben swears that he will get even with Roger.

So is Big Ben responsible for all that has been happening to Roger, and even more important, for the disappearance of his son? Seems that way, especially when Roger finds a portal to a dark, creepy parallel world in the medicine cabinet—and hears Jimmy calling to him. But what will happen to Roger if he attempts to enter this weird place? And how will he get past the undead form of Big Ben, who is now on hand to stop him? 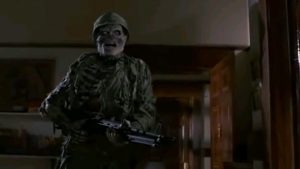 Big Ben is pissed at Roger.

Although much of the storyline for House sounds serious, be assured that it is handled with tongue firmly planted in cheek. Yes, it is a goofy flick, and its popularity (read: box office success) led to no less than three sequels. You just never know.