Mom & Pop stores have other problems these days. This post first ran in 2016. 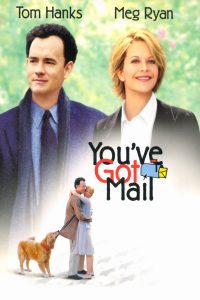 This 1998 romantic comedy stars Meg Ryan and Tom Hanks, one of the most popular couples in that genre. But You’ve Got Mail offers another sobering reality from that era: the Big Box discount store pushing out the Mom and Pop shop of days gone by. In this story we’re talking about bookstores.

Before addressing the film I would like to share this with you. Yes, the Big Box stores were pushing out the little guys in the late ’90s, but by then the transformation had been well under way. Two decades earlier—1973 to 1976, to be exact—I owned and operated a small, full-service bookstore in San Diego called Sir Books. I almost always had what customers wanted, even though I might’ve only carried two copies of a specific title, not six or eight or a dozen like the big chains.

Speaking of the chains, at the time the competition was primarily Waldenbooks and B Dalton, their stores located in major malls. Back then they did not offer discounts, so what you bought for $6.99 in my shop cost the same in theirs.

One day a couple of women came into my little shop and looked around dubiously. I overheard one of them say, “I’m sure they don’t have it here.” I walked over and asked if I could be of help. The woman mentioned a title, which of course I had in stock. She carried it around the shop while they browsed for a few minutes. Then, after returning the book to the display table, they hurried out of the store, the first woman saying, “I’ll be over at the mall next week and I’ll get it at B Dalton.” Enough said. 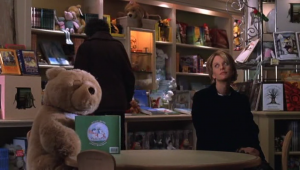 Kathleen is proud of her bookstore.

Kathleen Kelly (Ryan) is the owner of a children’s bookstore called The Shop Around the Corner, which has been in her family for over four decades, catering to kids and parents on the Upper West Side of New York City. She’s also an email junkie and, using the screen name of “Shopgirl,” she has found an anonymous friend, “NY152,” in a chatroom. Every day she looks forward to that familiar AOL greeting that many of us knew back in the day.

It so happens that NY152 is the screen name of Joe Fox (Hanks), whose family runs a chain of Big Box, deep discount bookstores called Fox Books, and one such mega-store is about to open—well, just around the corner from Kathleen’s shop. Joe, his father and grandfather seem to relish putting independent bookstores out of business. His email persona is quite different from his corporate one. 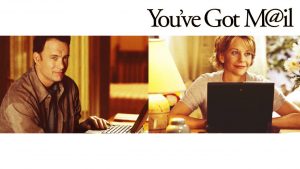 “Shopgirl” and “NY152” are good friends…online.

Prior to the opening of his store, Joe brings two of his young relatives to a Story Hour reading at Kathleen’s shop and is kind of smitten by her. But when she voices her concerns over the opening of a mega-store nearby, Joe makes a hasty exit. He’s glad that he didn’t mention his last name.

At a publishing party the following week they inevitably cross paths, and the furious Kathleen accuses him of spying on her, while he makes fun of her store. These two do NOT like each other.

But since Shopgirl and NY152 are great online friends, and since they keep all of their chats generalized, they continue to correspond and pour their hearts out to each other. In addition to the bookstore issues, both are mired in crappy relationships. Eventually they agree to meet face to face—though reluctantly.

By this time Joe’s mega-store has put The Shop Around the Corner out of business. Kathleen has visited Fox Books, which was not as impersonal as she thought, though in the children’s section she helps a know-nothing clerk who could not answer a customer’s question. (That’s the kind of help you can almost always expect in an indie bookstore.) 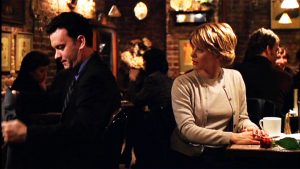 Good friends? In the real world, not so much…

The meeting between Shopgirl and NY152 is to take place at a small restaurant. Kathleen has brought a copy of Pride and Prejudice, along with a rose, to identify herself. When Joe spots her from outside he freaks and takes off but then returns and approaches her table. He does not tell Kathleen that he’s her online confidant, and they resume their antagonistic relationship. She is ultimately bummed that NY152 did not show up…

I’ll stop here, just in case you’ve never seen this film and want to check it out, or haven’t seen it for a long time. But hey, You’ve Got Mail is a romantic comedy, and a delightful one at that, so you can pretty much guess which path it will ultimately follow.

But one final word on the more serious undertone of this movie: the Fox Books mega-stores of the world pushing out all of The Little Shops Around the Corner. A few years after You’ve Got Mail premiered, Borders Books opened a two-story mega-store in downtown San Diego in what is still called the Borders Building. I drove past it countless times on my way to Petco Park and stopped in upon occasion to browse and buy.

That Borders is now a Brazilian steakhouse. Like The Little Shop Around the Corner, the Big Box book shops have been pushed out by the pricing and convenience of internet shopping and eBooks. What goes around, comes around, I suppose. So twenty years from now, what will make Amazon go the way of the dodo?