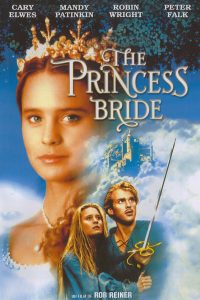 This is one of my all-time favorite films, and likely one of yours too. I first presented this post in 2016.

Okay, who hasn’t seen the 1987 fairytale gem, The Princess Bride? Not ever seeing it would be inconceivable! This film, an instant cult classic, is on countless Top Whatever lists in comedy and other genres. It is definitely one of the fifty or sixty films in my Top Ten. And I’m not a “Liar! Liar!” 😊

William Goldman wrote the screenplay from his 1973 novel of the same name. Film rights were quickly snapped up, but the story spent quite a long time in development hell, with Goldman ultimately buying back his rights. A number of attempts were made to finance the film, and at one point the popular Christopher Reeve expressed interest in playing Westley. But nothing happened until Rob Reiner got involved. Good choice—he would go on to direct the movie.

Here is a quickie synopsis of a film that had, among its various taglines, one that read: “Scaling the Cliffs of Insanity; Battling Rodents of Unusual Size; Facing Torture in the Pit of Despair—True Love has Never Been a Snap.” A framing story has a Grandfather (Peter Falk) visiting his sick Grandson (Fred Savage) and offering to read him a book called The Princess Bride. The kid is not thrilled, but he says okay—as long as there is not too much “kissing stuff.” Grandfather serves as the narrator, and Grandson occasionally interrupts with questions or concerns. 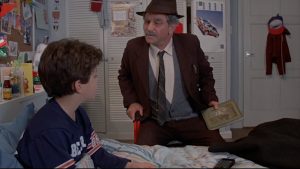 Grandson is not too happy about Grandfather reading him a book.

In a Land of Yore called Florin, farm girl Buttercup (Robin Wright) takes pleasure in tormenting her hired hand, Westley (Cary Elwes), who always replies, “As you wish” to all her orders. They fall in love, of course, but Westley goes off to find his fortune, vowing to return. When Buttercup learns that he was killed by the Dread Pirate Roberts, she grieves for five years.

Florin’s slimy Prince Humperdinck (Chris Sarandon) wants to marry Buttercup, but not for love. Aided by his top henchman, the six-fingered Count Rugen (Christopher Guest), his plan is to have Buttercup abducted by three bandits: the leader, Vizzini (Wallace Shawn), the huge Fezzik (Andre the Giant), and a swordsman, Inigo Montoya (Mandy Patinkin). She will be taken to a neighboring kingdom and murdered. Florin will then blame that kingdom, which will start a war.

“YOU KILLED MY FATHER” 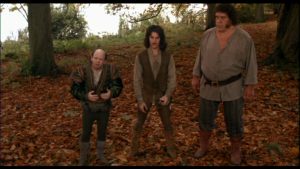 Vizzini, Inigo Montoya, and Fezzik are up to no good.

The trio succeeds in grabbing Buttercup, but they are followed by a masked man dressed in black. He first defeats Inigo in a duel and wins the Spaniard’s respect. Inigo tells the guy that he’s been searching all his life for a six-fingered man who murdered his dad. You all know what he plans to say to the murderer when he finds him, right? “Hello, my name is Inigo Montoya, you killed my father, prepare to die!” It is one of the most iconic lines in all of filmdom. In truth, I could write an entire post on great lines from The Princess Bride.

The masked man next defeats the giant, also earning his respect, and wins a battle of wits with Vizzini, who drinks a cup of poison and dies. Buttercup is now his, but she’s not too thrilled. She pushes him down a hill and snaps an order at him, to which he responds, “As you wish.” Her Westley, who has inherited the mantle of the Dread Pirate Roberts, has returned to her. 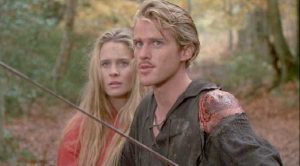 Westley will protect Buttercup at all cost.

By this time the Grandson, who has been raised on video games, is totally into this boring thing called a book, and he asks his Grandfather to continue. After some adventures, Westley and Buttercup are captured by Humperdinck and Rugen. Buttercup promises to marry the prince if he spares Westley’s life. Humperdinck agrees, but instead, when they return to the castle he sends Westley down to the Pit of Despair, where Rugen and a weird dude called the Albino experiment with a creative torture device. Even on its lowest setting, Westley is in dire pain.

Buttercup believes that Humperdinck sent Westley back to his pirate ship. When she tells the prince that she truly loves Westley, the prince acts all kindly and says that he’ll have his men bring Westley back to her, which of course never happens. He also extracts her promise to marry him if Westley turns up dead. When Buttercup finally figures out that he’s a lying asshole, she vows to kill herself rather than marry him. In a rage, the prince races to the Pit of Despair and cranks up the torture device, killing Westley.

(The grandson calls foul. Westley can’t die! His Grandfather tells him to shuddup—in a nice way—and let him keep reading.) Inigo and Fezzik, now reunited, have learned that Rugen is the six-fingered man that Inigo seeks. But how can they get into the castle? There’s a lot of security, now that the wedding of Humperdinck and Buttercup is about to take place. They need a brain, and they decide to seek out Westley. 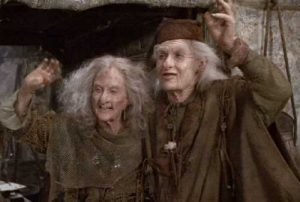 “Have fun storming the castle!”

They find him, of course, dead. Deciding they need a miracle, they schlep him to Miracle Max (Billy Crystal), a wizard who brews potions. Max says that Westley is not all dead. “He’s mostly dead,” he tells them. His potion brings Westley back to life (Grandson is relieved) and, although paralyzed, he concocts a plan that gets them into the castle.

At the wedding ceremony Humperdinck, hearing the commotion outside, orders the (hilarious) Impressive Clergyman to rush through the vows. The service is not consummated, but Buttercup, thinking otherwise, is off to her room to kill herself. While Fezzik helps Westley look for her, Inigo chases the cowardly six-fingered Rugen through the castle. Though wounded, Inigo finally confronts him and, after delivering his famous line a few more times, runs him through. 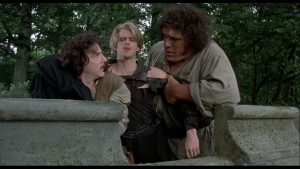 Westley, still partly paralyzed, has managed to crawl into Buttercup’s room and stop her from killing herself. Humperdinck shows up, but he’s no match for Westley, even in his condition. They tie him up and leave him to suffer the disgrace of a chicken-shit.

Now recovered, Westley rides off with his true love, Buttercup, and his friends. At this point, Grandfather tells Grandson that the rest is “kissing stuff,” but the kid says that he doesn’t mind, so Grandfather finishes the book. Grandson then asks him if he’ll stop by tomorrow and read it to him again. Grandfather’s reply: “As you wish.”

The Princess Bride is, plain and simple, a perfect movie that continues to delight viewers of all ages three decades later. I will watch it many more times before the Mother Ship arrives.