Throwback Thursday: Exploring THE PLANET OF THE APES—Part Five 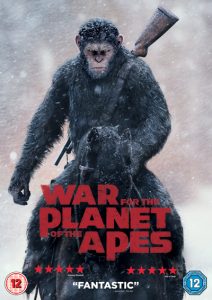 Will we ever see another Planet of the Apes film? Hollywood says that one is in the works…but you know Hollywood. This post first ran in 2018.

If you read this blog, you may recall that Part Four in this series appeared a little over a year ago. At that time War for the Planet of the Apes, the ninth film in the franchise and the third in the latest reboot, had not yet been released. It came out later that summer, and I saw it then but chose not to write about it until I watched it at least one more time, which I did last week. (In sequence with the first two, of course.)

The consensus: it is a brilliant film, both uplifting and heart-wrenching, and actor Andy Serkis’s third go-around as Caesar, the leader of the intelligent apes, is Oscar-worthy, I kid you not. For a change I agreed with the critics, whose aggregate score for War on Rotten Tomatoes was 94%. It was a fitting conclusion to both the trilogy and the franchise…if indeed the series is done. 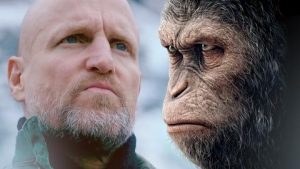 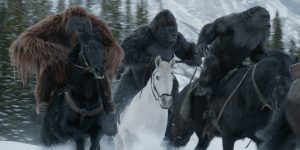 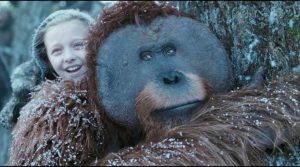 Closer now, Caesar is stunned by what he discovers. His entire band of apes, including Cornelius, his young son, have been captured. The quarantine facility has been turned into a labor camp, and The Colonel, fearing an even more superior military force coming to destroy him, has ordered the construction of a gigantic wall to keep his enemies out. (A crazed leader demanding a massive wall be built? Couldn’t happen in the real world—could it?) The apes work long hours, with no food or water, and are suffering greatly. 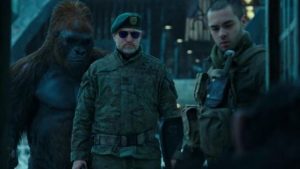 But will there be more? I learned that, about two years ago, another sequel was being “discussed.” Yeah, but as I said last week about San Andreas, I’ll believe that when I’m on my way to the local Cinepolis to see it. One can only hope.