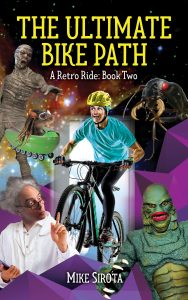 Four years ago I revised and reissued the second book in my comedy/sci-fi series, The Ultimate Bike Path. (A Retro Ride: Book Two.) Along with all his strange adventures on the other side of the numerous gates along the Path, cosmic cyclist Jack Miller encounters some weird riders on the mhuva lun gallee itself. Here are two of them.

A fellow traveler appeared on the Path ahead. In all respects it was an elephant, save two: its fleshy trunk was obscenely long, and it had a face that more closely resembled a common housefly. It “rode” along on fire engine-red “boots,” each of which had two wire wheels the size of Frisbees.

My apologies to Dumbo, but I finally saw an elephant-fly.

Pulling up parallel to the creature, but two yards away, I threw it a salute and said, “Hey, how’s it going?”

The thing looked at me and grinned (I think). Its pink proboscis reaching for me, it said, “I can’t wait to pull out your heart and intestines and feed on them, yum!”

Was this some sort of practical joker, or did they allow cosmic psychos on the mhuva lun gallee? I guess so, since Atoris the Evil once traveled it. So, assuming the UT6 was functioning properly and not misinterpreting what the elephant-fly said…I got the hell out of there, fast!

A thought for concern while riding along the Ultimate Bike Path: we already know this is some great universal artery, right? So it stands to reason that the different physical characteristics of life-forms with access to it is infinitesimal. They could be twenty feet tall, fifteen feet across, and fill up a lot of the tunnel.

Or they could be really small.

Small enough to be turned into road splat when my tires ran over them.

On the other hand, if these centipede beings, amoeba-folk, whatever, were intelligent, they would stay far away from the center of the Path; probably inch (or millimeter) their go-things along the bases of the walls. I hope so.

Maybe there was another mhuva lun gallee just for wee life-forms, about the diameter of a toilet paper tube, where…

Okay, Jack makes himself crazy again. Accept the last idea as gospel and leave it at that.

So of course, just as I’m reconciling this, I come across a small rider.

Not under-the-mist small, since I could obviously see it. Still, I overtook it quickly and would have caused serious pain had I not slowed down and veered off to the side. 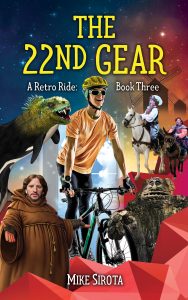 Paralleling it now, I had a better look at this traveler. It was a skinny rat with horn-rimmed glasses and dreadlocks. Reminded me of half the erstwhile Milli Vanilli. Maybe it would lip-sync when it spoke; I’d have to see. It was about eighteen inches from end to end, most of it a pink fleshy torso, the rest a gross rodent’s tail, what you hate to see disappearing around the corner of your baseboard. Its go-thing looked like a green bedpan with eight Tinkertoy wheels, which it pedaled (I think) from the inside.

“Nice weather we’re having,” the rat said in a voice that, I swear, sounded like Peter Jennings. It reached out a tiny paw, which I leaned down and shook.

Looking around at the tunnel walls and ceiling I said, “Uh, right, nice weather.” At least he was more personable than the elephant-fly.

The rat’s beady eyes looked me up and down. “I don’t think I’ve seen anything like you before.”

“Likewise, I’m sure. Are you traveling the Path for fun and adventure?”

“Oh, hardly. I’ve been to dozens of worlds already and will travel to as many as I have to until I find someone who can cure my wullat.”

Say what? “Cure your wullat? What’s that?”

“It’s a disease; very rare one indeed, but I have it.”

“Is it…contagious?” I asked nervously.

“Yes, but only through direct skin contact, so you don’t have to…whoops!”

He looked at his paw.

I looked at my hand.

The diseased rat had touched me! 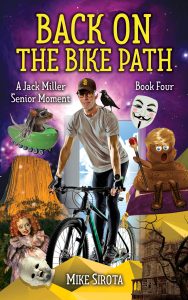 “Sorry about that,” he said sincerely as I frantically wiped my hand on my pants. “But maybe it only affects our species, so you need not worry.”

Yeah, but did I want to take that chance? Jesus, wullat! I didn’t like the sound of it. Suddenly I had this overwhelming compulsion to wash my hands.

Indeed, my alter ego, Jack Miller, is back for a second go-around. The alien-implanted 22nd gear on his 21-speed mountain bike is set to take him to some more weird and wild encounters. On his journey Jack will meet the Gill Man from the Black Lagoon; the Swamp Thing; Im-Ho-Tep, the Mummy; Freddy Krueger; the fog-enshrouded crew of the Elizabeth Dane, as well as Dr. Frankenstein and his latest creation, the Creature with the Asshole Brain. And all of that during just one of his detours along The Ultimate Bike Path!

You’ll find all of Jack’s adventures on Amazon in paperback and eBook. Enjoy!