Throwback Thursday: Another Cheer-Worthy Sports Movie That You Probably Missed

This wonderful film was “based on a true story” from long ago, and I happened to be around long ago to witness it live. 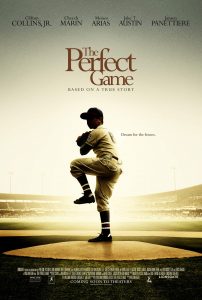 The 2009 film, The Perfect Game, was one of those “came-and went” movies that most folks weren’t even aware of when it breezed through their local multi-plexes. That’s too bad, because this heartwarming baseball story, based on true events, is a gem, easily one of the fifty or sixty movies in my Top Ten.

In 1957 a Little League team from Monterrey, Mexico, the Industriales, became the first non-American team to win the Little League World Series in Williamsport, PA. While the actual true story is inspiring enough, the screenplay for The Perfect Game focuses heavily on the journey of a group of kids who collectively became known as the “little giants.”

A man named César Faz had hopes of becoming a Major League ballplayer with the St. Louis Cardinals. But with racism rearing its head, all he could achieve was the role of clubhouse attendant, and in 1956 he is fired from that menial position. He returns to his hometown of Monterrey, and the following year finds him working at a backbreaking job in the local steel mill, and perhaps drinking a bit too much. 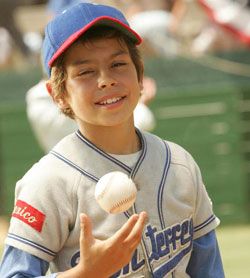 Ángel Macias is the leader of a group of carefree kids whose greatest love is baseball. They play on dirt fields with makeshift balls and bats, and they listen to Dodger games in the church with Padre Esteban (Cheech Marin, man), who also loves the game.

The enthusiastic Ángel first encounters César when he throws a ball against the side of his shack. César initially finds him a pain in the ass, but later relents when he realizes how serious the boys are about baseball, and how well Ángel can pitch. He agrees to coach them, and over time he whips them into a cohesive team. Calling former contacts in the states, he is able to get them status as Monterrey’s first Little League team.

A couple of subplots weave their way throughout the story. A humorous one involves César and Maria, a woman that he is most fond of but, given how wrapped up he is with the team’s practices, keeps missing their appointed dates. The other has to do with Ángel and his father, a bitter man whose older son, Ángel’s brother, had been killed earlier that year. He treats Ángel like crap. 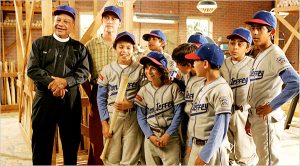 César and Padre Esteban take the boys to McAllen, TX for a taste of real competition. They’ll lose in the first round of the sectionals, César figures, but they will gain experience for the future. Their visas are only good for three days.

But the undersized Industriales win their first game. And the next…and the next. And so on, advancing from one Texas city to another, all the while encountering redneck assholes in the stands, in restaurants, and everywhere else. One ticket agent at a bus depot even refuses to give them the key to a “Whites Only” restroom. And it’s the same when they advance to the South regionals in Louisville, KY.

Even so, these pint-sized underdogs are overwhelmed by the kindness of strangers along the journey, and their winning ways endear them to the media, with one reporter in particular—a woman who joined them in Texas—telling their story to the nation. After winning the regionals in Kentucky, they are on their way to the Little League World Series semi-finals in Williamsport… 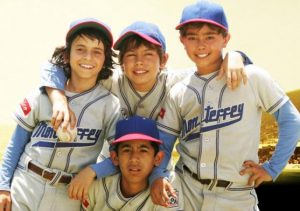 I’ll stop here. Obviously, the outcome of the story told in The Perfect Game is well-known. But with regard to the championship game pitched by Ángel Macias…well, you only need look at the title of this uplifting film. As I said earlier, the journey is the real story here. I will watch this film once a year until the Mother Ship arrives.