Throwback Thursday: A Few Thoughts On A Dark And Stormy Night

It’s interesting to see what kind of thoughts were running through my warped brain four years ago, when this post first ran. 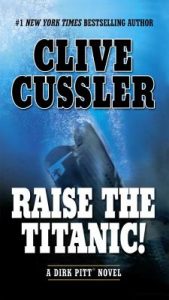 Okay, first of all I’m writing this on a sunny Southern California afternoon, and the next storm is not expected here till at least November. But hey, I am a purveyor of fiction, and as my dear bride can confirm, I tend to exaggerate upon occasion. Just a little bit though. So here are some thoughts and updates about this and that.

THE VERDICT ON DIRK PITT IS…

Earlier this month I wrote about my dilemma in re-reading some of Clive Cussler’s early Dirk Pitt novels. (See my post, “Where Was #MeToo Back In The Day?”) What was sexist, even homophobic to me now in the first three books did not appear to bother me when I first read them back in the 1970s and ’80s. I debated whether I wanted to continue with the series, even though I’d always enjoyed the over-the-top action plots.

Well, quite a few readers related to my dilemma, and they totally agreed with my comment that we all were products of our times. Watch any movie from the ’40s, ’50s, or whatever, and you’ll see sexism galore, not to mention verbal prejudice of any and all minorities, characters smoking throughout the film, and all kinds of behaviors that are mostly unacceptable today. (Or at least will be once the current toxic administration is flushed out.) Just enjoy the stories without the guilt, everyone told me.

So that is exactly what I’m going to do. I’m about to read a copy of Dirk Pitt’s fourth adventure—and the most well-known—Raise the Titanic. I doubt if Dirk will change anytime soon, but given that he appears in over twenty books, maybe that will happen down the road. I’m just not going to worry about it. 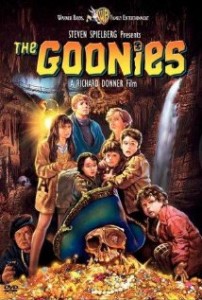 All of you Goonies out there know where that line comes from. The 1985 cult classic, The Goonies, is one of the funniest and most entertaining films ever, and a personal favorite of mine. In 2014 I wrote about the film’s director, Richard Donner (eighty-three years old at the time) stating that there would definitely be a sequel or remake, something that fans have been clamoring for since the dawn of time. (See my post, “A Goonies Sequel! Can It Be True?”) I was pretty jazzed about that.

But now it is four years later, and not a single thing supporting Donner’s comment has happened. Back then there was even a rumor of a Goonies Broadway musical, to which my only response was, gimme a break! (Insert the sound of Chunk barfing here.)

So don’t hold your breath on a Goonies sequel or remake. We’ll just have to be content with watching the original—but what’s wrong with that? 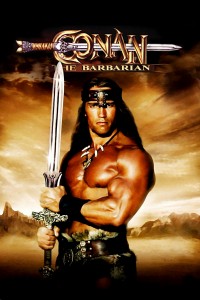 Through the years of writing this blog I’ve made it pretty clear that Arnold Schwarzenegger is one of my favorites. (That’s with acting, not politics.) He rose to fame in Conan the Barbarian (1982) and also made a sequel, Conan the Destroyer, in 1984. At that time another sequel was being planned, but it didn’t happen, and Arnold went on to make many other action films, then took a break to become the Governator of California from 2003-2011.

With Arnold’s return to acting in 2012, a new sequel titled The Legend of Conan was announced. Okay, fans got moderately excited, given that he was a heck of a lot longer in tooth than back in the 1980s. (He’s almost as old as me, and that’s old!) Still, it was Arnold, and he was going to reprise Conan! I’m sure they would have worked it out.

But like so many things with Hollywood, there was one delay after another—even though a script was supposedly written, actors on board, etc. And just about a year ago the producer stated that Universal Pictures had dropped the project. Bummer. I imagine it made Arnold want to repeat his lines from the first film, when asked what is best in life: “To crush your enemies. To see them driven before you. And to hear the lamentations of their women.” Watch your backs, studio executives!

Well, that’s it for a bright and sunny day. Now I’m not complaining, mind you, but in Southern California a dark and stormy night would be nice—once in a while.  😊