The Mystery Of The Ghost Blimp 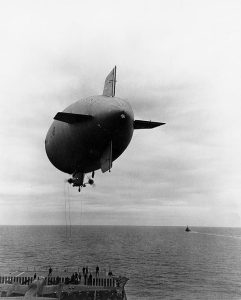 I’ve written about ghost ships and ghost trains, but a Ghost Blimp? This true story about an incident that took place during World War II ranks way up there on the Weird-O-Meter, I kid you not.

The U.S. Navy commissioned a number of non-rigid airships—blimps—prior to World War II, designating them as L-class. These were the same as the Goodyear blimps, which numbered five at the time. When the war started, the Navy “drafted” those commercial blimps and identified them as L-4 through L-8. They were utilized for training missions and coastal patrols, sent out from bases in New Jersey and California.

By 1942 Airship L-8 had made over a thousand trips without incident, its most important mission in April, when it delivered critical B-25 bomber parts to an aircraft carrier upon which the Doolittle Raiders would take off for their air strike on Tokyo. A subsequent mission on August 16th for an anti-submarine patrol seemed far less important than that.

At the time, L-8 had been assigned to Airship Patrol Squadron 32. That morning it lifted off just after 6 a.m. from Treasure Island in San Francisco Bay. Inside the gondola were the pilot, Lt. Ernest Cody, and his co-pilot, Ensign Charles Adams.

An hour-and-a-half into the flight L-8 radioed in and reported an oil slick a few miles off the coast of the Farallon Islands. Other vessels in the area verified seeing the blimp descend and circle the slick.

At 8:50 a.m. controllers at Treasure Island lost radio contact with L-8, nor did any other vessels at sea report sighting it. 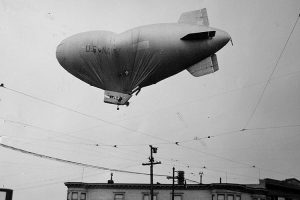 The crewless Ghost Blimp sags as it floats over San Francisco.

A little over two hours later Airship L-8 appeared off the coast of Ocean Beach, near Golden Gate Park. It came in low and touched down on the beach, where two fishermen grabbed its tie lines and tried to hold it there. Though unable to do so, they managed to look inside the gondola before it went up again.

The two-man crew was no longer inside.

L-8 continued its unmanned journey, first banging into a hill and sustaining damage. Some of its helium gas was released, causing it to sag as it drifted over San Francisco, where many folks observed its passing. As it lost altitude it began scraping telephone poles and rooftops of houses. It finally crashed on a residential street in Daly City.

Subsequent searches on land and at sea for Cody and Adams turned up nothing. L-8’s life raft and its three parachutes remained on board, and its radio still functioned. What would have made these men bail out? Both of them were declared dead in 1943, case closed. 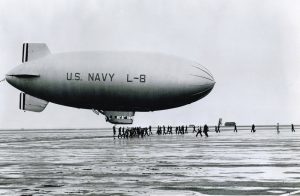 Remember the Goodyear blimp America, flying over football games and other events? That was L-8, which the Navy sold back to the tire company. Goodyear retired L-8 in 1982. It is now on display at a museum in Pensacola, FL.

But the mystery of the Ghost Blimp remains unsolved to this day. Theories abound: the crewmen were either captured by a Japanese submarine or were spies and went willingly. Some said they constituted two-thirds of a love triangle. Others believe one of them fell into the water and the other tried to save him. And, of course—I’m not making this up—there was the likelihood that the men were abducted by aliens.

Undoubtedly we will not put closure to what happened to the crew of Airship L-8.