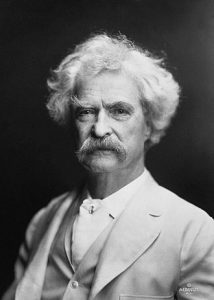 Samuel Langhorne Clemens (1835-1910), known by his pen name of Mark Twain, is considered this country’s greatest humorist. William Faulkner even went as far as calling him “the father of American literature.” Here are some more of his best and most meaningful quotes.

“Never argue with stupid people, they will drag you down to their level and then beat you with experience.”

“A ‘classic’ is a book that people praise and don’t read.”

“Clothes make the man. Naked people have little or no influence on society.”

“If you tell the truth, you don’t have to remember anything.”

“Never put off till tomorrow what may be done the day after tomorrow as well.” 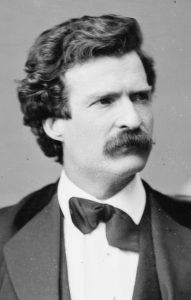 “A clear conscience is the sure sign of a bad memory.”

“Give every day the chance to become the most beautiful day of your life.”

“All good things arrive to them that wait…and don’t die in the meantime.”

“I have never let my schooling interfere with my education.”

“Sanity and happiness are an impossible combination.”

“God created war so that Americans would learn geography.”

“Books are for people who wish they were somewhere else.”

“Never have a battle of wits with an unarmed person.”

“If man could be crossed with a cat, it would improve the man but deteriorate the cat.”

I’ll end this post with my favorite Mark Twain quote, one that I’ve presented more than once before and drilled into the heads of all the writers with whom I’ve worked: “Substitute ‘damn’ every time you’re inclined to write ‘very.’ Your editor will delete it and the writing will be just as it should be.”