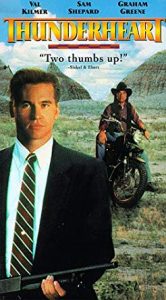 The 1992 film, Thunderheart, has been described as a “contemporary western mystery,” but it is so much more than that. It is “loosely based” on what is known as the Wounded Knee incident, which occurred in 1973, and other instances of Native American resistance, such as the occupation of Alcatraz Island (1969-1971).

During the 1973 incident the small South Dakota town of Wounded Knee, located on the Pine Ridge Indian Reservation, was occupied by about 200 Oglala Sioux, led by followers of AIM (American Indian Movement). The protest had to do with the failure of the Oglala Sioux Civil Rights Organization to impeach their tribal president, whom they accused of corruption, as well as the U.S. government in general for its failure to fulfill its treaty obligations to all Native American people. The two-month siege, covered extensively by the media, brought to the forefront the plight of Indians everywhere, though ultimately it caused a violent rift among the Oglala Sioux. (Learn more about the Wounded Knee incident here.) 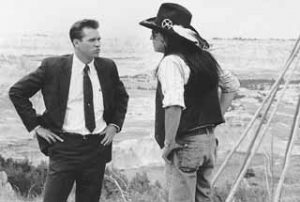 Rather than present a synopsis of Thunderheart, I offer a brief overview of this excellent, multi-layered story. FBI agent Ray Levoi (Val Kilmer) is sent to the fictional Bear Creek Reservation in South Dakota to investigate the murder of a tribal council member. Ray, whose father was a full-blooded Oglala Sioux, has long denied his heritage. He is to assist a senior agent, Frank “Cooch” Coutelle (Sam Shepard), who has been working with the tribal council president to apprehend a prime suspect, a radical member of ARM (Aboriginal Rights Movement).

From the outset Ray is ridiculed by the Indians in general, and reservation cop Walter Crow Horse (the always excellent Graham Greene) in particular, for being a “Washington Redskin.” But despite his seeming contempt for the locals, Ray is recognized as someone special by a tribal elder, Grandpa Sam Reaches (an amazing performance by Ted Thin Elk, a real tribal elder). He believes Ray to be the reincarnation of a Sioux warrior named Thunderheart, who died at the Wounded Knee Massacre of 1890. Ray thinks that this is all a crock, until he begins to have visions of the past… 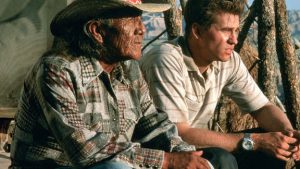 Ultimately, Ray will become sensitized to the ongoing problems of the Native Americans as he grows more aware of his heritage. With regard to the murder investigation, he will sniff out a potential conspiracy—perhaps even a cover-up—involving a government-sponsored plot to strip mine the reservation for uranium. Can Cooch, his partner, possibly be one of the co-conspirators? Unthinkable…

Thunderheart received excellent reviews, quite deservedly. The film resonates to this day, nearly thirty years later, as the problems of the First Americans seem no different than before. If you haven’t seen this fine film in a while, check it out.