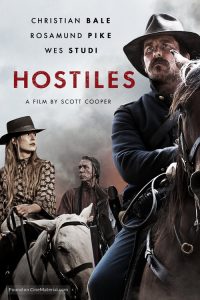 The 2017 Western drama, Hostiles, will take most viewers out of their “comfort zone.” At times it is difficult to watch, but its overall message of tolerance and inclusion is evident. The excellent performances by its stars, Christian Bale, Rosamund Pike, and Wes Studi, make this an exceptional and necessary film.

Even prior to viewing Hostiles, I knew that it was a must-see for a couple of reasons. First, it was praised by the National Congress of American Indians for its “authentic representation of Native Peoples and accurate rendition of Native American languages.” And second, the fine Native American actor, Wes Studi, has been one of my favorites for a long time, and he did not disappoint.

With that tagline (and no spoiler alert), the film opens in 1892 with the isolated Quaid family, settlers on the frontier. By this time the Indian Wars are all but over, with most of the defeated tribes on reservations. A small band of Comanches attack the family, killing and scalping the husband and shooting the two older children. Wife Rosalee (Pike) manages to escape into the forest, but the baby that she holds in her arms is also dead. 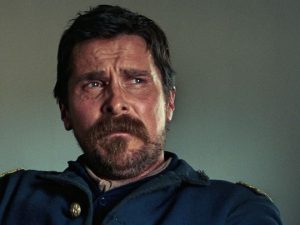 Blocker is not pleased about his final assignment.

At Fort Berringer in New Mexico, Captain Joseph Blocker (Bale) has just brought in a small family of Apaches. Blocker is a brutal man who hates Indians and has killed many of them over the years. He is up for retirement, but his final orders come in the form of a directive from the president himself: he is to escort a dying Cheyenne war chief, Yellow Hawk (Studi), and his family back to their tribal land in Montana. They have been imprisoned at the fort for years, but in his younger days Yellow Hawk was one of the most feared Indians and a personal nemesis to Blocker, having killed some of the soldier’s friends.

No way, Blocker tells his CO. But when a court marshal and loss of his pension is brought up, he reluctantly agrees to obey the order. He selects a small band of soldiers to accompany them, including his long-time aide and friend, Sgt. Metz. 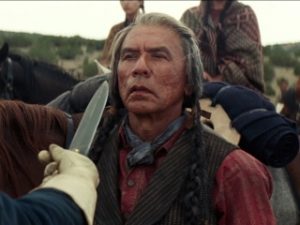 Blocker would just as soon be done with Yellow Hawk.

Yellow Hawk’s family consists of his daughter, Living Woman, son Black Hawk (Adam Beach), the latter’s wife, Elk Woman, and the couple’s young son, Little Bear. Shortly after leaving the fort, the vindictive Blocker has the two men unnecessarily chained. They continue on, eventually coming across the charred ruins of the Quaid cabin. In a heart-wrenching scene they find Rosalee inside, singing to her “sleeping” children. They take her out to join their group, but she is at first terrified at the sight of the Cheyenne. She also attempts to bury her children by digging graves with her hands but finally allows the men to help her. Eventually she will warm to the Indians when one of the women offers her clean clothes to replace her bloody rags.

The next day the group is attacked by the same Comanche party that slaughtered Rosalee’s family. One soldier is killed, another wounded, but they manage to kill some of the Indians. In another powerful scene, Rosalee fires multiple shots into one of the dead Comanches, continuing to pull the trigger long after there are no more bullets.

Yellow Hawk petitions Blocker to unchain him and Black Hawk, as they are skilled in fighting the Comanches, but the officer refuses them. The next day they come across the dead bodies of the Comanches. It is presumed that Metz released them during the night so that they could leave the camp and carry out the raid.

The party makes a brief stop at Fort Winslow in Colorado to drop off Rosalee and their wounded soldier. Blocker is asked to add Sgt. Charles Wills (Ben Foster) to his group. The disgraced soldier murdered a family with an axe and is scheduled to be court-marshaled and hung at a post along the way to Montana. Rosalee decides to continue on with the group rather than wait many months for a supply train to arrive at the isolated fort. 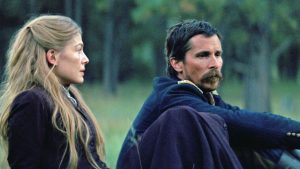 Rosalee senses something in Blocker that he doesn’t even see in himself.

One night, after a meal, the three women are washing dishes in a nearby stream when they are abducted by some fur traders. As Blocker makes ready to hunt them down, Yellow Hawk asks the officer to remove the chains from him and his son so that they can help track the traders. Blocker does this reluctantly. They find the camp, kill the traders and save the women but lose another trooper. Blocker, as a show of respect, does not put the chains back on the two warriors.

During a rainstorm Rosalee shares her tent with Blocker. That same night the glib Wills talks one of the soldiers into undoing his chains. Wills murders the soldier and flees but is wounded by Blocker. Sgt. Metz pursues Wills, and the two men are both found the next day. Metz shot Wills dead and then took his own life, the result of severe depression. 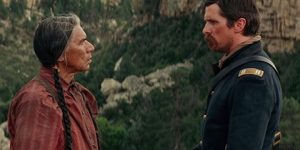 Yellow Hawk’s health has deteriorated all along the trail, and now, as they reach his tribal land in Montana, it is evident that he does not have long to live. As promised, I’ll stop here and not give away any of the remaining scenes, which would be unfair. Suffice to say that the journey has had a profound effect on the hearts and minds of both whites and Indians.

Hostiles is powerful, intelligent storytelling that, sadly, underperformed at the box office. While I’m a sucker for an entertaining superhero movie, I wish they made more films like this gem, which will remain in your thoughts long after you’ve seen it.