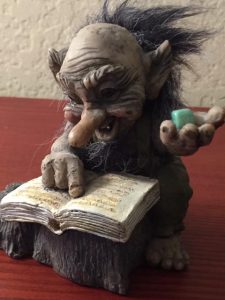 When my bride and I returned from an amazing trip to Iceland over a decade ago, we brought home the studious troll you see pictured here. Icelanders love their trolls (and elves, too) and are happy to point some of them out to visitors—the ones that have been turned to stone, of course. More on that shortly.

THE MOTHER OF TROLLS

Unlike our book-loving troll, most are not the sharpest pencils in the box. They have short fuses, and when provoked they are apt to put curses on people. They have a reputation for being mean and doing nasty things to folks. And the meanest of the lot is Gryla, the mother of the 13 Yule Lads. According to Icelandic folklore, Gryla—also known as the Christmas Witch—just loves to chow down on children. Parents of unruly or hyperactive kids are not above threatening them with tales of Gryla, a surefire way of getting the little buggers to go to sleep. 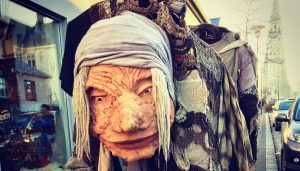 The Yule Lads are more mischievous than carnivorous. They appear during the Christmas season to play pranks that usually involve scaring the crap out of people. They’re also known to reward well-behaved kiddies with treats. But it behooves children to be on their best behavior, since the Yule Lads’ nasty mom is often around, and always hungry.

DOWN FROM THE MOUNTAINS

Remember the scene in The Hobbit when Bilbo, Gandalf, and the dwarves stop to rest one night and are confronted by three mountain trolls? Sticking to the Scandinavian legend, Tolkien had them tricked into staying outdoors past sunrise, and they were turned to stone when exposed to the sun.

The trolls of Reynisfjara Beach.

Iceland has a great deal of mountainous terrain, including craggy outcroppings and fields of lava, as well as high, remote mountains. These are the landscapes in which the trolls thrive. The primary reason they come down from the mountains is to search for food. Oftentimes they wander too far from any shelter and are turned to stone. You can see them all over the island. As I said before, they are not too bright.

Perhaps the most famous of Iceland’s trolls are located off Reynisfjara Beach, a black sand beach in the southeast part of the island. Legend has it that three trolls were hard at work trying to drag a sailing ship into the bay. They lost track of time; the sun came up, and that was all she wrote. 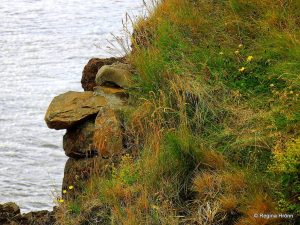 This troll had bad timing.

Iceland is a fascinating country that, sadly, is more prone to the forces of time and nature than most. On our trip I recall looking down a rift in the ground and watching lava flowing. Kind of scary. If you’ve never been there, I highly recommend a trip—once this freaking pandemic is history. And if you do go, give our regards to the trolls!