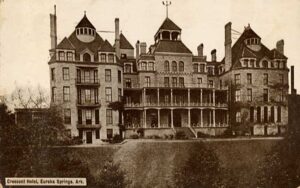 What? The MOST haunted? That is what the Crescent Hotel in Eureka Springs, Arkansas perceives itself to be. And whether we believe it or not, there is an extensive history of paranormal activity at this venerable building.

HAUNTS OF THE RICH AND FAMOUS…AND TERMINALLY ILL

The hotel opened as a resort in 1886, catering to an elite clientele who came there to partake of a nearby natural spring whose water supposedly had curative powers. This proved not to be the case, and by the turn of the century the Crescent was all but abandoned.

In the early 20th century the Crescent was utilized as a college for women, and later on a junior college, the latter of brief duration. As before, the maintenance for this building proved too prohibitive, and there were periods when it was shut down. In 1937 a wealthy media personality and all-around charlatan named Norman Baker opened up the Baker Hospital, calling it a cancer hospital and health resort, and himself a doctor. He promised a miracle cure that would send patients home cancer free, no invasive surgery, no tests. The cure? The same water from the spring that had no curative powers, among other bogus “medicine.”

Baker had pulled a similar scam in Iowa and had even served time for practicing medicine without a license. After his release he simply uprooted the con job and moved it to Arkansas. Before being arrested in 1939 and going back to prison he had cheated cancer patients out of an estimated $4 million. Many folks died in that building when they could have been seeking out more effective treatment methods.

The building was shut down again during the war years, but over time different owners saw to a number of renovations that restored the old building to its original glory. Today the Crescent Hotel is one of the most visited hotels in the South. And some of that has to do with its many ghosts.

MEET THE GHOSTS OF THE CRESCENT HOTEL 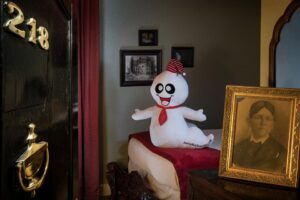 With a number of eras to draw from, the spirits that haunt the hotel are quite diverse. “Michael” is a stonemason who apparently fell off the roof in 1885 and died. The area where he fell became room 218, the most haunted room in the hotel. Michael pounds on walls, thrusts his hands out of a mirror (yikes!), and in general makes a nuisance of himself. A terrified guest even reported seeing blood on the walls. (Shades of the Overlook Hotel!)

During the hotel’s days as a women’s college a young woman either jumped or fell to her death from a window. Patrons hear her screams as she plummets to the ground.

As you would guess, many of the Crescent Hotel’s apparitions linger from the time of the Baker Hospital. The deaths of those who perished while expecting to be cured could not have been pleasant. Among the spirits is a nurse pushing a gurney along a hallway. These sightings usually occur late at night, the time when staff rolled the corpses of the newly deceased out of the building. One of the cancer patients, “Theodora,” introduces herself to staff in room 419 before fading from sight. 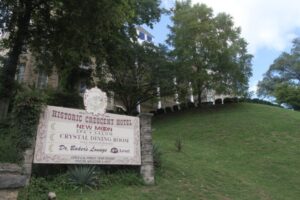 The spirit of good old “Doctor” Baker himself has often been seen in the basement where he scammed so many of his patients. Those who have encountered him swear that the apparition looks exactly like an old photo of the quack. And for the longest time the hotel switchboard received phone calls from the empty basement. (Gawd!) They finally shut the old switchboard down.

The list of paranormal activity at the Crescent Hotel goes on and on. (And yes, they offer a “ghost tour.”) If you head there, check out the Crystal Dining Room, where a lot of that activity is said to take place. And you might ask about a purported portal to—gasp!—the “Other Side.”

Who knows, the Crescent Hotel just might be America’s most haunted hotel. Check out their website at Historic Hotels of America.