Is It Still The Victorian Era For Women? 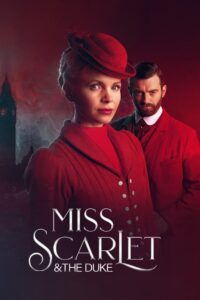 My bride and I just finished viewing the three seasons (with a fourth on the way) of the PBS Masterpiece mystery series, Miss Scarlet and the Duke, which we enjoyed. The stories are set in 1882 London, not the era in which you’d expect to find a strong-willed, independent woman like its main character, Eliza Scarlet (Kate Phillips). Indeed, the women’s Suffrage movement in England was barely embryonic in the late nineteenth century. Eliza’s determination to succeed in a man’s world is what made the series a hit in our eyes.

DOES IT EVER CHANGE?

Before offering a brief overview of the series, I have to say this: we watch many shows (mostly mysteries) from all around the English-speaking world. The one constant: whether the series is set in nineteenth century London, or early twentieth century Canada, or anywhere else in England, or Australia, or New Zealand in the 1950s, or 1970s, or 1990s, or 2000s, or 2023, women are always in a battle for their place in the mulish patriarchy that would just as soon see them remain the “Goodwives” of the seventeenth century. It is rather pathetic.

Eliza Scarlet has learned a lot from her open-minded father, Henry, a former officer at Scotland Yard who has operated his one-man detective agency for years. She is a whiz at deduction, as skilled as Dad, but what good will that do her? After all, she’s a woman. 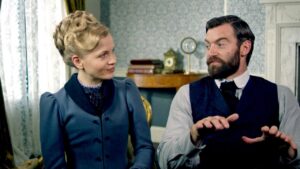 When Henry dies suddenly, Eliza is bereft—and also poor. (He was murdered, a case she will tackle later in the series.) Her housekeeper and surrogate mother, Ivy, says that her only option is to find a husband that will support her. The heck with that, says Eliza, and she takes over his agency. Her only concession to the patriarchy is to leave his name on the office door, at least till she makes a name for herself. Not easy, she learns. People are either shocked or disgusted to meet a lady detective. But she perseveres.

The “Duke” of the title is her childhood friend, William Wellington (Stuart Martin), now an inspector at Scotland Yard and a protégé of Henry Scarlet. (You can figure out why his fellow officers nicknamed him Duke.) Eliza calls on him often for his help in acquiring cases. She also pilfers case files from his office, and in general drives him crazy. 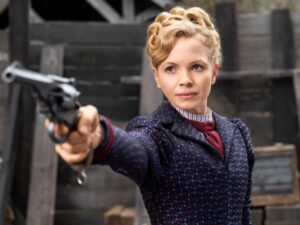 You do not want to mess with Eliza Scarlet!

They do, however, care a lot about each other. Their flirting and byplay bring to mind the relationship of Temperance Brennan and Seeley Booth in Bones, making for a fun subplot.

I won’t say much more, only that it is quite a fascinating trip that Eliza Scarlet takes as she navigates this stuffy World of Men to achieve her success. Watching the entertaining Miss Scarlet and the Duke, I felt glad to be along for the ride.