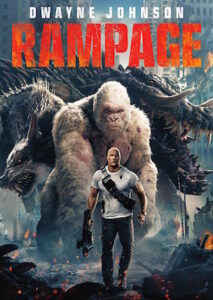 A gorilla, a wolf, and an alligator walk into a bar. Wait, let me rephrase that. A giant gorilla, a giant wolf, and a giant alligator walk (actually, run and swim) into Chicago. Sounds weird, but if you know what it means, you probably saw the Dwayne Johnson-fueled sci-fi/action/monster film, Rampage.

The Rock plays Davis Okoye, a primatologist at the fictional San Diego Wildlife Sanctuary. His main charge is an albino gorilla named George, whom he raised after saving it from poachers that had killed its family. Some of his early interactions with the gentle creature are downright hilarious.

Siblings Claire and Brett Wyden, a nasty pair (Claire is nastier), run a gene-manipulation company called Energyne and are developing a pathogen for use as a biological weapon, the goal to make humans larger and more aggressive…perfect killing machines. It is being tested on a space station, where a lab rat had grown huge and killed all but one of the crew. This woman manages to leave in an escape pod with the pathogen samples, but when the pod disintegrates upon re-entry, the samples are scattered across the U.S. One lands in a Wyoming forest, where a wolf is exposed, a second in the Everglades, where it is swallowed by an alligator. The third? Yep, in poor George’s enclosure. 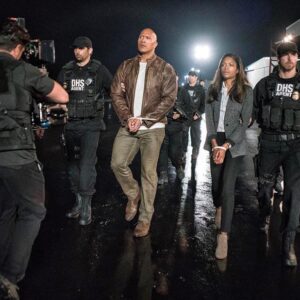 Davis and Kate are taken into custody.

The next morning Davis discovers that the disoriented George has grown to enormous size and has killed a grizzly bear. As he struggles to understand what is going on, Davis is joined by genetic engineer Kate Caldwell (Naomie Harris), who had once been employed by Energyne. She had worked on the pathogen with the Wydens, believing it to be a potential cure for numerous diseases. When she learned what they were really doing and tried to expose the Wydens she was falsely incarcerated, leaving her unable to help her terminally ill brother, who soon died. She hates the Wydens and wants to help.

George briefly goes ape (sorry), but after Davis calms him down a government team, led by agent Harvey Russell (an entertaining Jeffrey Dean Morgan), shows up and drugs the creature. Davis and Kate are arrested, and along with George they are put on a plane to be taken…somewhere. The Wydens, meanwhile, send a bad-ass mercenary team after the wolf, and they watch from afar as the entire team is destroyed by the monstrous creature. 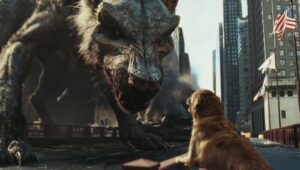 Recognizing the need for a coverup, and still hoping to retrieve the pathogen, Claire initiates a shocking Plan B. She has engineered a huge transmitter atop the Sears Tower that will cause the creatures to react aggressively to a radio frequency and converge on Chicago to make it stop, human casualties be damned. (Told you she was nasty.) She turns it on, which causes the drugged George to awaken on the plane. Davis manages to save Kate and Russell, but the plane crashes and George is off to join the wolf, while the alligator makes like a torpedo through various waterways to reach the Windy City. So who could put a stop to this pending disaster? Well, who do you think! Davis is in some deep shit, ya think?

I’ll stop here, but be assured that there is plenty more to come. I enjoy most of Dwayne Johnson’s films, and Rampage had me at the giant rat on the space station, which shows up in the first few minutes. As far as calling this a Guilty Pleasure…well, it was borderline. It barely broke even at the box office, and its reviews were just about fifty-fifty…in other words, meh. Supposedly a sequel is in development. I hope so…but I won’t hold my breath.