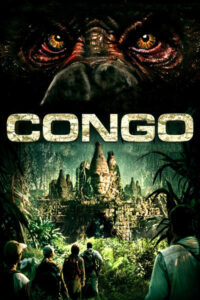 You’d think that any movie based on a popular Michael Crichton novel would be a major hit. But the 1995 action/adventure film, Congo—while it did kind of okay at the box office—suffered the vitriol of critics, and its Razzie nominations were numerous. Even so, I love this film, “deadly laser guns” and “mutant killer apes” and “talking gorillas” and “marauding hippos” and all.

WHERE YOU ARE THE ENDANGERED SPECIES

With that tagline, here is a brief overview. The asshole CEO of communications giant TraviCom, R.B. Travis (Joe Don Baker), sends a team, including his son Charles, into the Congo jungle to find a rare blue diamond, which could revolutionize his laser-based industry. As Travis and employee Karen Ross (Laura Linney) observe Charles’ camp from their headquarters on a remote feed, they see a lot of dead bodies. They also watch as a savage ape-like creature destroys the camera.

Karen, formerly a CIA operative, heads for the Congo by attaching herself to an expedition headed by Professor Peter Elliott (Dylan Walsh), a primatologist at Cal Berkeley. Peter has taught a mountain gorilla named Amy how to talk but now feels an obligation to return her to the Congo, where she was born. Also joining the group is alleged philanthropist Herkermer Homolka (Tim Curry), who is actually a penniless dipshit. He had seen many of Amy’s drawings of the Eye of Providence, and he believes that she knows the location of the lost city of Zinj, site of the fabled diamond mines of King Solomon. 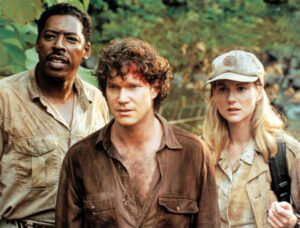 Monroe, Peter, and Karen are concerned about what lies ahead in the jungle.

WHO YOU GONNA CALL?

In Uganda the group meets its guide, Monroe Kelly (Ernie Hudson; yeah, a Ghostbuster!), who leads them through a shooting gallery of angry militia guys in the unending civil wars of these Third World central African countries. They board another plane in Tanzania hoping to reach Zaire, their ultimate goal. Soldiers fire at the plane as it crosses the border, eventually blowing it up, but the group parachutes safely into the jungle, equipment, talking gorilla, and all. (I’m not making this up.)

From there all of the “fun” begins, including the aforementioned attack by enormous hippos as they travel by boat down a river, which kills some of the expendable porters. (Think those red-shirted crewmen on the away team in Star Trek.) They’ll find the ruined camp, as well as—gasp!—the nearby lost city of Zinj, chock full of diamonds but guarded by dozens of seriously nasty mutant killer apes. Oh, and did I mention all of this occurs in the shadow of an active volcano, which is about ready to blow its top? 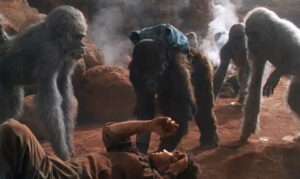 Yes indeed, Congo is way over the top, but what’s wrong with a little pure escapism? Fie on those nasty critics! I’ll be watching this entertaining film many more times before the Mother Ship comes for me.