Ghostly Legends Of The Whaley House

There are some human beings who are dimly aware of their own deaths, yet have chosen to stay on in what used to be their homes, to be close to surroundings they once held dear. – Hans Holzer

Few houses in San Diego are as historically important as the Whaley House. In addition to being the Whaley Family home, it housed a granary, the County Court House, San Diego’s first commercial theater, various businesses including Thomas Whaley’s own general store, a ballroom, a billiard hall, school, and polling place. Significant events, such as the seizure of the court documents and records in 1871, and the suicide of Violet Whaley in 1885 profoundly affected Thomas and Anna Whaley. These events, as well as the hangings which occurred on the property before the house was constructed, have suffused the Whaley House with an air of mystery and added to its reputation as something more than just California State Historic Landmark #65. 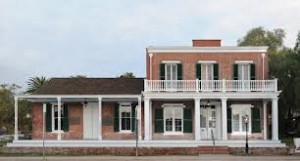 According to the Travel Channel’s America’s Most Haunted, the house is the number one most haunted house in the United States. The alleged hauntings of the Whaley House have been reported on numerous other television programs and been written up in countless publications and books since the house first opened as a museum in 1960. Although we cannot state positively that the Whaley House is really haunted, the voluminous documentation of paranormal occurrences at the site makes a compelling case. But, if there are ghosts at the Whaley House, who are they and why are they here?

The earliest documented ghost at the Whaley House is “Yankee Jim.” James (aka Santiago) Robinson was convicted of attempted grand larceny in San Diego in 1852, and hanged on a gallows off the back of a wagon on the site where the house now stands. The local newspaper reported that he “kept his feet in the wagon as long as possible, but was finally pulled off. He swung back and forth like a pendulum until he strangled to death.” Although Thomas Whaley had been a spectator at the execution, he did not let it dissuade him from buying the property a few years later and building a home for his family there. According to the San Diego Union, “soon after the couple and their children moved in, heavy footsteps were heard moving about the house. Whaley described them as sounding as though they were made by the boots of a large man. Finally he came to the conclusion that these unexplained footfalls were made by Yankee Jim Robinson.” Another source states that Lillian Whaley, the Whaleys’ youngest daughter who lived in the house until 1953, “had been convinced the ghost of “Yankee Jim” haunted the Old House.” A visitor to the museum in 1962 mentioned that “the ghost had driven her family from their visit there more than 60 years [earlier], her mother was unnerved by the phantom walking noise and the strange way the windows unlatched and flew up.” 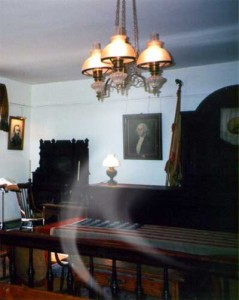 A “welcoming” room at the Whaley House.

Many visitors to the house have reported encountering Thomas Whaley himself. The late June Reading, former curator of the museum, said, “We had a little girl perhaps 5 or 6 years old who waved to a man she said was standing in the parlor. We couldn’t see him. But often children’s sensitivity is greater than an adult’s.” However, many adults have reported seeing the apparition of Mr. Whaley, usually on the upper landing. One said he was “clad in frock coat and pantaloons, the face turned away from her, so she could not make it out. Suddenly it faded away.”

The specter of Anna Whaley has also been reported, usually in the downstairs rooms or in the garden. In 1964, Mrs. Whaley’s floating, drifting spirit appeared to [television personality Regis] Philbin. “All of a sudden I noticed something on the wall,” Philbin reported. “There was something filmy white, it looked like an apparition of some kind, I got so excited I couldn’t restrain myself! I flipped on the [flash]light and nothing was there but a portrait of Anna Whaley, the long-dead mistress of the house.”

Other visitors have described seeing or sensing the presence of a woman in the courtroom. “I see a small figure of a woman,” one visitor said, “who has a swarthy complexion. She is wearing a long full skirt, reaching to the floor. The skirt appears to be a calico or gingham, small print. She has a kind of cap on her head, dark hair and eyes and she is wearing gold hoops in her pierced ears. She seems to stay in 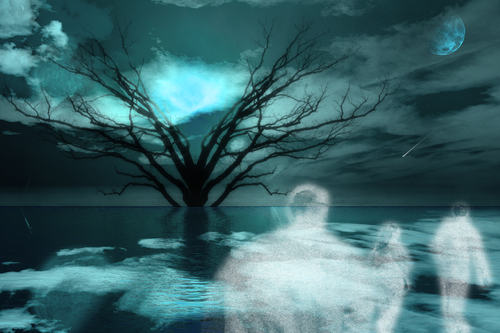 this room, lives here, I gather.” None of the Whaleys fit this description, but the house was rented out to numerous tenants over the years. Perhaps the mysterious woman in the courtroom was one of these.

Another presence reported by visitors and docents is that of a young girl, who is usually found in the dining room. Psychic Sybil Leek encountered this spirit during a visit in the 1960s. “It was a long-haired girl,” Sybil said. “She was very quick, you know, in a longish dress. She went to the table in this room and I went to the chair.” Urban legend has it that this is the ghost of a playmate of the Whaley children who accidentally broke her neck on a low-hanging clothesline in the backyard, and whose name was either Annabel or Carrie Washburn. There are no historic records of any child dying this way at the Whaley House; nor is there record of any family named Washburn residing in San Diego at the time. It is believed that the legend was started by a one-time employee of the Whaley House, in an effort to add to the house’s mystique.

Even animals aren’t left out of the singular occurrences. A parapsychologist reported he saw a spotted dog, like a fox terrier, that ran down the hall with his ears flapping and into the dining room. The dog, he said, was an apparition. When they lived in the house, the Whaleys owned a terrier named Dolly Varden.

The Whaley House stands silently watching over San Diego Avenue as it has done for a century and a half. Every day visitors come from around the world to tour the historic museum. It contains so much history within its walls, that even the non-believer will enjoy the tour. For believers and skeptics alike, the house draws them back time and again, in search of those elusive ghosts. As Regis Philbin once said, “You know a lot of people pooh-pooh it because they can’t see it. But there was something going on in that house.”

Copyright ©2012 SOHOSanDiego.org. All rights reserved. Reprinted with permission from Save Our Heritage Organisation (SOHO).

with a dark force that will cost them their souls. A century and a half later, at a writers’ retreat now occupying the site, that debt has not yet been repaid…

One reviewer wrote: “Sirota expertly weaves historical fact with fiction in such a way that almost made me wonder if spirits of long dead Native Americans still roam the Sierras wreaking vengeance for past wrongs. The setting is beautiful and tranquil, yet the story is filled with tension and suspense that builds with a premonition of evil that echoes ghostly screams from long ago.” Enjoy!