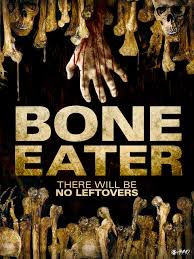 The 2008 made-for-TV (SyFy Channel) horror/sci-fi film, Bone Eater, which appears on many “Worst” lists, is notable for one thing. Its cast consists of a bunch of long-in-tooth actors that we knew from long-ago television shows. I guess it’s good to know that they’re still picking up a paycheck.

Bone Eater’s lead character is played by Bruce Boxleitner, who starred in Scarecrow and Mrs. King, Babylon 5, How the West Was Won, and who appeared in a gazillion other TV shows. Lesser roles (none longer than two-three minutes of screen time) highlighted Walter Koenig (Chekov on the original Star Trek!), William Katt (The Greatest American Hero), Victoria Hamel (Hill Street Blues), and Gil Gerard (Buck Rogers in the 25th Century). If not a “Who’s Who”, then definitely a “Who Was.”

THERE WILL BE NO LEFTOVERS 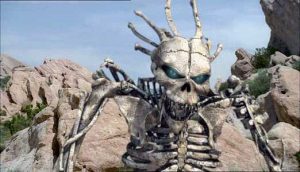 The Bone Eater is unleashed!

With that tagline—which I did not make up—here is a quick overview of this unintentionally hilarious film, which I assure you was not played for laughs. Somewhere in the desert Southwest a greedy developer is trying to build a resort on land adjacent to the (fictional) Katonah tribe’s reservation. But the tribe, knowing that an ancient evil was buried there long ago, is protesting the project. When a construction crew unearths an odd relic—a sort of giant tomahawk—its removal sets free the Bone Eater, which looks like Skeletor with a pissed-off face. There is no buildup to the terror—we see the creature in the film’s first few minutes as it breathes a green mist on the crew, disintegrating them all.

Sheriff Steve Evans (Boxleitner) is caught in the middle of the battle between the tribe and the developer. Being half Caucasian and half Katonah, this is hard on him. But of greater concern is the Bone Eater trudging along and disintegrating everyone in sight, including an archaeology class from a nearby college. It also kills one of three surveyors, while the other two try to escape on motorcycles. That’s when the Bone Eater takes up the pursuit atop a white stallion made of smoke! I thought that I would wet my pants on that scene. (It caught up to them, by the way.) 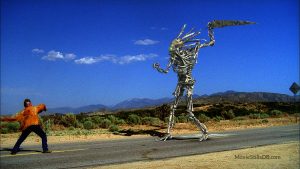 Sheriff Evans faces off with the Bone Eater.

Anyway, with a whole lot of chintzy special effects, and a plethora of cringe-worthy dialogue—and many “hey, I know who that is!” moments—Bone Eater approaches a climax that will pit Sheriff Evans, war paint and all, against the ancient evil that is threatening his town. For me, sometimes bad is good, and I guess there are worse ways to spend 88 minutes.