A Journey Across Time To Save An Empire

A reader in the UK, one of my 17 international fans, 😊 recently wrote me to say that his old copies of my Sword & Sorcery novels, Berbora and Flight From Berbora, had disintegrated and blown away on a slight breeze. I advised him that I had rewritten and reissued those two gems as The Sword of Tyron and The Quest of Tyron, which pleased him no end. He ordered them in eBook format, making future disintegration problematic.

The story focuses on a barbarian mountain man named Tyron who becomes obsessed with tales told of Berbora, the splendid capital city of an empire that perished a thousand years before his time. He undertakes a long and dangerous journey in order to walk amid the ruins of Berbora. There, he meets an old man named Zathras, a descendant of the magicians that once frequented the city. He tells Tyron that Berbora did not succumb to enemies, but rather to a Great Plague that befell the city. He also advises the incredulous young man that, by utilizing the power of an enigmatic altar called the Stone of Vorhashekkh, he can send Tyron across time in an effort to prevent Berbora’s downfall. 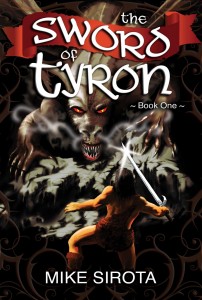 Well of course, Tyron’s first reaction is that this old duffer is a few wineskins short of a six-pack. He also thinks, “Oh, if only it were true.” So Zathras proposes that he first utilize the Stone of Vorhashekkh to give Tyron a “sneak peek” at the past. Tyron agrees, and he lies down on the altar. Here is the scene.

Waves of tingling energy permeated Tyron’s body as he lay down on the stone. Whether this emanated from the stone or from his own excitement he could not tell. Zathras stood on his left, both palms pressed flat on the stone near Tyron’s arm. To the west the sun had dropped farther behind the mountains, but as he stared in that direction Tyron suddenly understood what the old magician had meant. There was a rift in the mountains, one so narrow that he had not noticed it before, even though he had looked that way a number of times. The sun, which had disappeared minutes before, could now be seen through the fissure. A thin, concentrated beam of light poured down from the peaks into the stone below Tyron. The stone vibrated with the increased energy, causing Tyron’s body to shake uncontrollably. Zathras, close at hand, was suddenly gone, nor could Tyron see the gray sky above him. For an instant he imagined that he had gone blind. He wanted to leap to his feet and scream, but he remained motionless. Fearful, he shut his eyes tightly.

Seconds later the vibrations abated. Tyron slowly opened his eyes, and as light entered them he knew that his fears had been unfounded. The living stone beneath him was clearly visible, but all else that surrounded him was a blur. He wanted to rub his eyes, but he remembered Zathras’ warning. It was as though he were looking through layer upon layer of fine silk. He raised his head slightly and focused through the haze until his surroundings became clearer to him. He was still in the courtyard of the Palace of Gold, but this time no rubble littered the streets. The golden towers rose high in the air, and on the many steps leading to the palace’s great door he discerned men and women climbing up and down. There were soldiers, warriors with heavy leather hauberks and glittering swords. There were women, beautiful, golden haired women in flowing gowns of white and yellow. As they ran happily through the courtyard, one appeared to wave at Tyron. He called to her, but she did not hear him. She had merely been waving to another across the yard. 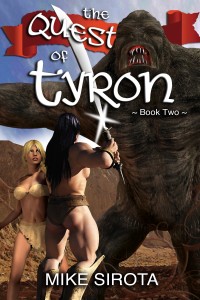 All about him the scene was one of joyfulness, of adventure. Tyron wanted to leap from the stone and pursue the lovely maidens. He wished to match arms in rough sport with the soldiers. He now believed that Zathras could accomplish what he said he could. Yes, Tyron was certain that the Berbora of the past was his. A decision had to be made, and quickly. By just getting to his feet he was positive that he could remain here. Did he wish to do that now, or should he wait until the next day? He could not be certain that it was the right thing to do, for Zathras had not told him so. Perhaps it would be best to return this time—

The golden towers suddenly vanished, and all about him the people seemed to shimmer as they faded slowly. It had ended! He was going to rejoin Zathras. In an instant he made up his mind: he would stay. With all his strength he willed himself to his feet, but his efforts were in vain, for he could not move. His exertions forced his head to the stone, where for a moment he blacked out. It was the increasing and decreasing vibrations of the Stone of Vorhashekkh that helped clear his head. He saw the concerned Zathras standing over him. The ruins of the Palace of Gold stood before him. The old magician helped Tyron up. He sat on the edge of the now silent stone, his head throbbing. 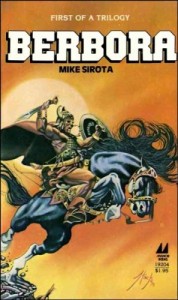 The original cover of Book One.

“I had great difficulty in bringing you back!” the angry Zathras shouted. “You tried to get up, didn’t you? Why did you do it?”

“When I saw all that surrounded me I knew that I must stay,” the dazed Kalkh admitted. “You will be able to return me there, won’t you?”

Yes, Zathras will be able to send Tyron back, and therein lies an exciting adventure that I was thrilled to have a second chance at retelling. The Sword of Tyron and The Quest of Tyron are available in eBook and paperback at Amazon. Enjoy!