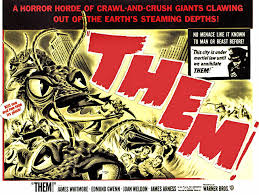 As a mere slip of a lad in the 1950s, I totally enjoyed (and had the crap scared out of me by) the numerous science fiction and horror movies spawned during that decade. Paranoia ruled in the ’50s, folks being worried about—in no particular order—the threat of communism; the fear of alien invasion (seriously); and the long-term effects of being thrust into the atomic age during the previous decade. Cautionary tales galore filled the silver screen, from The Day the Earth Stood Still to The Beast from 20,000 Fathoms to Invasion of the Body Snatchers to The Incredible Shrinking Man—and oh so many more.

BEST OF THE BEST

For me, at or near the top of the list is the 1954 gem, titled simply, Them! (Yes, the exclamation point is part of the title.) In addition to having one heck of a good, creepy story, Them! boasts what amounts to an all-star cast. This includes James Whitmore, a much-honored actor; James Arness, who in 1951 played the titular role in The Thing and went on to star in Gunsmoke for two decades; and Edmund Gwenn, a British actor who won an Oscar in 1947 for playing Santa Claus in Miracle on 34th Street. You’ll even see Fess Parker (pre-Davy Crockett) in a minor role, and—in an uncredited walk-on part—Leonard Nimoy! 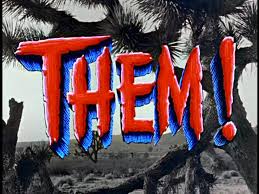 The only color in this black-and-white film was its title.

The story: New Mexico State cops Ben Peterson (Whitmore) and Ed Blackburn pick up a comatose little girl wandering in the desert. Soon after, they find an abandoned car and trailer, one side of the latter caved out. The girl had come from there. They also discover a large, unidentifiable print in the sand. As an ambulance makes ready to take the girl to a hospital they hear a weird, high-pitched sound from somewhere out in the desert, which quickly fades away.

The cops drive to an isolated general store and find the owner dead, one side of the building torn out, just like the house trailer. Peterson drives back to headquarters, leaving Blackburn behind. Gun drawn, Blackburn goes outside when he hears the same high-pitched sound as before. The sound grows louder; we hear gunshots, a scream…end of scene.

At headquarters, Peterson is taking his partner’s death hard. He still can’t talk to the little girl, who remains in shock. Maybe a homicidal maniac is the perpetrator, they think. By this time they’ve identified the car as belonging to an FBI agent who, with his wife and two kids, were on vacation. Now with a stake in this, the FBI sends agent Robert Graham (Arness) to assist. He forwards a cast of the print taken near the trailer to Washington, but the FBI, unable to identify it, sends it on to the Department of Agriculture. They are soon advised that “Drs. Medford” are flying to New Mexico, and to give them full cooperation.

When elderly and curmudgeonly Dr. Harold Medford (Gwenn) and his daughter Patricia (Joan Weldon) arrive, Peterson and Graham take them to see the little girl. The old man jolts her back to awareness by waving formic acid under her nose. (The general store owner’s body had been full of formic acid.) The terrified girl shrieks “Them! Them! Them!” and cowers in a corner. 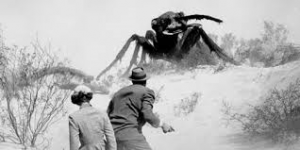 BEGINNING OF THE END?

Peterson and Graham take the Medfords to the site of the trailer attack, where they find more prints. The lawmen are growing impatient with the two myrmecologists (ant experts) withholding information about who or what is doing the abductions and killings. Before Medford can explain, Patricia goes off by herself and is confronted by a nine-foot ant. (Not bad effects for six decades ago.) The cops bring it down, and the Medfords say that their worst fears have been realized. These giant mutations are the result of atomic testing nine years earlier in that area. And they believe that there’s a heck of a lot more of them.

The next day, with the military providing two helicopters, they find a huge anthill in the desert, with skeletal remains of humans just outside. They pour cyanide gas into the tunnels, after which Peterson, Graham, and Patricia go down to make sure all are dead. A few still live, but the lawmen take them out. But, bad news—Patricia identifies the queen’s chamber and is certain that two queens have hatched and have flown away with their male consorts. Given their size, they could fly anywhere in the world.

WHERE HAVE THEY GONE? 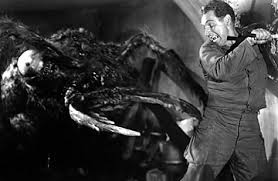 Peterson is not looking forward to what happens next…

The government is informed, and all odd occurrences are monitored. Eventually one of the pregnant queens (the consorts die after mating) climbs into the hold of a ship docked in Mexico and lays her eggs. They hatch when the ship is at sea, the ants killing nearly everyone aboard. The U.S. Navy sinks the ship. One queen down, one to go.

But, not so easy, as the second one turns up in—where else?—Los Angeles. Peterson and Graham interview a drunk named Jensen in a hospital ward. (One of the funniest scenes EVER, I kid you not.) Jensen has seen giant ants coming out of the storm drains in the dried-up riverbed that runs through L.A. At the same time a dead guy, badly mutilated, has turned up. According to his despondent wife, he took their two sons to the riverbed to fly their model airplane. The kids are still missing.

Martial law is declared in L.A., and the military pours in to explore the hundreds of miles of drains that run under the city. Peterson is the first to hear noises, and when he crawls through a pipe he sees the two boys being menaced by a bunch of ants. As Peterson helps the boys, everyone converges on this drain. He saves the kids but is killed by one of the big bugs. 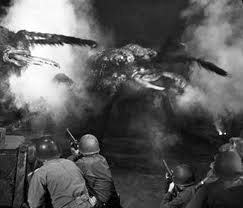 The desperate final battle against the giant ants.

Graham arrives with the military, and in a firefight they destroy the ants. The Medfords are then summoned, and they identify the queen’s chamber. They are certain that none of the new queens have taken flight. As the chamber is torched, old Dr. Medford delivers the cautionary last line of the film, a staple for similar films of the decade: “When Man entered the Atomic Age, he opened the door to a new world. What we may eventually find in that new world, nobody can predict.”

A couple of observations upon watching the much-honored Them! for the gazillionth time. First, aside from the actual confrontations with the ants, I don’t think there is a minute gone by that most or all of the actors in a scene aren’t lighting up cigarettes and puffing away. I guess this is true of most all movies from back then. Still, it’s rather disconcerting.

Second, women who appeared in these old genre movies screamed a lot, looked terrified a lot, fainted a lot—you get the picture. Not so Dr. Patricia Medford, capably played by Joan Weldon. Besides being highly educated and an expert in her field, she is on the front lines of danger throughout the film. (Okay, she screams once, when the first ant shows up a few yards away, but hell, so would I.) After they pour cyanide into the nest and prepare to go down, Patricia informs—not asks—Graham and Peterson that she’s going with them, given that she’s the expert and knows what to look for. When Graham pulls the standard chauvinistic “This is no place for a woman” crap, she tells him—in a nice way—what he can do with that. YOU GO, GIRL!

Do you have any favorite memories of Them!, or any other 1950s film? Please share them if you do.