I scored my first driver’s license as a teen in New York City, shortly after they invented the automobile. It listed my height at 5’10”, and it still says that today. Tell the truth, I don’t think I was ever actually 5’10”, but at 5’9¾” I guess that was close enough. 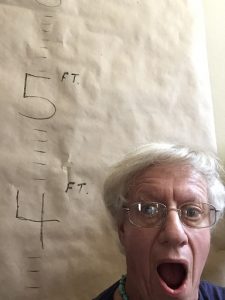 Twenty-six years ago I answered a classified ad from the woman who would become my wife. The only physical attribute that Jacqueline included in her cerebral ad was that the guy should be at least 5’9”, which I was—or so I think. Perhaps then, in my forties, the shrinking process had already begun.

In any case, the next time I checked—years later—I measured in at 5’8½”. I reported this to my bride, reminding her that it came in under her minimum. She said that she’d keep me anyway.

But I was not—repeat, NOT—prepared for what happened last week. Seeing that I had just turned seventy, my doctor ordered a bone density scan. The good news: zero osteoporosis in these old bones. The other news: I measured in at 5’7½”!!! Holy crap! Once again I let Jacqueline know, and she reminded me that she had also shrunk over the course of our twenty-six years together. So all is well on the home front.  🙂

HOUR BY HOUR HE GETS SMALLER AND SMALLER! 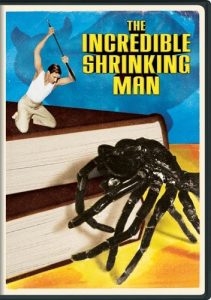 This measurement misadventure made me think of a much-loved movie from the 1950s, the golden age of low-budget sci-fi/horror. The Incredible Shrinking Man, a 1957 classic starring Grant Williams, boasted a screenplay by the late, great Richard Matheson, derived from his 1956 novel, The Shrinking Man. I have quite a few favorites from this era, and this was definitely one of them.

With the above tagline (one of many) and a spoiler alert in place, here is the story, which is fast-paced (eighty-four minutes) and for the most part is narrated by the main character, Scott Carey, who is on screen by himself a lot of the time. Scott and his wife, Louise, are enjoying a vacation aboard his brother Charlie’s small boat. When Louise goes below to grab a couple beers, a weird mist passes over the boat and leaves Scott with glowing particles covering his body.

Flash forward six months: Scott, a salesman who works for his brother, finds that his clothes are too big on him. Convinced that he’s shrinking, he visits his family doctor, who proclaims him to be in excellent health and says that people just don’t shrink. Louise also dismisses his concerns, until she realizes that she no longer has to stand on tiptoes to kiss him. 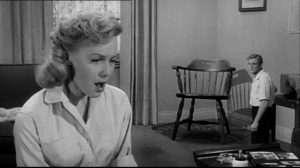 Scott is not being nice to Louise.

THE MEDIA SMELLS A STORY

Following a series of x-rays the doctor is soon convinced that Scott is shrinking. He sends Scott to a research lab, where they determine that Scott’s recent exposure to an insecticide being sprayed, along with the radioactive mist from six months ago, has rearranged Scott’s molecular structure and caused his cells to shrink. The scientists’ first goal is to halt the shrinking process. Scott can only wait.

Soon, little more than three feet tall, Scott can no longer work. Charlie, his brother, suggests that he sell his story to the media, and also start a journal for a possible book deal. Scott does this, but it backfires when reporters and looky-loos alike camp out on his front lawn, the doorbell and phone ring incessantly, all of this making his and Louise’s life a living hell. Scott has also become tyrannical with his loving, patient wife. How much can she stand? 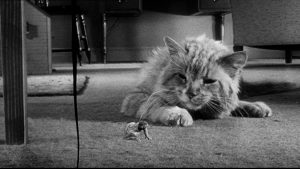 Then, the scientists give Scott some hopeful news: they believe that they’ve come up with an antidote that will prevent Scott from getting any smaller. Great, but what about him growing back to normal size? They’ll keep at it, they say, but it’s going to take a miracle. So he’s going to be three feet tall forever? More than likely, he’s told.

Scott lives with this prospect for a while, until one night, growing despondent, he ventures out of the house by himself. At a coffee shop he meets Clarice, a beautiful midget who is in town with a carnival. Shorter than him, she is upbeat and says that life can be great, even having to live it as a small person. This inspires him, and he resumes work on his book. They continue to meet, until the day Scott realizes that Clarice is now taller than him. The antidote failed; he’s still shrinking. He goes ballistic and runs off.

Scott is now under a foot tall and lives in a dollhouse that Louise has set up in their living room. He treats her even worse, all the while contemplating suicide. One day, with Louise off running an errand, the family cat attacks Scott, who plummets into the cellar. Louise returns to find a scrap of his clothing with blood on it and is devastated. Charlie urges her to move out of the house as quickly as possible. The world is saddened to learn about the death of Scott Carey, the Incredible Shrinking Man. 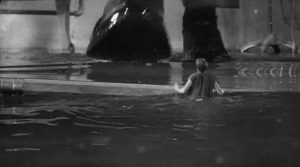 Scott cannot get his brother’s attention.

Scott, of course, is alive, and he is determined to conquer his new world, the cellar, while hoping that Louise will come down and find him. His challenges: hunger, a spider, and the fear of continuing to shrink down to nothing. With a weapon and tools fabricated from pins and thread in Louise’s sewing box, he scales a table to gather crumbs from a piece of cake that his wife left there. His water comes from a drip in the water heater. He takes up residence in a matchbox.

The next day he is awakened by a flood—the water heater has burst. Charlie and Louise come down to turn it off, while Scott, close to drowning, is unable to make them hear him. They leave the cellar, and finally the house, while Scott is nearly washed down the drain.

THERE IS NO ZERO 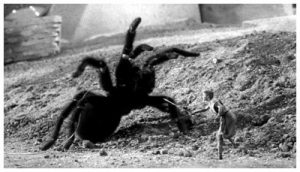 Scott has an enemy in the cellar.

His food ruined, Scott must again climb up for more. This time, he notices, the spider is in its web, which is attached to the piece of cake. He confronts the “monster,” killing it. Briefly unconscious, he awakens to find that he is now small enough to leave the basement through the squares of a window screen, which he could not fit through the previous day. But now, rather than fearing that he might shrink down to nothing, he accepts the prospect of seeing what lies beyond, in smaller worlds. He concludes a lengthy monologue with the following: 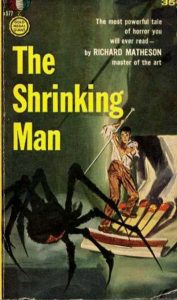 The Incredible Shrinking Man is a sometimes heartbreaking, oftentimes inspirational story from the creative mind of a master. Richard Matheson, who I had the honor of meeting a long time ago, is one of my favorite writers. This film won a Hugo Award for Best Dramatic Presentation back in the day, and in 2009 the Library of Congress added it to the National Film Registry for being “culturally, historically, or aesthetically significant.” That’s quite a legacy for this gem.