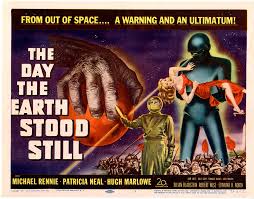 In a recent post about movie quotes I used the most familiar one from the 1951 classic, The Day the Earth Stood Still. Though I hadn’t seen the movie in a long time, I still remembered the alien catch-phrase from it: “Klaatu barada nikto.” So I decided the time had come to revisit an old friend, and after watching it I realized that its message still resonated today, over six decades later.

“WE COME IN PEACE” 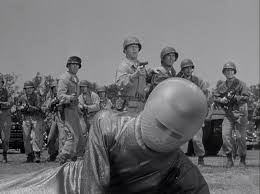 Paranoia ruled in 1951, what with WWII only a few years in the rearview mirror, the Korean War underway, and the Cold War causing folks to look for Commies in their closets. Into this world, a flying saucer lands in Washington, DC. As stunned citizens—and armed soldiers—look on, the saucer opens up and out steps a hooded humanoid named Klaatu (the fine British actor, Michael Rennie), followed by a huge metallic robot he calls Gort. He professes peace, but when he presents a device meant as a gift for the President, a nervous soldier shoots him. Gort proceeds to zap all the weapons, which sends the masses scurrying but does not injure anyone. With the military’s apologies, Klaatu is taken to Walter Reed Hospital for treatment as Gort stays motionless by the spaceship. 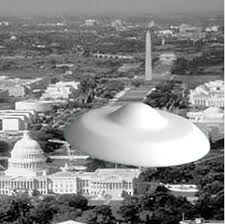 No restricted airspace back then.

When an emissary from the President visits Klaatu the next day, we see that the alien has already healed himself with some miraculous salve—child’s play where he comes from. His request is that the President summon the heads of state from every country for an important message that will affect everyone on Earth. Given all the political hate and mistrust, this is impossible, Klaatu is told. He also realizes that they’ve made him a prisoner.

In an effort to better understand earthlings, Klaatu escapes and, calling himself “Mr. Carpenter,” takes a room at a boarding house. There, both on television and radio and in the newspapers, he experiences the media sensationalizing the fact that the “monster” from the spaceship is at large and more than likely to suck out everyone’s brains or zap them with death rays. What? The media blowing a story out of proportion over sixty years ago? Right; that has never changed—think Y2K or Ebola, among a million others.

Klaatu befriends a widow named Helen Benson (Patricia Neal, an Academy Award winner) and her young son, Bobby. When Helen leaves to spend a day with her asshole boyfriend, Tom, Bobby shows “Mr. Carpenter” the town. In the film’s most poignant scene, Bobby takes Klaatu to visit his soldier dad’s grave at Arlington National Cemetery. The alien is stunned to see the numerous headstones and learn that just about all those buried there had died in wars. 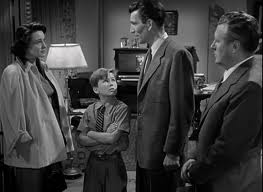 The boarding house residents are curious about “Mr. Carpenter.”

After a visit to the flying saucer and a stop at the Lincoln Memorial, where Klaatu is impressed by the words of our sixteenth president, he asks Bobby who he thinks the world’s greatest living person might be. The boy’s answer: Professor Barnhardt, a renowned scientist. He takes Klaatu to Barnhardt’s house. The professor is out, but Klaatu sees an incomplete mathematical equation on a blackboard, adds the answer—piece of cake for him—and leaves his address with the housekeeper.

That evening, Barnhardt sends a car for Klaatu. They meet, and the alien reveals himself and explains his mission. His is one of numerous peaceful planets that fear our world, having created atomic power, will eventually develop space travel and bring its warlike ways into the galaxy. If the Earth doesn’t get its act together, it risks being eliminated. Barnhardt understands, and he promises to summon all of the world’s greatest minds to receive the message and take it back to their respective countries. He also suggests that Klaatu arrange a worldwide demonstration of power that will scare the crap out of everyone without harming a soul.

Late the next night, Bobby sees “Mr. Carpenter” leave the boarding house. Curious, he follows him. Klaatu returns to the spaceship and uses a flashlight to signal Gort, who knocks the guards on duty unconscious. He then enters the craft, and Bobby, scared shitless, runs home. Once inside, this ET phones home to arrange the demonstration with his people.

Bobby waits up for his mother, who had been out on a date with Tom, and frantically tells his tale. Helen thinks her son is delusional, but Tom, searching Klaatu’s room, finds some evidence that might support the story. They decide to sleep on it.

Klaatu makes the decision to confide in Helen, and just before noon the following day he seeks her out where she works. They get into an elevator, and as he spills the beans, the power goes off—not only in the elevator but everywhere in the world. This is the demonstration he’d arranged. Only essential power—planes in the air, hospitals, etc.—remain on, showing what the aliens are capable of.

The blackout ends half an hour later, but by this time there is major panic. Helen tells Klaatu to go back to the boarding house and wait there until it is time to address the top minds that Prof. Barnhardt has summoned to Washington. She then seeks out Tom to tell him to keep his mouth shut, but the asshole, seeing the glory in being the one to nail the alien, calls the military. Helen tells Tom to fuck off—in a 1951 way, of course. 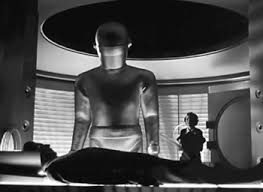 Gort tries to bring Klaatu back to life.

Let’s call a spoiler alert on the rest of this. Helen races to the boarding house to get Klaatu and take him to Barnhardt’s house, where he can hide out until the meeting later that day. The military takes up pursuit of the taxi they’re in, and Klaatu tells Helen that if anything happens to him, she must go to the robot and say, “Klaatu barada nikto,” otherwise it will destroy the Earth. Sure enough, the soldiers kill Klaatu. Helen heads for the spaceship, where she sees Gort awaken and zap two guards. She recites the well-known line as it comes for her next, saving her from disintegration. Instead, it carries her into the ship then trundles off to retrieve Klaatu’s body from where the military is holding it. Before Helen’s stunned eyes Gort reanimates the corpse. Klaatu tells her that the resurrection is temporary; even his advanced people cannot cheat death. 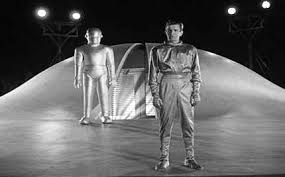 Klaatu issues a warning to Earth before hitting the road.

Outside, Barnhardt and the great minds have gathered for the meeting, not knowing that Klaatu had been killed. Helen and Klaatu soon emerge from the saucer, and the alien makes an impassioned speech for the countries of Earth to not bring their violent tendencies to the stars when they inevitably perfect space travel. His world and others have given the power of enforcement to a race of robots like the indestructible Gort. They’ll be watching you, he says. Engage in peaceful exploration, no problem. Otherwise, say goodbye to planet Earth.

With a smile and a wave at Helen, Klaatu gets back into the spaceship. How long he’ll remain alive is open to speculation—but no matter. The craft fades into the blackness of space, leaving a lot of chastened people behind. End of story.

A powerful message, to be sure. Let’s hope that future generations won’t have to learn it the hard way.

My new historical novel, Stone Woman, is now available in both eBook and paperback on Amazon. Anna Lee Waldo, author of the mega-bestseller, Sacajawea, says, “Stone Woman is an enthralling novel with fast-moving action, romance, and historical detail. Winema is the wilderness—its strength, its savagery, and its untamed power. She is as beautiful and tender as her name translates: Woman of the Brave Heart.”