Throwback Thursday: The Year Of The Wolf

Hollywood films tend to run in cycles…yes, even lunar cycles. 😊 This post first ran in 2016. 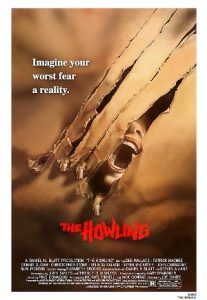 Who knows, maybe there were a few extra full moons in 1981. Whatever the case, Hollywood appeared to wax lycanthropic with three wolf-themed films, including today’s subject, The Howling. The other two, which I’ve already written about, were Wolfen (see my post, Wolf Spirits in the Old ’Hood) and An American Werewolf in London.

NOT YOUR AVERAGE SERIAL KILLER

I initially considered writing about The Howling as a Guilty Pleasure, but guess what, research revealed that it did not fit my parameters. It did reasonably well at the box office, and it garnered some decent reviews, much of it due to its special effects and makeup—state of the art for 1981. And its ending…well, let us just say that it is one of the most memorable in all of horror filmdom. 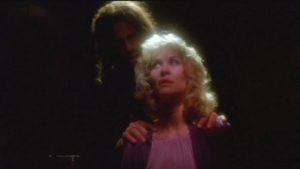 The story, with no spoiler alert: Karen White (Dee Wallace), an anchorwoman for a Los Angeles TV station, has been communicating with a serial killer named Eddie, who has been terrorizing the city. Working with the police, she agrees to meet Eddie in a porno shop. When she sees him, Karen screams and blacks out. The cops gun Eddie down. Karen remembers nothing of the incident, and in order to deal with her amnesia, consulting shrink Dr. George Waggner (Patrick Macnee; yes, Mr. Steed!) sends her, along with husband Bill (Christopher Stone), to The Colony, a secluded resort up around Big Sur, for therapy.

Karen’s friends and co-workers, Terri and Chris, investigate Eddie and discover disturbing sketches of wolf-like creatures in his apartment. They visit the morgue and ask to see his body. Surprise, it is missing. Looks like he clawed his way out.

A CAST OF WEIRD CHARACTERS 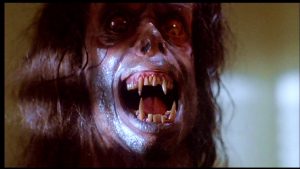 The Colony, as Karen and Bill quickly discover, is chock full of oddball people, including a sexy nymphomaniac named Marsha Quist, who wastes no time hitting on Bill. He’ll have no part of it…until he’s attacked and scratched on the arm by some kind of animal as he walks back to their cabin. Karen, who has begun to suspect there is something strange about The Colony and its residents, asks Terri to join her there for moral support.

Late at night, as Karen sleeps, Bill answers a summons from the woods and meets Marsha there. As they engage in rough sex, they transform into werewolves. (Quite a scene, I kid you not.)

The next day, while exploring The Colony, Terri spots a seascape that looks familiar. She matches it with one of Eddie’s sketches, linking him to the resort. The killer is, in fact, Eddie Quist, brother of Marsha and the equally weird T.C. Now stalked by T.C., Terri winds up in the Quist cabin (where else?), where she finds more of Eddie’s sketches. T.C., now a werewolf, tries to kill her, but she cuts off half his arm and escapes. She hurries to Dr. Waggner’s office and phones Chris, who tells her to look for a file on Eddie Quist. She finds it—and she also finds Eddie, in werewolf form. Chris can only listen as Terri is killed. 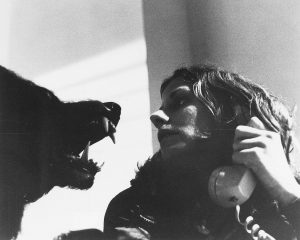 Terri’s phone call is about over…

Karen, seeing nasty scratches on Bill’s back, realizes that he cheated on her. She tells him to piss off and goes to Waggner’s office to inform him that she’s headed back to L.A. Instead, she finds Terri’s body and is confronted by Eddie, now in human form but not looking too good. He undergoes a full transformation in front of the horrified Karen, who manages to toss a beaker of acid into his face. She tries to flee but is captured by the other residents, all of whom—including Dr. Waggner—are werewolves.

After hearing Terri murdered, Chris has been furiously driving north with a rifle and a box of silver bullets. Yeah, he’s figured it out. But will he get there in time to save Karen?

And that is where I will leave you. As mentioned, the ending is rather amazing. If you’ve seen it, you know what I mean. If not…well, enjoy. The Howling, based on a 1977 novel by Gary Brandner, spawned a bunch of sequels, but as usual, nothing can top the original.