Wolf Spirits In The Old ’Hood

I grew up in The Bronx, New York City’s northernmost borough, before leaving it for good in 1967 after graduating college. For the first fourteen years I lived in the South Bronx, until urban decay began to set in, sending my family to a nicer part of town. Through the ’60s and ’70s that part of the South Bronx—especially the area around Charlotte Street, a few blocks from where I lived—deteriorated to the point that then-President Jimmy Carter called it “the worst slum in America.”

Which brings me to one of my favorite old movies, Wolfen.

Released in 1981 and based on The Wolfen, a novel by Whitley Strieber, the film opens with an overhead shot of a neighborhood that looks much like a war zone. Deserted 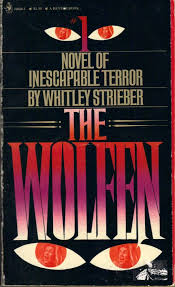 streets, rubble everywhere, buildings totally gutted, a few junkies warming their hands over burning ashcans. We see an empty old church, a focal point of the story, and as our two main characters approach the church a bit later we clearly see a street sign. It says, “Charlotte Street.”

I had heard stories of the increasing blight in the South Bronx through the ’70s, had even seen photos, but nothing prepared me for this raw sight of the ’hood that I’d once called home. Yeah, that’s where they filmed a considerable portion of Wolfen. So let me first talk about this movie, and then I’ll finish the real story of Charlotte Street. Sneak preview about the latter: it has a remarkable ending.

IT WILL TEAR THE SCREAM FROM YOUR THROAT

A rich guy named van der Veer has decided to build condos on and around Charlotte Street, but someone—or “something”—doesn’t like that idea. After breaking ground he and his wife take a drive down to Battery Park in the wee hours. That “something” stalks and kills them, along with their chauffeur, and we witness this through the eyes of the “something” in what looks like thermography or night vision. 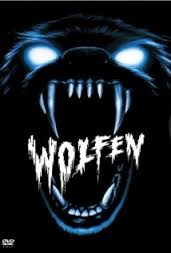 criminal psychologist, Rebecca Neff (Diane Venora). At this point most believe the killings to be the work of a terrorist group called Gotterdammerung, but Wilson is skeptical.

Soon after, a junkie is killed outside the Charlotte Street church, and the similarities of his death and that of the van der Veers sends Wilson and Neff to investigate. Inside, something is watching them, and Neff, thinking she hears a baby’s cry, climbs the steps. Sensing the presence, Wilson pulls her down, and they run away as two glowing eyes watch.

An outrageous coroner named Whittington (Gregory Hines) discovers non-human hairs on the victims and shows them to a zoologist friend, who identifies them as being in the wolf family. He also compares them to Native Americans, which gives Wilson an idea. The zoologist later goes looking for the creatures, and unfortunately he finds them.

Wilson questions Eddie Holt (Edward James Olmos), a Native American and former activist that he once arrested and sent to prison. Holt’s evasive answers about shape shifters lead Wilson to follow him later that night. Holt goes to the beach, strips down, runs around and howls at the moon, eventually menacing Wilson. He then relents and tells Wilson that shape shifting is all in the mind. Wilson thinks that he’s full of crap and considers him a prime suspect.

Whittington tells Wilson that he’ll go with him to The Bronx to stake out the church and investigate. While Wilson looks around, a well-armed Whittington watches him from another building. A huge black creature, wolf-like in appearance, kills Whittington. 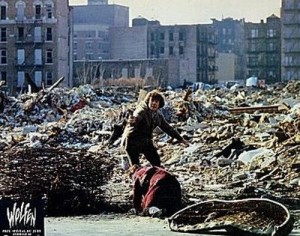 My neighborhood in The Bronx, not long after I left.

Wilson, devastated by his friend’s death, goes to a bar where many Native Americans hang out. There, Holt and a character called Old Indian tell him that the killers are not wolves, but Wolfen, or wolf spirits. They have been around for millennia (“They might be gods,” Holt says), sharing their land with humans, but now their hunting grounds have been overrun by the great cities. So for a long time now they have subsisted on the dregs of humankind, people who would have died soon anyway—like the junkie on Charlotte Street, who had a diseased liver. They kill only to protect their home—in this case the old church. Holt tells Wilson that he cannot fight the Wolfen, saying, “You don’t have the eyes of a hunter, you have the eyes of the dead.”

SPOILER ALERT: Wilson, needing to think, returns to the van der Veer offices on Wall Street, where a huge model of the proposed condo complex sits on a table. As realization begins to dawn regarding why the Wolfen would kill van der Veer, Wilson’s boss, Warren, shows up with Neff. Warren tosses a wolf skin at Wilson and tells him that the case is closed, that the Gotterdammerung organization uses the wolf as their symbol. All is well, right? 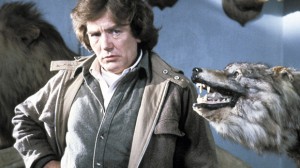 Wrong-o. The three walk outside to Warren’s car but are suddenly surrounded by the Wolfen, who have materialized before them. Wilson warns the others to stay cool, but Warren panics and races for his car, gun blazing. He first loses his hand, then his head, as Wilson, firing at the car and exploding it to distract the Wolfen, grabs Neff and heads back up to the office.

So they’re safe, right? Wrong again. The Wolfen materialize in the office, this time with the leader of the pack, a huge, beautiful white wolf. Wilson meets its gaze, pours the bullets from his gun, puts it down, and proceeds to destroy the model of the condo complex, indicating that the project will never happen. The white wolf howls in acknowledgement, and the pack disappears. We see them returning to the old church on Charlotte Street.

Wilson is now satisfied to let Gotterdammerung, which has done some unspeakable things, take the fall for the killings in New York. In a closing voiceover he says, “In arrogance man knows nothing of what exists. There exists on this earth such as we dare not imagine; life as certain as our death, life that will prey on us as surely as we prey on this earth.”

CHARLOTTE STREET: FROM THE ASHES

So what happened to Charlotte Street and the surrounding neighborhood? Well, it’s a long story—but as Ray Kinsella says in Field of Dreams, “it’s a really good story.” You can read all of the details in an article published in 2009 by CNNMoney, titled, “The Greatest Real Estate Turnaround Ever.” That title alone speaks volumes.

Short version: the deterioration went on all through the ’70s, with fires raging almost endlessly. As Howard Cosell told the world during the 1977 World Series a few miles away at Yankee Stadium, “The Bronx is burning.” 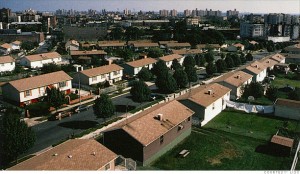 Then, the turnaround began, fueled by area residents, a city agency, and a nonprofit that received a grant from the Ford Foundation to aid with inner city neighborhood revivals. In 1983 the first pre-fab homes, manufactured in Pennsylvania and trucked to The Bronx, went up on Charlotte Street. They sold for a little over $50,000. Within a few years close to a hundred houses stood on the street, in an area now called Charlotte Gardens. Today they sell for half a million dollars or more. The blight, the old church, the junkies, the arson fires are no more. And the wolf spirits have moved on to happier hunting grounds.

Thomas Wolfe said, “You can’t go home again.” But maybe—just maybe—I might have to visit the old ’hood someday.